RotoWire is your premium fantasy sports resource. We pioneered real-time fantasy sports news and Player Notes back in 1997 when the Internet was just taking flight.

We've stayed ahead of imitators with the most in-depth analysis, the fastest real-time news and the largest scope of coverage of any fantasy sports site or app.

Our quality has won us many industry awards – it's why we have high-profile partners such as ESPN, Yahoo! Sports, Fox Sports, CBS Sports, DraftKings and NBA.com.

We are proud suppliers of syndicated sports content to some of the best partners in the industry.

For more information on how you can partner with us, go here or contact us directly with any questions you might have.

Our staff does very well in experts leagues, as evidenced by our recent titles:

In 1997, three Northwestern graduates, Peter Schoenke, Jeff Erickson and Herb Ilk, came up with an idea that changed the fantasy sports market forever: to provide real-time news and analysis for fantasy sports junkies like themselves. RotoNews.com was born and revolutionized the industry.

Not long after they launched the site, the founders realized that the demand for real-time information was beyond even their wildest expectations. Suddenly, RotoNews was consistently ranked among the 10 largest sports sites in surveys by both Media Metrix and PC Data, topping such sites as FoxSports.com. RotoNews became so big that the owners decided to chase the same dot-com bubble as everyone else and sold the company to a West Coast corporation in 1999. In 2001 that company's management (which the RotoNews founders were not part of), misjudged the "new economy" and went bankrupt. RotoNews.com was stuck in bankruptcy limbo.

The RotoNews team decided to march on and continue to provide the fantasy news, information and commissioner services that served the industry so well, but as a new business: RotoWire.com. The tremendous changes in the Internet advertising market also caused the business model of the new web site to change and our content went from free to a pay model.

The same editors, writers, and programmers that made RotoNews.com the leading brand for fantasy news on the Web created RotoWire.com. Since our RotoNews days we've added some new faces, but the core group remains the same. Peter Schoenke, Jeff Erickson, Chris Liss, Jason Thornbury, Mike Doria, Tim Schuler, Tim McCaigue, Shannon McKeown and Herb Ilk form the RotoWire.com team along with a large network of writers that kept our coverage the best on the web.

Our goal is the same from back when we started: to be the best resource of real-time information and draft preparation for fantasy players anywhere. The business model may have changed, and competitors and knock-off copycats of our original concept may have emerged, but few will deny we still produce the most timely and thorough information on the web.

We're constantly trying to improve upon our original concept, so please give us your feedback. What can we do better? Please let us know.

Partnered With Names You Trust 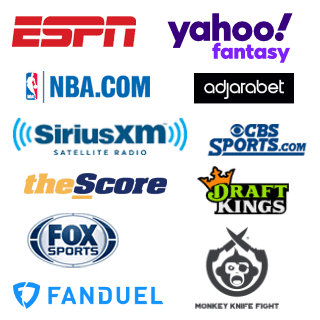