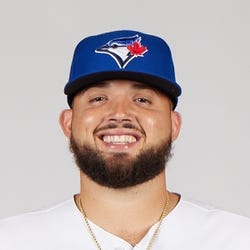 2022 Stats
W-L
16-7
ERA
2.24
WHIP
0.99
K
180
SV
0
2023 Projections
W-L
ERA
WHIP
K
SV
Unlock Our Projections
2023 Fantasy Outlook
Manoah had a fantastic sophomore season embracing the role of staff ace and performing like one for those fantasy managers who took the leap of faith with the big guy. The strikeout rate was not as strong as hoped, but he cut down on his walks and was once again one of the toughest pitchers in the league to hit. The slider was once again his bread and butter pitch, but he can still overpower hitters with the fastball and the changeup took a very nice step forward in 2022 becoming more of a weapon against lefties than it was in his rookie season gaining some whiffiness along the way. He has never had a season at any level where he has worked anywhere near the volume he worked in 2022, but his physique could insulate him from the regression we have seen from other younger arms who have gone through similar workload spikes in their mid 20s. Quite honestly, that is the only risk here because all the arrows point in a positive direction for him this coming season. Read Past Outlooks
read more
RANKSFrom Preseason
#

* Exit Velocity, Barrels/BBE %, Balls Hit 95+ MPH %, and Spin Rate are benchmarked against 2019 data (min 120 IP). See here for more exit velocity/barrels stats plus an explanation of current limitations with that data set.
K/BB
3.53
K/9
8.2
BB/9
2.3
HR/9
0.7
Fastball
93.7 mph
ERA
2.24
WHIP
0.99
BABIP
.255
GB/FB
1.04
Left On Base
81.1%
Exit Velocity
80.5 mph
Barrels/BBE
3.1%
Spin Rate
2249 rpm
Balls Hit 95+ MPH
19.9%
Swinging Strike
11.5%
Prospect Rankings History
View Complete Alek Manoah Prospect Ranking History
Advanced Pitching Stats
Loading Advanced Pitching Stats...
Defensive Stats
Loading MLB Defensive Stats...
Stats Vs Today's Lineup
Want more matchup stats?
View Alek Manoah vs. Batter Stats
Loading Matchup Stats...
Blue Jays Depth Chart
Our full team depth charts are reserved for RotoWire subscribers.
Subscribe Now
Recent RotoWire Articles Featuring Alek Manoah
2023 Fantasy Baseball Rankings - Way Too Early Top 300 Draft Ranks
48 days ago
48 days ago
James Anderson provides a way too early top 300 rankings for those who have the itch to start drafting for 2023.
MLB Picks: Expert MLB Bets for Friday, October 7
61 days ago
61 days ago
Michael Rathburn shares his best bets for Game 1 of the Wild Card Round.
DraftKings MLB: Friday Breakdown
61 days ago
61 days ago
The playoffs have begun and Chris Morgan likes Toronto pitcher Alek Manoah, who’s been on fire, recording a 1.00 ERA over his last seven starts.
Yahoo DFS Baseball: Friday Wild Card Round Picks
61 days ago
61 days ago
Mike Barner offers his top plays for Friday's Wild Card Round Yahoo DFS contests, including the surprisingly affordable Paul Goldschmidt.
Past Fantasy Outlooks
2022
2021
2020
Lance Lynn's physique doppleganger had an excellent rookie season, helping Toronto stay in the postseason race until the season's final day. His size and deception were tough for the league to pick up as he had greater than 30% Whiff rates on both his four-seamer and slider last season while the league hit .200 or worse against both offerings. The slider was particularly filthy with its ability to head toward home plate and seemingly change lanes like tourists driving on the interstate near Disney World out of nowhere. A slip on the dugout stairs leading to the IL and a five-game suspension for intentionally hitting Maikel Franco were the only blemishes on an otherwise stellar rookie resume. The next challenge for him is going to be working on the changeup to keep lefties at bay as lefty-laden lineups were more of a challenge while righties often walked back to the dugout in frustration.
Last season was supposed to be Manoah's breakout, but as with most prospects, the pandemic set a different course. After spring training got put on hold, he opened a gym in a Miami warehouse with his brother, where he worked on his strength and conditioning with regular games of catch mixed in. Manoah then headed to the Jays' alternate training site where he worked all summer on his changeup, among other things. At 6-foot-6, 270 pounds, Manoah has a CC Sabathia/Aaron Harang type of body that will generate skepticism from many, but so far it has not hindered his development. His mid-90s fastball (touches 98) and putaway slider remain, and he is now confident enough in his changeup to throw it to same-handed hitters in a full count. Without a full season to build up endurance, Manoah spent this offseason working on endurance and lower-body training. His breakout season may just be a year behind schedule.
Manoah arguably has the highest ceiling among the college pitchers selected in the 2019 draft, but there are a couple areas of concern. First, he did not demonstrate starter-level strike-throwing ability until his final year at West Virginia. Secondly, his 6-foot-6, 260-pound physique is matched by very few big-league starters -- CC Sabathia and Aaron Harang come to mind as having comparable bodies when they broke in as starting pitchers. That said, he has a plus mid-90s fastball with movement and a hard slider that could develop into a second plus pitch. Only his good traits were on display in a 17-inning debut in the Northwest League, where he logged a 39.7 K% and 7.4 BB%, but he never went more than four innings in an outing. He should be sent to Low-A or High-A for his first full season, where he will be tasked with getting more consistent with his slider, refining his changeup and honing his command.
More Fantasy News