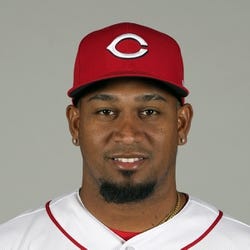 2022 Stats
W-L
7-3
ERA
1.84
WHIP
0.96
K
83
SV
10
2023 Projections
W-L
ERA
WHIP
K
SV
Unlock Our Projections
2023 Fantasy Outlook
Diaz bypassed Triple-A entirely, making the jump from Double-A to the majors last season after making the Reds roster out of spring training. Edwin's younger brother quickly emerged as a key bullpen piece for Cincinnati, going from middle relief to high leverage by mid May. Both his fastball (65% usage) and slider (35%) were extremely effective, as his xBA was in the 99th percentile while his strikeout and whiff rates were also elite. Not all was great, as the rookie had a high walk rate (12.9%), and an extreme fly ball percentage (54.5%) that yielded a .178 BABIP that was second lowest among qualified relievers. Ultimately, Diaz was a stabilizing presence within an otherwise inconsistent bullpen. He should be the favorite to close games for the Reds to start 2023, but keep in mind David Bell has deployed a committee the last two years and several injured relievers (Antone, Sims, Santillan) will be returning next season. Read Past Outlooks
read more
RANKSFrom Preseason
#