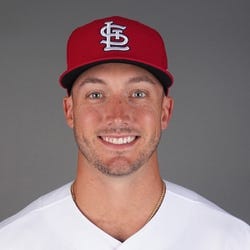 2022 Stats
AVG
.215
HR
4
RBI
25
R
28
SB
0
2023 Projections
AVG
HR
RBI
R
SB
Unlock Our Projections
2023 Fantasy Outlook
Knizner played more than expected last season as the Yadier Molina retirement tour was interrupted by a long IL stint for a sore knee. To say Knizner took advantage is a backhanded compliment considering his wRC+ was 79, albeit higher than the prior year's 50 mark. His 21% contact rate isn't the issue; he just doesn't hit the ball with much authority. There was a time the Cardinals hoped Knizner's strong contact skills would support a developing hit tool but signing Willson Contreras suggests they've changed their mind. Knizner is earmarked to back up Willson Contreras, but his hold on the job is tenuous as Knizner is a subpar defender and Jose Herrera looms. If Knizner is on top of your queue, you need a longer queue. Read Past Outlooks
read more
RANKS
#597
ADP
#

* Exit Velocity and Barrels/PA % are benchmarked against 2019 data (min 400 PA) and Hard Hit Rate is benchmarked against last season's data (min 400 PA). See here for more exit velocity/barrels stats plus an explanation of current limitations with that data set.
BB/K
0.42
BB Rate
8.9%
K Rate
21.2%
BABIP
.268
ISO
.085
AVG
.215
OBP
.301
SLG
.300
OPS
.601
wOBA
.277
Exit Velocity
86.0 mph
Hard Hit Rate
26.6%
Barrels/PA
2.4%
Expected BA
.219
Expected SLG
.306
Sprint Speed
22.4 ft/sec
Ground Ball %
44.9%
Line Drive %
17.2%
Fly Ball %
37.9%
Prospect Rankings History
View Complete Andrew Knizner Prospect Ranking History
Advanced Batting Stats
Loading Advanced Batting Stats...
Additional Stats
Games By Position
Defensive Stats
Loading Games Played by Position...
Loading MLB Defensive Stats...
Batted Ball Stats
Loading Batted Ball Stats...
Stats Vs Upcoming Pitchers
Want more matchup stats?
View Andrew Knizner vs. Pitcher Stats
Loading Matchup Stats...
Cardinals Depth Chart
Our full team depth charts are reserved for RotoWire subscribers.
Subscribe Now
Recent RotoWire Articles Featuring Andrew Knizner See More
NL FAAB Factor: Waiver Pickups of the Week
181 days ago
181 days ago
With only a couple days before the trade deadline, Jan Levine checks out a few NLers who could benefit from upcoming transactions.
NL FAAB Factor: Waiver Pickups of the Week
188 days ago
188 days ago
Jan Levine covers a couple pitchers whose returns have been highly anticipated, including one who hasn't appeared in the majors since 2020.
NL FAAB Factor: Waiver Pickups of the Week
195 days ago
195 days ago
Jan Levine analyzes the logjam that is the Padres outfield.
NL FAAB Factor: Waiver Pickups of the Week
223 days ago
223 days ago
Jan Levine highlights a few players who may be ready to return soon, including a certain Cincinnati outfielder.
Past Fantasy Outlooks
2021
2020
2019
There have been a few catchers of the future in St. Louis throughout Yadier Molina's 30s, and Knizner might be the one in the right place at the right time when the veteran finally leaves town. He made the expanded Opening Day roster as a third catcher but received very few opportunities throughout the season, coming to the plate just 17 times, a sample small enough that analyzing his .250/.235/.313 slash line would be a waste of time. Knizner's minor-league numbers and prospect reports are worth most of the attention if the Cardinals don't bring in anyone to start ahead of him over the winter. He's considered an offense-first backstop, which is what you'd want for fantasy purposes but which means his shaky glove puts a lot of pressure on his bat if he's to remain in the lineup. His 99 wRC+ at the Triple-A level in 2019 hardly suggests he's about to tear up the league, but he could still be a useful option.
Knizner got his first taste of the majors in 2019, appearing in 18 games with the Cardinals. He didn't do much during his time in the big leagues, hitting .226 in 58 plate appearances. It would be rash to rush to judgment based on the limited sample size as Knizner has demonstrated a much more impressive hitting acumen in the minors. He hit a solid .276 in 66 games with Triple-A Memphis in 2019 after batting well above .300 across two levels over the previous two seasons. While Knizner's 24.1 K% in the majors last season took a toll on his batting average, his strikeout rate has never exceeded 13.2% in any minor-league campaign, thus it's fair to expect less whiffs from Knizner as he adjusts to major-league pitching. Knizner has been tapped as the successor to Yadier Molina in St. Louis, and that transition should accelerate in 2020 if Knizner is able to hold down a full-season backup gig.
With Carson Kelly shipped to Arizona in the Paul Goldschmidt trade, Knizner now lines up as Yadier Molina's backup and heir apparent behind the plate in St. Louis. With above-average batting lines at every stop of his three-year professional career, he offers enough offensive value to mostly offset his relatively poor defense. He hit .313/.365/.434 (119 wRC+) in 77 games for Double-A Springfield last year and followed that up with a similar .315/.383/.407 line (114 wRC+) in 17 games with Triple-A Memphis. Despite that short amount of time in Triple-A, Knizner will have a good shot to break camp on the 25-man roster. The 36-year-old Molina has received at least 500 plate appearances in nine of the last 10 years and was an All-Star yet again last season, but he's bound to break down at some point.
More Fantasy News