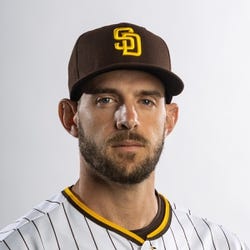 2022 Stats
AVG
.251
HR
4
RBI
40
R
40
SB
2
2023 Projections
AVG
HR
RBI
R
SB
Unlock Our Projections
2023 Fantasy Outlook
Nola is known more for his bat than his glove, but he struggled in both areas in 2022 with a .650 OPS and minus-six DRS. He played in 110 games and had a solid 8.9 percent walk rate, but he hit only four home runs and had a .290 wOBA. A .251 average was also about 20 points lower than his career mark, which is troubling since his. 284 BABIP wasn't a significant drop. Nola should open 2023 in at least a part-time role, but prospect Luis Campusano will be in the mix to start Opening Day and could be a lineup regular with a strong start to the campaign. Read Past Outlooks
read more
RANKS
#420
ADP
#

* Exit Velocity and Barrels/PA % are benchmarked against 2019 data (min 400 PA) and Hard Hit Rate is benchmarked against last season's data (min 400 PA). See here for more exit velocity/barrels stats plus an explanation of current limitations with that data set.
BB/K
0.57
BB Rate
8.6%
K Rate
15.1%
BABIP
.284
ISO
.078
AVG
.251
OBP
.321
SLG
.329
OPS
.649
wOBA
.291
Exit Velocity
89.4 mph
Hard Hit Rate
31.7%
Barrels/PA
1.8%
Expected BA
.256
Expected SLG
.351
Sprint Speed
23.8 ft/sec
Ground Ball %
42.6%
Line Drive %
20.6%
Fly Ball %
36.8%
Advanced Batting Stats
Loading Advanced Batting Stats...
Additional Stats
Games By Position
Defensive Stats
Loading Games Played by Position...
Loading MLB Defensive Stats...
Batted Ball Stats
Loading Batted Ball Stats...
Stats Vs Upcoming Pitchers
Want more matchup stats?
View Austin Nola vs. Pitcher Stats
Loading Matchup Stats...
Padres Depth Chart
Our full team depth charts are reserved for RotoWire subscribers.
Subscribe Now
Recent RotoWire Articles Featuring Austin Nola See More
DraftKings MLB: Friday Breakdown
100 days ago
100 days ago
Chris Morgan offers his picks for Friday’s Padres-Phillies game in which Ha-Seong Kim should hit well against Ranger Suarez.
DraftKings MLB: Tuesday Breakdown
103 days ago
103 days ago
Dan Marcus brings us his insights for Tuesday's DraftKings slate, which features Game 5 between Cleveland and New York, as well as Game 1 of the NLCS.
DraftKings MLB: Monday Breakdown
104 days ago
104 days ago
Dan Marcus looks over a hybrid DraftKings slate, which features Game 5 of the ALDS on Monday and Game 1 of the NLCS on Tuesday.
DraftKings MLB: Wednesday Breakdown
109 days ago
109 days ago
Dan Marcus previews a pair of NLDS games Wednesday, making his picks to help you craft an effective DraftKings entry.
The Z Files: NFBC Holdem Rankings and Strategies
111 days ago
111 days ago
Todd Zola shares his gameplan and his rankings for NFBC Postseason Holdem contests.
Past Fantasy Outlooks
2022
2021
2020
After years of pushing defensively minded players behind the plate, the Padres finally acquired a catcher who could hit and were excited to see what Nola could do over a full season of play in 2021. It was not meant to be as Nola played in just 56 games around a knee sprain which cost him a good chunk of the summer as well as a thumb injury later in the season which eventually sent him to the surgeon for repair. Those circumstances help explain the sizable drop in his power indicators while his ability to hit for average was still on display. Assuming he is healthy, he should have the majority of the catching duties while Victor Caratini caddies Yu Darvish and Jorge Alfaro spot catches when not needed as an outfield reserve. Nola is more of a gap power hitter, but his ability to hit for average is matched by few catchers.
Nola began last season with eligibility only at first base, but it wasn't long before he qualified at catcher, having taken over as Seattle's chief backstop with Tom Murphy sidelined. At the trade deadline, Nola was slashing .307/.377/.525, prompting a deal to the Padres. Nola slipped to .217/.314/.383 the final month but provided value with his glove. Despite the second-half swoon, Nola finished with a lower K% and higher BB% than his freshman campaign. He only has a career 451 MLB PA, but when analyzed in tandem with his minor-league history, Nola projects to offer a nice BA floor at a spot where most inflict harm. He also sports a HR/FB rate a tick above average with ample flyballs to contribute pop from behind the plate. San Diego has a crowded roster, but Nola's versatility should lead to ample volume, supporting a top-10 ranking at the position.
After spending parts of five seasons at Triple-A, Nola finally reached the major leagues at age 29. He even became a popular fantasy add, though he was appealing in large part because he was catcher-eligible, and unfortunately, he has lost that eligibility in most leagues heading into 2020 (seven appearances at catcher). As a 1B-only player in 20-game formats, with 2B-eligibility in leagues with a 15-game minimum, Nola is in the glut of fringe-useful position players. He was better than average in his 79 games with the Mariners, but it seems we can safely attribute a large portion of his 2019 success to the juiced ball, as Nola had never slugged even .400 at any stop prior to last year. The plate skills are strong enough for Nola to stick around in a super-utility role, but it's not a role that projects to be conducive to mixed-league relevance unless he were to regain C-eligibility in-season.
More Fantasy News