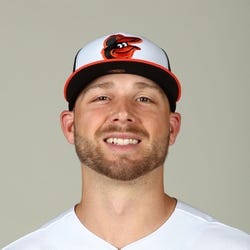 2022 Stats
W-L
5-4
ERA
4.34
WHIP
1.40
K
90
SV
0
2023 Projections
W-L
ERA
WHIP
K
SV
Unlock Our Projections
2023 Fantasy Outlook
Voth was atrocious to begin 2022 with the Nationals, taking a 10.13 ERA through 18.2 relief innings. He was DFA'd at the end of May, and a move across the Beltway proved valuable, as the right-hander closed the year with a 3.04 ERA, 1.23 WHIP and 72:25 K:BB across 83 innings with the Orioles. Still, he doesn't profile well as a starter, as his fastball sits around 94 mph and only yielded a 21.8 whiff rate last season. The 30-year-old looks most like a swingman -- he's a capable fill-in for starting duties when the need arises, but if the Orioles' top pitching prospects burst onto the scene in 2023, Voth could easily work as a low-leverage reliever. His career 21.7 percent strikeout rate and 35.8 percent groundball rate don't impress, so he'll need to keep the contact soft to avoid giving up crooked numbers frequently. Read Past Outlooks
read more
RANKSFrom Preseason
#

* Exit Velocity, Barrels/BBE %, Balls Hit 95+ MPH %, and Spin Rate are benchmarked against 2019 data (min 120 IP). See here for more exit velocity/barrels stats plus an explanation of current limitations with that data set.
K/BB
2.90
K/9
8.0
BB/9
2.7
HR/9
1.2
Fastball
93.5 mph
ERA
4.34
WHIP
1.40
BABIP
.330
GB/FB
0.96
Left On Base
73.5%
Exit Velocity
81.1 mph
Barrels/BBE
5.5%
Spin Rate
2575 rpm
Balls Hit 95+ MPH
23.9%
Swinging Strike
11.3%
Advanced Pitching Stats
Loading Advanced Pitching Stats...
Defensive Stats
Loading MLB Defensive Stats...
Stats Vs Today's Lineup
Want more matchup stats?
View Austin Voth vs. Batter Stats
Loading Matchup Stats...
Orioles Depth Chart
Our full team depth charts are reserved for RotoWire subscribers.
Subscribe Now
Past Fantasy Outlooks
2021
2020
2016
2015
Mainly due to injuries, the National have utilized Voth in the rotation when the truth is, it is a tough fit. Voth slings a handful of pitches to the plate with his curveball being the best offering of the bunch. Voth's best path to success is playing the contact-suppression game, mixing up his pitches and location to keep hitters off balance. It worked for a time in 2019 when the league hit below .200 off his fastball, which sits 90-93. When he struggles with command, it can quickly fall apart as it did last year when the league hit .330 off that same fastball. He added both a cutter and a splitter last season, but the cutter was just as hittable as the fastball while the splitter replaced the straight-change in his repertoire with slightly more success. Voth is likely the long man in the Washington bullpen for 2021 until someone breaks down.
After battling a shoulder injury in July and August, Voth came on strong for the Nationals down the stretch, posting a 2.61 ERA and 0.92 WHIP in four September starts. His success was a pleasant surprise as Voth had dampened flashes of potential with bouts of inconsistency throughout his minor-league career. The right-hander is equipped with a four-pitch arsenal that includes a fastball that clocks in at 91-93 mph and a curveball that rates as above-average. He has demonstrated solid command throughout most of his professional career and carried that over to the big-leagues last season, finishing with a 7.5 BB%. Voth isn't likely to challenge for a strikeout crown, but he posted a healthy 25.3 K% last season and is certainly capable of averaging a strikeout per inning. Though his role next season is unclear, a strong spring training could help Voth emerge as Washington's fifth starter in 2020.
After putting himself on the prospect radar in 2014, Voth solidified his status with a strong 2015 campaign at Double-A. Like Tanner Roark, Voth doesn't have the kind of stuff that makes scouts salivate, but he has good command of a fastball that can occasionally touch the mid-90s along with a plus curveball and developing change. His velocity can waver, though, putting him potentially on a path to the bullpen in the majors rather than the back of the rotation, especially given the competition rising through the Nationals system alongside him. Voth will begin the season at Triple-A and he's not yet on the 40-man roster, so he's a little less likely to get a crack at the majors in 2016 than you might expect, but injuries or underperformance could give him his first shot at the big leagues in the second half.
Drafted in the fifth round in 2013, Voth made a lot of scouts sit up and take notice with some truly outstanding numbers at Low-A and High-A last year, posting a combined 2.10 ERA, 0.91 WHIP and 114:29 K:BB ratio in 107.1 innings between the two levels. The 22-year-old right-hander stumbled at Double-A, and he doesn't have an outstanding fastball, typically sitting in the low 90s while occasionally touching 96, but he already shows strong command and control and his power curve and changeup are both potentially plus pitches down the road. If he can build up his frame and generate more consistent velocity, he could solidify a spot as a potential future member of the Nationals' rotation just behind Lucas Giolito and A.J. Cole, but even if he doesn't, Tanner Roark is currently showing what can be done with an arsenal and skill set similar to Voth's. He's not a high-ceiling prospect, but he is an intriguing one.
More Fantasy News