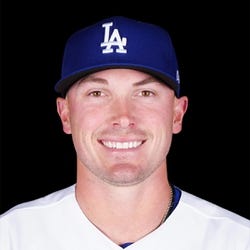 Calculate Stats Over Time
Just click on any two dates.
Loading Minor League Pitching Game Log...
Left/Right Pitching Splits
Since 2020
-48%
BAA vs LHP
2022
No Stats
2021
-36%
BAA vs LHP
2020
-62%
BAA vs LHP
Home/Away Pitching Splits
Since 2020
-50%
ERA on Road
2022
No Stats
2021
-67%
ERA on Road
2020
-25%
ERA at Home
Prospect Rankings History
Advanced Pitching Stats
Loading Advanced Pitching Stats...
Defensive Stats
Loading MLB Defensive Stats...
Stats Vs Today's Lineup
Want more matchup stats?
View Beau Burrows vs. Batter Stats
Loading Matchup Stats...
Recent RotoWire Articles Featuring Beau Burrows See More
DraftKings MLB: Monday Breakdown
August 9, 2021
August 9, 2021
Mike Barner tees up Monday’s DraftKings slate, rolling with a White Sox stack against the Twins.
Weekly Pitcher Rankings: Mad Max Road Fury
August 7, 2021
August 7, 2021
Todd Zola ranks the week's starting pitching as Max Scherzer gets a two-start week for the Dodgers.
Dream11 Fantasy Baseball: White Sox at Tigers
August 12, 2020
August 12, 2020
Juan Pablo Aravena breaks down Wednesday's White Sox at Tigers game for Dream11 contests.
AL FAAB Factor: Waiver Pickups of the Week
April 21, 2019
April 21, 2019
Erik Siegrist surveys the free-agent crop in the American League this week and sees signs that Hunter Dozier's performance to date might be for real.
Past Fantasy Outlooks
2018
2017
2016
A first-round pick in the 2015 draft, Burrows reached Double-A for the first time in 2017, throwing 76.1 innings with a 4.72 ERA. His 3.41 FIP suggests he deserved better. He struck out 22.7 percent of batters faced, though his 10.0 percent walk rate was a bit too high and his 38.8 percent groundball rate was a bit too low. Still, it was a strong showing from a 20-year-old in Double-A. Burrows features a solid fastball and a potentially above-average curveball and changeup, which gives him a ceiling of a third or fourth starter. The Tigers have little reason to rush any of their prospects right now given how far away they are from contention, so Burrows has little-to-no appeal in redraft leagues. In dynasty leagues, there are likely many options who are either closer to their major-league debut or have higher ceilings.
Burrows throws hard, has two workable offspeed pitches in his arsenal and posted a 3.15 ERA in 97 innings at Low-A in 2016. So what's the concern? Burrows saw an unusual drop in his strikeout rate once he hit full-season ball. Burrows fanned just 67 batters in those 97 innings. He does not have prototypical size either. Burrows just turned 20 years of age in September, and it is apparent that he is still honing his craft and perfecting his "out" pitches. Burrows also missed the final month or so of the minor league season with blister issues. Watch Burrow's strikeout numbers as he ascends to higher levels, as they will go a long way in determining whether he'll be a frontline rotation anchor or merely a serviceable innings eater.
While Burrows is fewer than 30 innings into his professional career, it already looks like the Tigers may have struck gold with their first-round pick in last year’s draft. There was a case to be made at the time of the draft that the 6-foot-2 righty had the highest floor of any of the prep hurlers in the class, but after posting a 1.61 ERA, 1.04 WHIP and 33 strikeouts in 28 innings in the Gulf Coast League, it is Burrows’ ceiling that will endear him to dynasty league owners this offseason. With a big fastball that is already plus and a curveball and changeup that could each be plus offerings down the road, Burrows should have no problem overpowering short-season and Low-A hitters in 2016. Several of the arms taken ahead of him in last year’s draft have similar ceilings and are less likely to stick as starters, so Burrows should be considered in leagues where 200 prospects are rostered.
More Fantasy News