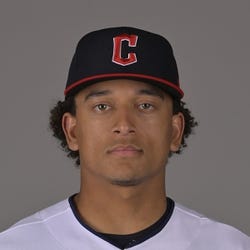 2022 Stats
AVG
.000
HR
0
RBI
0
R
0
SB
0
2023 Projections
AVG
HR
RBI
R
SB
Unlock Our Projections
2023 Fantasy Outlook
He may not slot in here on real-life lists, but there's a decent case Naylor is the game's best catching prospect for fantasy. Not only does Naylor (younger brother of Josh) have a wide open path to as much MLB playing time as he can handle in 2023, but he has the speed to eventually be a five-category catcher. Naylor, who turns 23 in February, slashed .263/.392/.496 with a 23.7 K%, 16.1 BB%, 37.8 Hard% (elite), 21 home runs and 20 steals on 24 attempts in 118 games between Double-A and Triple-A. His batting average could be a weakness as a rookie, which is the case for the vast majority of quality catching prospects. However, he could go 15/15 if he plays 100-plus games, and the only other catchers who could realistically go 15/15 are J.T. Realmuto and Daulton Varsho, the first and third options at the position per early NFBC ADP. Read Past Outlooks
read more
RANKSFrom Preseason
#

* Exit Velocity and Barrels/PA % are benchmarked against 2019 data (min 400 PA) and Hard Hit Rate is benchmarked against last season's data (min 400 PA). See here for more exit velocity/barrels stats plus an explanation of current limitations with that data set.
BB/K
0.00
BB Rate
0.0%
K Rate
62.5%
BABIP
.000
ISO
.000
AVG
.000
OBP
.000
SLG
.000
OPS
.000
wOBA
.000
Exit Velocity
93.9 mph
Hard Hit Rate
33.3%
Barrels/PA
0.0%
Expected BA
.079
Expected SLG
.118
Sprint Speed
22.2 ft/sec
Ground Ball %
0.0%
Line Drive %
33.3%
Fly Ball %
66.7%
Prospect Rankings History
Advanced Batting Stats
Loading Advanced Batting Stats...
Additional Stats
Games By Position
Defensive Stats
Loading Games Played by Position...
Loading MLB Defensive Stats...
Batted Ball Stats
Loading Batted Ball Stats...
Stats Vs Upcoming Pitchers
Want more matchup stats?
View Bo Naylor vs. Pitcher Stats
Loading Matchup Stats...
Guardians Depth Chart
Our full team depth charts are reserved for RotoWire subscribers.
Subscribe Now
Recent RotoWire Articles Featuring Bo Naylor
MLB Dynasty Rankings + 10 Rookies for 2023
12 days ago
12 days ago
James Anderson links to his fresh update to the dynasty rankings and profiles 10 rookies he is targeting for 2023, including top prospect Corbin Carroll.
2023 Fantasy Baseball Rankings - Way Too Early Top 300 Draft Ranks
46 days ago
46 days ago
James Anderson provides a way too early top 300 rankings for those who have the itch to start drafting for 2023.
The Z Files: NFBC Holdem Rankings and Strategies
56 days ago
56 days ago
Todd Zola shares his gameplan and his rankings for NFBC Postseason Holdem contests.
AL FAAB Factor: Waiver Pickups of the Week
64 days ago
64 days ago
Erik Siegrist provides a final look at available AL free agents for the 2022 season as Drew Waters looks to establish himself ahead of 2023.
The Catcher Renaissance
67 days ago
67 days ago
James Anderson details the boom in quality offensive catchers for dynasty leagues and redraft leagues and the supply and demand issues that will spawn from this catcher renaissance.
2019 Fantasy Outlook
The younger brother of Josh Naylor, Bo has similar upside as a pure hitter (Josh is a career .284 hitter in the minors), but his ability to play catcher and third base puts much less pressure on his offense. Selected out of Ontario with the No. 27 overall pick in 2018, Naylor received an over-slot $2,578,137 bonus. The Indians primarily deployed him at catcher in the AZL, but he did get five starts at third base, so it seems they want to keep their options open. Naylor is a good athlete, which should serve him well behind the dish, and he has plenty of arm for the position, but like all prep catchers, he still has a lot of work to do as a framer and game caller. While Josh was drafted in the first round in 2015 on the strength of his huge raw power, Bo is seen as a hit-over-power prospect at this stage. His above-average speed led to five steals on six attempts in just 33 games, but he may slow down by the time he reaches the majors in 2022 or 2023.
More Fantasy News