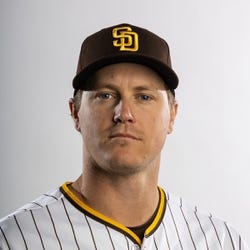 2022 Stats
AVG
.214
HR
0
RBI
1
R
1
SB
0
2023 Projections
AVG
HR
RBI
R
SB
Unlock Our Projections
2023 Fantasy Outlook
Typically, a player who mashes upper-level minor-league pitching to the tune of a .372/.442/.823 slash line, 23 homers, 74 RBI and nine steals over just 231 plate appearances would be an intriguing name in fantasy circles. That's not the case with Dixon, a journeyman who nearly retired after suffering an elbow injury early last season and who will be 31 when spring training rolls around. While the minor-league numbers were impressive, Dixon went just 3-for-14 in a brief stint with the Padres and struck out five times. He's always had trouble making contact, posting a massive 32.9% strikeout rate over 572 plate appearances across four major-league campaigns. That's unlikely to change given the large sample size and Dixon's age, and it remains to be seen if his power gains in the minors last season are legitimate. A best-case scenario would have Dixon getting fairly frequent at-bats at DH while occasionally spelling others at the corner infield/outfield spots, but he could just as easily fall off what projects to be a loaded San Diego roster. Read Past Outlooks
read more
League Majors
Bats R
Throws R
40 Man Yes
Height 6'2"
Weight 215
DOB 1/29/1992
Born San Diego, CA
College Arizona
Drafted 3rd Rd 2013 LAD
$Signed a one-year contract with the Padres in March of 2022.

* Exit Velocity and Barrels/PA % are benchmarked against 2019 data (min 400 PA) and Hard Hit Rate is benchmarked against last season's data (min 400 PA). See here for more exit velocity/barrels stats plus an explanation of current limitations with that data set.
BB/K
0.00
BB Rate
0.0%
K Rate
35.7%
BABIP
.333
ISO
.071
AVG
.214
OBP
.214
SLG
.286
OPS
.500
wOBA
.218
Exit Velocity
88.4 mph
Hard Hit Rate
11.1%
Barrels/PA
0.0%
Expected BA
.239
Expected SLG
.293
Sprint Speed
21.9 ft/sec
Ground Ball %
33.3%
Line Drive %
33.3%
Fly Ball %
33.3%
Advanced Batting Stats
Loading Advanced Batting Stats...
Additional Stats
Games By Position
Defensive Stats
Loading Games Played by Position...
Loading MLB Defensive Stats...
Batted Ball Stats
Loading Batted Ball Stats...
Stats Vs Upcoming Pitchers
Want more matchup stats?
View Brandon Dixon vs. Pitcher Stats
Loading Matchup Stats...
Padres Depth Chart
Our full team depth charts are reserved for RotoWire subscribers.
Subscribe Now
Recent RotoWire Articles Featuring Brandon Dixon See More
The Z Files: NFBC Holdem Rankings and Strategies
115 days ago
115 days ago
Todd Zola shares his gameplan and his rankings for NFBC Postseason Holdem contests.
NL FAAB Factor: Waiver Pickups of the Week
123 days ago
123 days ago
Jan Levine concludes his column for the season with a look at the remaining schedule while also offering potential stash candidates.
The Z Files: The Fallacy of Stabilization and an Early Look at Home Runs
April 10, 2021
April 10, 2021
Todd Zola offers some thoughts on early-season trends, including the home run surge led by Nick Castellanos and the Reds.
The Z Files: Winning Tendencies, Part Six
June 10, 2020
June 10, 2020
Todd Zola breaks down roster management trends from last season's NFBC Main Event and notes that Lucas Giolito became a poster boy for exercising patience.
The Z Files: The Relationship Between HR and Flyball Average Exit Velocity
January 30, 2020
January 30, 2020
Todd Zola takes a deep dive into average exit velocity on flyballs and discovers that Gio Urshela's power display last year may not have been fueled by luck after all.
Past Fantasy Outlooks
2020
2019
2018
Dixon spent the first few weeks of the 2019 season at Triple-A and saw inconsistent playing time over much of the second half of the season due to Jeimer Candelario's shift to first base, but still led the Tigers with 15 home runs. That speaks more to the dearth of talent on the Detroit roster than it does Dixon's skills. The 27-year-old had a strikeout rate of 32.4% and 0.15 K/BB, both of which would have ranked worst among major-league first basemen had he logged the plate appearances to qualify. Dixon enjoyed better fortune on balls in play, even so he was 14% worse than league average at the plate. Dixon will likely have to fight to make the Opening Day roster in 2020. Even if he does make the team, an everyday role is tough to envision given his struggles making contact, particularly against same-handed pitching.
Dixon made his big-league debut at age 26 with the Reds last year and struggled at the plate, hitting .178/.218/.356 in 124 plate appearances. It's tough enough to hit well in your first exposure to major-league pitching, and harder still when you do it as a pinch-hitter and utility player, which was Dixon's role last season. He'll likely reprise the same role with the Tigers in 2019 if he makes the team, after they claimed him off waivers in the offseason.
Dixon turned 26 this offseason and has yet to reach the majors. He is also a below-average defender, pretty much everywhere, so it's hard to see where he would fit on a big-league roster. Nonetheless, he will get his chance to earn a spot this spring after going undrafted in the Rule 5 draft this offseason. He has above-average power to the pull side and is an above-average runner, so if he were given a shot, Dixon could gain relevancy in deeper leagues. However, his top three positions are third base, first base and left field. The Reds have Eugenio Suarez and top prospect Nick Senzel at third base, Joey Votto at first base and five big-league outfielders in the fold who are better than Dixon. His upside hinges on playing time so that he can accrue counting stats, and it's hard to envision how he would get that playing time in 2018.
More Fantasy News