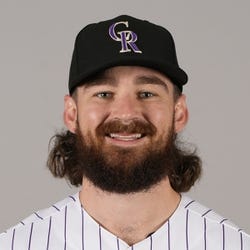 2022 Stats
AVG
.266
HR
13
RBI
63
R
72
SB
0
2023 Projections
AVG
HR
RBI
R
SB
Unlock Our Projections
2023 Fantasy Outlook
Rodgers has seemingly been on the scene forever, yet he is now entering his age 25 season. The journey here has been marred with mulitple injuries, and 2022 was his first "full" season in the big leagues but even it saw him play fewer than 140 games. His hitting profile is one much like other Colorado players: rakes at home (.317/.388/.511) while struggling mightily on the road (.239/.292/.354.) He does not have any one fantasy skill to target as you look to build your roster as he does not do anything particularly well. His ability to reach base is very much built on the volatility of his batting average which limits his run scoring while his next stolen base will be the first one of his career. For all the hype coming up in his prep days and his days in the minors, we are left wanting much more from him. Youth is still on his side, but your impatience is warranted. Read Past Outlooks
read more
RANKS
#271
ADP
#