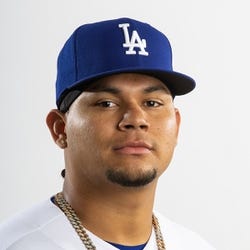 2022 Stats
W-L
2-4
ERA
3.26
WHIP
0.99
K
43
SV
4
2023 Projections
W-L
ERA
WHIP
K
SV
Unlock Our Projections
2023 Fantasy Outlook
Durability continues to be Graterol's biggest issue with two more trips to the injured list in 2022. First, a right shoulder injury sidelined him for over a month, followed by right elbow inflammation that forced Graterol to miss three more weeks in September. Despite the setbacks, the 24-year-old managed to log career-highs with 46 appearances and 49.2 innings. Graterol's strikeout (21.8%), walk (5.1%) and groundball (63.1%) rates improved and it looked like he was going to take over the Dodgers closer role before getting hurt. The right-hander added a cutter to his arsenal in 2021 and threw the pitch more last year, but his slider and 100-mph sinker continue to be his most effective weapons. Graterol has the upside of a dominant closer and figures to be in the mix for 2023 saves after tallying four last year. However, since we can't yet count on a full season from Graterol, try to temper your expectations. Read Past Outlooks
read more
RANKSFrom Preseason
#

* Exit Velocity, Barrels/BBE %, Balls Hit 95+ MPH %, and Spin Rate are benchmarked against 2019 data (min 30 IP). See here for more exit velocity/barrels stats plus an explanation of current limitations with that data set.
K/BB
4.30
K/9
7.8
BB/9
1.8
HR/9
0.5
Fastball
99.7 mph
ERA
3.26
WHIP
0.99
BABIP
.271
GB/FB
3.46
Left On Base
64.7%
Exit Velocity
80.9 mph
Barrels/BBE
2.5%
Spin Rate
2205 rpm
Balls Hit 95+ MPH
17.3%
Swinging Strike
10.9%
Prospect Rankings History
View Complete Brusdar Graterol Prospect Ranking History
Advanced Pitching Stats
Loading Advanced Pitching Stats...
Defensive Stats
Loading MLB Defensive Stats...
Stats Vs Today's Lineup
Want more matchup stats?
View Brusdar Graterol vs. Batter Stats
Loading Matchup Stats...
Dodgers Depth Chart
Our full team depth charts are reserved for RotoWire subscribers.
Subscribe Now
Recent RotoWire Articles Featuring Brusdar Graterol
Closer Encounters: 2022 Saves in Review, Part 1
52 days ago
52 days ago
Ryan Rufe recaps this past season's saves landscape. Just how many teams preferred closer committees over the conventional approach?
The Z Files: NFBC Holdem Rankings and Strategies
54 days ago
54 days ago
Todd Zola shares his gameplan and his rankings for NFBC Postseason Holdem contests.
NFBC Main Event: Fever Dream, Chapter 5
58 days ago
58 days ago
Ryan Rufe walks us through the final few weeks of his first foray into the NFBC Main Event.
MLB: Postseason Cheat Sheet and Strategy
58 days ago
58 days ago
Todd Zola tackles the MLB Postseason Cheat Sheet for RotoWire and discusses his approach to postseason leagues this year.
NL FAAB Factor: Waiver Pickups of the Week
69 days ago
69 days ago
Pitching remains Jan Levine's focus for the final week of September.
Past Fantasy Outlooks
2022
2021
2020
2019
2018
Graterol threw 523 pitches last season and nearly 32% of them - 166 to be exact - had a pitch velocity in triple digts. While his 100-mph sinker ranked in the 100th percentile for velocity, the pitch did not exactly blow opposing hitters away. It produced just a 13.9% whiff percentage and .289 BA compared to 30.9% clip and .167 BA on his slider. Graterol's modest 18.0% strikeout rate is not what you'd expect from a pitcher with this kind of heat, but he made up for his lack of strikeouts with a 58.3% groundball rate and 0.5 HR/9. The 23-year-old did spend time on the IL last season with a forearm injury that limited him to just 33.1 innings, most of which came in middle relief. He's likely ticketed for the same role in 2022 unless the Dodgers fail to sign or trade for any relievers this offseason. In that scenario, Graterol would ascend the high-leverage ladder and potentially see some save chances.
Graterol's year began with him initially being sent from Minnesota to Boston as part of the three-way trade to get Mookie Betts to Los Angeles and ended with Graterol in L.A. earning a World Series ring. Boston nixed the deal with concerns about Graterol's medicals, including shoulder issues which caused him to miss time in the 2019 minor-league season. It is easy to understand why his shoulder could be an issue moving forward as Graterol's delivery is quite stiff, yet he pushes triple-digits to home plate with regularity. That high-velocity fastball, classified as a sinker, does not have much life to it but is very tough to square up. The slider is a weapon for him because hitters cannot afford to sit slider on a guy throwing 100-plus. While the strikeouts have yet to manifest, showing he's still a work-in-progress, Graterol has the potential to close down the road.
Graterol might have had the best pure arm in the Twins' system, but that did not mean he was their best pitching prospect. Durability was once again a big issue for the bulky right-hander -- he missed time with back spasms for the second year in a row and also missed six weeks with a shoulder injury. When he returned, it was as a reliever, first at Double-A, then at Triple-A, and he finished the year in the big-league bullpen. His XXL physique (listed at 6-foot-1, 265 pounds) is likely the cause for his recurring back issues, and he has averaged under 71 innings per year since 2016 Tommy John surgery. He also lacks a reliable third pitch. The Twins traded him to the Red Sox in February as part of a three-team trade with the Dodgers. While Boston could always decided to continue developing Graterol as a starter in 2020, the bullpen does seem like the most logical long-term fit, where his 99-mph sinker and plus slider could be deadly.
The clear top pitching prospect in a system that has produced Jose Berrios and little else on the pitching side over the last decade, Graterol boasts one of the best fastballs in the minors. That pitch allows his above-average slider and fringe-average changeup to play up. His command is currently lacking, but the quality of his heater allowed him to be effectively wild in the lower levels. Graterol missed time last year with back spasms, but still tallied 102 innings after logging just 40 innings in 2017 -- Tommy John surgery erased his 2016 season. He does not have a great body (6-foot-1, roughly 200 pounds) for his age (20), so good conditioning and dietary habits will be important as he climbs the ladder, especially with back issues already on the ledger. If his secondaries and command gradually improve and he shows he can hold up over a full season, he could be a frontline starter. The floor with Graterol is a high-leverage reliever.
Graterol can reach 100 mph with his fastball and had an impressive showing at rookie ball in 2017 with 45 strikeouts in 40 innings. He missed the 2016 season after Tommy John surgery, but his body grew and he gained 60 pounds with the time off. It was mostly muscle as he gained velocity and now looks to be a high upside prospect. He'll need to show he can stay healthy, pitch more innings and maintain his good control. A strong showing at Low-A could put him on the fast track to the majors.
More Fantasy News