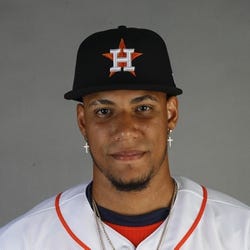 2022 Stats
W-L
4-0
ERA
1.94
WHIP
1.18
K
88
SV
2
2023 Projections
W-L
ERA
WHIP
K
SV
Unlock Our Projections
2023 Fantasy Outlook
Abreu graduated from middle relief to high leverage as an important part of the Astros' late-inning bridge to closer Ryan Pressly. The fourth-year pro tallied a career-high 60.1 innings across 55 appearances, of which 17 were multi-inning stints. Walks (3.9 BB/9) were still an issue, but Abreu's 13.1 K/9 was 7th-best among qualified relievers thanks to a devastating slider that produced 63 of his 88 strikeouts. Abreu's fastball wasn't as effective, but he added a tick-and-a-half of velocity on average (97.2 mph) and approached triple-digits during the World Series. He also generated plenty of whiffs (98th percentile) while limiting hard contact with elite barrel (95th%) and hard hit (89th) percentages. Despite the breakout season, Abreu is unlikely to see many save chances in 2023 with Rafael Montero and Hector Neris likely ahead of him in the hierarchy. He's still worth a look in deeper formats for strikeouts and ratio support. Read Past Outlooks
read more
League Majors
Bats R
Throws R
40 Man Yes
Height 6'1"
Weight 225
DOB 4/22/1997
Born Santo Domingo, DR
College None
Drafted 2013 HOU
$Signed a contract with the Astros in November of 2013.

* Exit Velocity, Barrels/BBE %, Balls Hit 95+ MPH %, and Spin Rate are benchmarked against 2019 data (min 30 IP). See here for more exit velocity/barrels stats plus an explanation of current limitations with that data set.
K/BB
3.38
K/9
13.1
BB/9
3.9
HR/9
0.3
Fastball
97.2 mph
ERA
1.94
WHIP
1.18
BABIP
.344
GB/FB
1.73
Left On Base
80.6%
Exit Velocity
80.1 mph
Barrels/BBE
1.8%
Spin Rate
2521 rpm
Balls Hit 95+ MPH
15.1%
Swinging Strike
18.0%
Prospect Rankings History
View Complete Bryan Abreu Prospect Ranking History
Advanced Pitching Stats
Loading Advanced Pitching Stats...
Defensive Stats
Loading MLB Defensive Stats...
Stats Vs Today's Lineup
Want more matchup stats?
View Bryan Abreu vs. Batter Stats
Loading Matchup Stats...
Astros Depth Chart
Our full team depth charts are reserved for RotoWire subscribers.
Subscribe Now
Recent RotoWire Articles Featuring Bryan Abreu
The Z Files: OK, I'm SOLD
Yesterday
Yesterday
Todd Zola reconsiders his stance against adding holds as a roto category, and takes a look at the impact it would have on relievers like Devin Williams.
The Z Files: NFBC Holdem Rankings and Strategies
54 days ago
54 days ago
Todd Zola shares his gameplan and his rankings for NFBC Postseason Holdem contests.
MLB: Postseason Cheat Sheet and Strategy
58 days ago
58 days ago
Todd Zola tackles the MLB Postseason Cheat Sheet for RotoWire and discusses his approach to postseason leagues this year.
Collette Calls: Scoring Tweaks
64 days ago
64 days ago
Jason Collette advocates for more experimentation with scoring setups in order to give fantasy relevance to a larger pool of pitchers.
The Z Files: Sometimes, Crime Does Pay
197 days ago
197 days ago
Todd Zola examines the league-wide stolen-base environment and identifies some speedy players who could be valuable as streaming options, including Andres Gimenez.
Past Fantasy Outlooks
2021
2020
Abreu broke summer camp with the Astros as a middle reliever, but persistent control issues limited him to four appearances before he was demoted to the alternate training site. Expected to serve in a multi-inning capacity, Abreu only logged 3.1 frames, walking seven with only three punchouts. Abreu has a live arm but can't throw strikes consistently with any of his four pitches. Small-sample disclaimers apply, but his best pitch last season was his slider which Abreu thew for strikes at only a 53% clip. He only garnered strikes at a 20% rate on his curve, 23.1% on his fastball and 38.5% with his sinker. While these would improve with more than 3.1 innings thrown, those numbers are representative of the work Abreu needs to do to become an effective major-league pitcher. Fortunately for Abreu, Houston is adept at refining repertoires to maximize efficiency.
Abreu entered 2019 having never pitched above Low-A. He ended it in the Astros' bullpen. The 22-year-old righty made seven relief appearances, allowing just one run in 8.2 innings while striking out 13 batters. Results were considerably more mixed in 91.1 innings in the minors, where he primarily worked as a starter. His 31.8 K% at those levels was promising, though it came with a 13.6 BB%. His breaking ball, which is thrown at the speed of a slider (86 mph) but has the shape of a curveball, grades out as a 70-grade pitch, making it one of the best breaking balls on the planet. He threw it 65.1% of the time in the majors. He has a mid-90s fastball, but his seldom-thrown changeup is just a show-me pitch, which coupled with his command woes, points to a future in the bullpen. Houston may continue to develop him as a starter, but whenever they pull the plug, he could be a lights-out late-inning reliever.
More Fantasy News