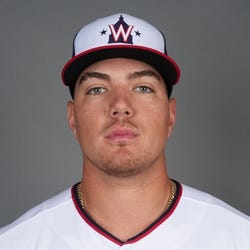 Out
Injury Shoulder
Est. Return 2/1/2023
2022 Stats
W-L
0-1
ERA
14.54
WHIP
1.85
K
6
SV
0
2023 Projections
W-L
ERA
WHIP
K
SV
Unlock Our Projections
2023 Fantasy Outlook
Cavalli has loud stuff and a clear path to a full season in the Nationals rotation. However a significant shoulder injury suffered in his first MLB start (Aug. 26) clouds his immediate future. He was able to throw pain-free from 60 feet at the end of the season, but he mentioned in an interview after landing on the injured list that he had never felt the kind of shoulder discomfort he was feeling at that time. The big 6-foot-4 righty sits at 96 mph with his fastball while showing off a plus mid-80s curveball and a changeup and slider that have the potential to be plus pitches in time. Cavalli's command and control have lagged behind, and this latest injury adds to the risk. The Nationals won't win many games in 2023 and haven't shown an ability to develop quality starting pitching, so there are factors outside Cavalli's control that lessen his appeal. However, he is still talented enough to merit consideration in most competitive leagues. Read Past Outlooks
read more
RANKSFrom Preseason
#

* Exit Velocity, Barrels/BBE %, Balls Hit 95+ MPH %, and Spin Rate are benchmarked against 2019 data (min 120 IP). See here for more exit velocity/barrels stats plus an explanation of current limitations with that data set.
K/BB
3.00
K/9
12.5
BB/9
4.2
HR/9
0.0
Fastball
95.6 mph
ERA
14.54
WHIP
1.85
BABIP
.491
GB/FB
1.50
Left On Base
12.5%
Exit Velocity
73.5 mph
Barrels/BBE
5.9%
Spin Rate
2242 rpm
Balls Hit 95+ MPH
14.7%
Swinging Strike
12.1%
Prospect Rankings History
Advanced Pitching Stats
Loading Advanced Pitching Stats...
Defensive Stats
Loading MLB Defensive Stats...
Stats Vs Today's Lineup
Want more matchup stats?
View Cade Cavalli vs. Batter Stats
Loading Matchup Stats...
Nationals Depth Chart
Our full team depth charts are reserved for RotoWire subscribers.
Subscribe Now
Recent RotoWire Articles Featuring Cade Cavalli
Mound Musings: The “Kids on Parade” Watch List for 2023
69 days ago
69 days ago
As the MLB regular season draws to its conclusion, Brad Johnson presents his Kids on Parade list, and at the top sits Grayson Rodriguez, the Orioles' star prospect.
MLB Pitching Prospect Draft For 2023
83 days ago
83 days ago
James Anderson, Eric Cross and Chris Clegg draft pitching prospects for 2023 value only, with Astros righty Hunter Brown solidifying his place near the top.
NL FAAB Factor: Waiver Pickups of the Week
101 days ago
101 days ago
Jan Levine packs this week's edition with a number of pitchers who may be set to receive more opportunities.
Weekly Pitcher Rankings: Twice Fried for Extra Crispiness
102 days ago
102 days ago
Todd Zola's weekly pitcher rankings are topped by Max Fried, who's set to face a pair of light-hitting lineups.
FanDuel MLB: Friday Targets
103 days ago
103 days ago
Chris Bennett kicks off his Friday recommendations with Yankees ace Gerrit Cole in an attractive matchup with Oakland.
Past Fantasy Outlooks
2022
2021
Cavalli made good on his billing as one of the very best pitchers in the 2020 draft, striking out 175 in 123.1 innings across stops at High-A, Double-A and Triple-A. The 13.2 BB% he logged at Double-A and Triple-A is the primary blemish on his pro debut, and improving his command and control will be the key to him reaching his ceiling as a frontline starter. He has a mid-90s fourseam fastball that touched triple digits last year and a bevy of quality secondary offerings. His slider is currently his best offspeed pitch, but his curveball and changeup show promise, giving him a complete repertoire. Getting up over 120 innings was a big accomplishment for the 6-foot-4, 226-pound righty, as he'd dealt with some injuries in college. Cavalli will head back to Triple-A with the goal of walking fewer batters, but he should spend a good chunk of the season in the big leagues if he stays healthy. Few pitching prospects can match his fantasy upside.
At 6-foot-4, 226 pounds, the right-handed Cavalli has a prototypical starter's frame with the stuff to match. A former two-way player at Oklahoma, he focused on pitching as a sophomore and his stock took off, with the Nationals popping him with the No. 22 pick in the 2020 draft. He sits in the mid-90s with his fastball and can touch 98 mph. Cavalli also has a plus slider, while his changeup and curveball project as above-average offerings. Back and arm injuries have held him back in prior seasons, and despite a clean, effortless delivery, throwing strikes has been an issue at times, although he only walked five while striking out 37 in 23.2 innings last spring. It would not be surprising if Cavalli ended up being the best pitcher from this historically good class of college arms, but he is also quite risky. He threw over 50 innings after getting drafted and could head to High-A this year.
More Fantasy News