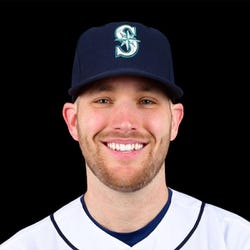 Calculate Stats Over Time
Just click on any two dates.
Loading Minor League Pitching Game Log...
Left/Right Pitching Splits
Since 2020
-16%
BAA vs LHP
2022
No Stats
2021
-26%
BAA vs LHP
2020
-22%
BAA vs LHP
Home/Away Pitching Splits
Since 2020
-33%
ERA on Road
2022
No Stats
2021
-31%
ERA on Road
2020
-49%
ERA on Road
Advanced Pitching Stats
Loading Advanced Pitching Stats...
Defensive Stats
Loading MLB Defensive Stats...
Stats Vs Today's Lineup
Want more matchup stats?
View Casey Sadler vs. Batter Stats
Loading Matchup Stats...
Mariners Depth Chart
Our full team depth charts are reserved for RotoWire subscribers.
Subscribe Now
Recent RotoWire Articles Featuring Casey Sadler See More
Closer Encounters: Kimbrel to the Dodgers
306 days ago
306 days ago
Ryan Rufe analyzes the Craig Kimbrel trade to the Dodgers and other happenings in bullpens around baseball.
Dream11 Fantasy Baseball: Mariners at Giants
September 8, 2020
September 8, 2020
Juan Pablo Aravena breaks down Tuesday's Mariners at Giants game for Dream11 contests.
Past Fantasy Outlooks
2022
2021
2020
2016
2015
2014
Sadler had perhaps one of the most underappreciated performances of the 2021 season, as he maintained a 0.67 ERA and 0.72 WHIP across 40.1 innings pitching out of the Mariners bullpen. Unfortunately, but as could be expected, it will be extremely difficult for him to replicate those efforts. While always proficient at limiting home runs, Sadler allowed only 0.2 HR/9 in 2021. Other areas that are likely to regress moving forward include a .188 BABIP and 91 LOB%. That isn't to say Sadler was solely the beneficiary of good luck. He greatly increased the usage of his cutter, which limited opposing hitters to a .225 xBA, .327 xSLG and .274 xWOBA and also rediscovered his control (6.9 BB%). Sadler appeared to be in line to compete for a setup role in Seattle's bullpen in 2022, but he'll have to wait another year before attempting to follow up his strong 2021 campaign since he underwent season-ending shoulder surgery in March.
This player will receive an outlook for the 2021 fantasy baseball season.
Sadler underwent Tommy John surgery in 2015 and made only two major-league appearances in the three seasons that followed. He got his first true chance in the big leagues last season, hurling 46.1 innings between the Rays and Dodgers. The right-hander throws a fairly even split of sinkers, cutters and curveballs, generating excellent spin on all three pitches. However, despite the elevated spin rates, Sadler fails to miss many bats as evidenced by his paltry 16.0 K% last season. The low strikeout rate paired with a lofty 86.3 LOB% largely explains the discrepancy between Sadler's ERA (2.14) and FIP (4.38) and suggests that some ERA regression may lie ahead despite his above-average command and control (6.7 BB%). Sadler doesn't figure to be in the mix for saves or holds with only a partial season of limited success under his belt; as such, he should be ignored in most fantasy drafts.
Sadler underwent Tommy John Surgery in October and will miss the entire 2016 season. The 25-year-old won his lone start for Pittsburgh in 2015 but spent the majority of time in Triple-A, where he went 6-5 with a 4.22 ERA and 1.20 WHIP. Sadler was looked upon as a possible depth starter but the injury sets him back. Fantasy owners will need to look elsewhere in 2016.
Sadler pitched well as a starter for Triple-A Indianapolis in 2014, but was unable to leverage that success into much at the big-league level. The right-hander compiled an 11-4 record with a 3.03 ERA and 1.19 WHIP in 124.2 frames for Indy. He had a tough time getting anyone out in the majors, allowing 12 hits, five walks and nine earned runs in 10.1 innings. Sadler is more of a possible swingman, making the occasional spot start while being used primarily out of the bullpen. While he is unlikely to get a crack at Pittsburgh's rotation in April, Sadler could make a midseason appearance when injuries strike.
Pittsburgh added Sadler to its 40-man roster in November, showing that the organization may have plans for the 23-year-old righty. He registered a 3.31 ERA in 130.1 innings for Double-A Altoona in 2013, but his 67:42 K:BB ratio did little to excite fantasy owners. The Pirates changed Sadler from reliever to starter in the middle of the 2012 season, so there's reason to expect continued gains from him. The 6-foot-4, 190-pound hurler uses a pitch-to-contact, groundball style to retire hitters, something that dovetails nicely with the organization's defensive shifting strategy. From a fantasy perspective, Sadler's peripherals leave little for fantasy owners to get excited about.
More Fantasy News