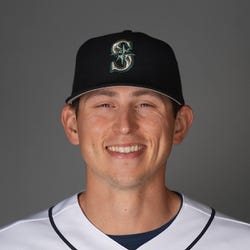 * Exit Velocity, Barrels/BBE %, Balls Hit 95+ MPH %, and Spin Rate are benchmarked against 2019 data (min 120 IP). See here for more exit velocity/barrels stats plus an explanation of current limitations with that data set.
K/BB
1.86
K/9
6.2
BB/9
3.3
HR/9
1.1
Fastball
91.7 mph
ERA
3.73
WHIP
1.33
BABIP
.282
GB/FB
0.82
Left On Base
76.6%
Exit Velocity
82.4 mph
Barrels/BBE
6.1%
Spin Rate
2154 rpm
Balls Hit 95+ MPH
26.0%
Swinging Strike
10.0%
Advanced Pitching Stats
Loading Advanced Pitching Stats...
Defensive Stats
Loading MLB Defensive Stats...
Stats Vs Today's Lineup
Want more matchup stats?
View Chris Flexen vs. Batter Stats
Loading Matchup Stats...
Mariners Depth Chart
Our full team depth charts are reserved for RotoWire subscribers.
Subscribe Now
Recent RotoWire Articles Featuring Chris Flexen
The Z Files: OK, I'm SOLD
Yesterday
Yesterday
Todd Zola reconsiders his stance against adding holds as a roto category, and takes a look at the impact it would have on relievers like Devin Williams.
The Z Files: NFBC Holdem Rankings and Strategies
54 days ago
54 days ago
Todd Zola shares his gameplan and his rankings for NFBC Postseason Holdem contests.
MLB: Postseason Cheat Sheet and Strategy
58 days ago
58 days ago
Todd Zola tackles the MLB Postseason Cheat Sheet for RotoWire and discusses his approach to postseason leagues this year.
Weekly Pitcher Rankings: Decisions, Decisions
63 days ago
63 days ago
Todd Zola ranks starting pitchers ahead of a short week in which workloads are full of uncertainty.
Collette Calls: Scoring Tweaks
64 days ago
64 days ago
Jason Collette advocates for more experimentation with scoring setups in order to give fantasy relevance to a larger pool of pitchers.
Past Fantasy Outlooks
2022
2021
After struggling as a starter in the Mets organization, Flexen pitched for the Doosan Bears in the KBO where he sported a 3.01 ERA and 1.09 WHIP. He returned stateside last season, settling in the Pacific Northwest. Flexen unveiled a new pitch mix with Seattle, ditching his slider and sinker for a cutter and more curves. While his 3.61 ERA suggests the adjustments worked, the various xERAs were around a run higher. Even so, that's an improvement over Flexen's stint with the Mets. His strength was a 5.6 BB% and keeping the ball in the yard. It's the latter fueling the higher ERA estimators as his xHR is a few knocks over the 19 he allowed. Trusting a hurler with a 16.9 K% is precarious, but Flexen is a viable streamer, best utilized at home in power-suppressing T-Mobile Park and favorable road matchups.
Flexen struggled over his first three years in the majors from 2017 to 2019, so he headed to Korea to right the ship in 2020. The right-hander pitched well in the KBO, starting 21 games while posting a 3.01 ERA during that time with an impressive 2.74 FIP. He jumped to a 28.0 K% last season, and he'll now attempt to translate his production to major-league success. Flexen worked as a reliever during his first three years in the majors, issuing more walks (54) than strikeouts (49) over that span while posting a 31.9 GB% and 42.6% hard-hit rate in 2019. However, he should compete for a spot in the back end of Seattle's rotation given his success as a starter last year. He improved his command and posted a 132:30 K:BB over 116.2 innings and lasted at least five innings in 17 of his 21 starts. Flexen doesn't have a strong MLB resume, but his KBO success makes him a potential late-round option in deeper leagues.
More Fantasy News