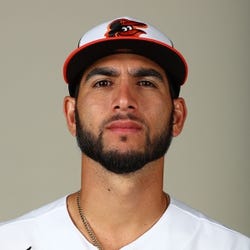 * Exit Velocity, Barrels/BBE %, Balls Hit 95+ MPH %, and Spin Rate are benchmarked against 2019 data (min 30 IP). See here for more exit velocity/barrels stats plus an explanation of current limitations with that data set.
K/BB
2.62
K/9
8.6
BB/9
3.3
HR/9
0.3
Fastball
96.9 mph
ERA
1.40
WHIP
1.16
BABIP
.290
GB/FB
2.22
Left On Base
87.2%
Exit Velocity
81.8 mph
Barrels/BBE
4.0%
Spin Rate
2372 rpm
Balls Hit 95+ MPH
26.9%
Swinging Strike
11.8%
Prospect Rankings History
View Complete Cionel Perez Prospect Ranking History
Advanced Pitching Stats
Loading Advanced Pitching Stats...
Defensive Stats
Loading MLB Defensive Stats...
Stats Vs Today's Lineup
Want more matchup stats?
View Cionel Perez vs. Batter Stats
Loading Matchup Stats...
Orioles Depth Chart
Our full team depth charts are reserved for RotoWire subscribers.
Subscribe Now
Recent RotoWire Articles Featuring Cionel Perez
The Z Files: OK, I'm SOLD
Yesterday
Yesterday
Todd Zola reconsiders his stance against adding holds as a roto category, and takes a look at the impact it would have on relievers like Devin Williams.
Collette Calls: Scoring Tweaks
64 days ago
64 days ago
Jason Collette advocates for more experimentation with scoring setups in order to give fantasy relevance to a larger pool of pitchers.
Collette Calls: The Homestretch
117 days ago
117 days ago
Jason Collette examines everything that's possible down the stretch by taking a look at some of the best stretch runs of the past few seasons.
AL FAAB Factor: Waiver Pickups of the Week
118 days ago
118 days ago
Erik Siegrist checks out the post-trade deadline free agent pool as Baltimore's Felix Bautista is just one of a few new potential closers in the American League.
Closer Encounters: Trade Deadline Upheaval
120 days ago
120 days ago
The trade deadline has left closer situations in flux around the league, but Ryan Rufe is here to break it all down.
Past Fantasy Outlooks
2019
2017
Perez is an undersized (5-foot-11) southpaw with significant pedigree who fits best as a high-leverage reliever capable of getting more than three outs. He is technically competing for a spot in the starting rotation this spring, but is more of a depth option in that competition. Signed out of Cuba for $5.15 million in 2016, Perez boasts a 70-grade mid-90s fastball that is a swing-and-miss pitch in any count. His above-average breaking ball plays nicely off the heater, but he lacks a true third pitch. This would not preclude him from going three or four innings as a starter in a piggyback game -- the Astros have been utilizing this strategy in the minors, allowing multiple pitchers to throw around four innings rather than asking one pitcher to turn a lineup over more than twice. However, Perez would generate the most fantasy value as a Josh Hader type of reliever who picks up wins and the occassional save. Perez is more of a ratio risk than Hader, and he lacks that type of strikeout upside, so he has minimal fantasy value at this point in most formats.
The Cuban defector signed a deal in September with the Astros that included a $5.15 million signing bonus. However, the deal was voided in October due to an unspecified medical issue. He later signed with the Astros again for $2 million. If he can overcome the medical concern, Perez may quickly become the top left-handed pitching prospect in the Astros organization. He features a mid-to-low-90s fastball, a breaking ball with above average potential and a changeup that he is still working on developing, as he didn't use it much in Cuba. Perez's last season in Cuba was impressive, as he posted a 2.06 ERA and 76 strikeouts over 17 starts. Given his incomplete repertoire and slight stature (5-foot-11, 170 pounds), Perez carries plenty of bullpen risk. Without frontline upside or any stateside success, he can be simply monitored in most dynasty leagues for now.
More Fantasy News