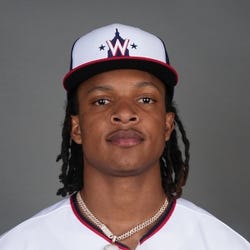 2022 Stats
AVG
.246
HR
2
RBI
21
R
33
SB
7
2023 Projections
AVG
HR
RBI
R
SB
Unlock Our Projections
2023 Fantasy Outlook
Abrams, the No. 6 overall pick in 2019, was traded from San Diego to Washington in the blockbuster Juan Soto deal. His numbers down the stretch with the Nationals were mostly underwhelming, although he stole six bases in 44 games following the trade, showcasing the speed that made him a top prospect in both real-life and fantasy circles. At 22 years old, Abrams is still mostly projection with the bat. He showed that there is some thump in there during his time at Triple-A El Paso last season, smacking seven homers with a .507 SLG in 30 games with the affiliate, but he didn't look particularly close to putting it together at the big-league level. The Nationals will be patient with Abrams as they embrace a long-term rebuild. Can he hit enough at this stage to allow the speed to play? Read Past Outlooks
read more
RANKS
#235
ADP
#

* Exit Velocity and Barrels/PA % are benchmarked against 2019 data (min 400 PA) and Hard Hit Rate is benchmarked against last season's data (min 400 PA). See here for more exit velocity/barrels stats plus an explanation of current limitations with that data set.
BB/K
0.10
BB Rate
1.7%
K Rate
16.6%
BABIP
.291
ISO
.077
AVG
.246
OBP
.280
SLG
.324
OPS
.604
wOBA
.269
Exit Velocity
86.5 mph
Hard Hit Rate
24.5%
Barrels/PA
1.7%
Expected BA
.241
Expected SLG
.316
Sprint Speed
25.1 ft/sec
Ground Ball %
50.9%
Line Drive %
17.7%
Fly Ball %
31.5%
Prospect Rankings History
View Complete CJ Abrams Prospect Ranking History
Advanced Batting Stats
Loading Advanced Batting Stats...
Additional Stats
Games By Position
Defensive Stats
Loading Games Played by Position...
Loading MLB Defensive Stats...
Batted Ball Stats
Loading Batted Ball Stats...
Stats Vs Upcoming Pitchers
Want more matchup stats?
View CJ Abrams vs. Pitcher Stats
Loading Matchup Stats...
Nationals Depth Chart
Our full team depth charts are reserved for RotoWire subscribers.
Subscribe Now
Past Fantasy Outlooks
2022
2021
2020
Abrams, one of the fastest players in the minors, was performing as expected at Double-A before suffering a fractured left tibia and a sprained MCL in early July. Any kind of prospect ranking method that incorporates hard-hit data is going to be much lower on Abrams, as he had a 15.7 Hard% in 183 PA before suffering the season-ending injury. However, he was one of the youngest players at Double-A and was still 12% better than league average. He is a career .343 hitter in the minors with a 14.4 K%, so his hit tool is way ahead of his power. His 80-grade speed has led to 28 steals in 76 games, and if he reaches his ceiling, Abrams has a chance to be a similar fantasy producer to Trea Turner. That upside is extremely alluring, but there is no denying the fact that he needs to make significant strides as a power hitter to be more than a slappy leadoff type. He has been gradually adding muscle to his 6-foot-2 frame, and this will be a big year for the 21-year-old speedster to show he is still heading in the right direction. With a strong start to the year, he could be in position to be the No. 1 prospect for fantasy following some graduations this summer. Expecting him to reach San Diego in 2022 is probably unrealistic, but shortstop, center field and second base are all potential landing spots in 2023.
In a normal year, Abrams would have spent the bulk of his age-19 season at High-A, but instead he spent the summer at the alternate training site. His top areas of improvement were his defense at shortstop, thanks to lots of hands-on work with the organization's best infield instructors, and added strength that has upped his long-term power potential. He still has a lean, 6-foot-2 frame reminiscent of Byron Buxton, but his forearms and biceps are stronger. Given that frame, it's difficult to envision him slowing down anytime soon, so 30-steal potential should be there for the foreseeable future. With burgeoning power, game-changing speed and a career .393 AVG and 14:11 K:BB in 34 pro games, there's really no cap on Abrams' fantasy upside. He probably won't debut at his natural position, but he is a special enough talent that the Padres should find a spot for him when he is ready, likely in early 2022.
The same six hitters were at the top of most team's draft boards in June, and while Abrams was the last of the six to get drafted (sixth overall), he had the most impressive statistical debut. An athletic prep shortstop with plus-plus speed, Abrams' bat-to-ball ability was on full display in the AZL. He logged a 9.0 K% and had as many steals (14) as strikeouts in 32 games. Abrams won the AZL's batting title and MVP award and his 189 wRC+ was the league's second-best mark. His hit tool and speed were as advertised, but he exceeded expectations in the power department (.261 ISO) and should grow into more thump as he fills out his 6-foot-2, 185-pound frame. The plan was for him to spend the final month at Low-A, but a shoulder injury cut his season short just days after receiving that promotion. Some evaluators think he will eventually move to center field, but there are no real fantasy-relevant concerns.
More Fantasy News