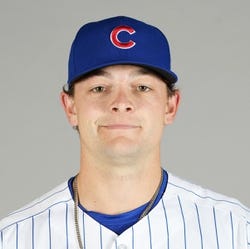 Calculate Stats Over Time
Just click on any two dates.
Loading Minor League Pitching Game Log...
Left/Right Pitching Splits
Since 2020
-13%
BAA vs RHP
2022
No Stats
2021
-24%
BAA vs RHP
2020
-20%
BAA vs LHP
Home/Away Pitching Splits
Since 2020
-45%
ERA on Road
2022
No Stats
2021
-60%
ERA on Road
2020
-100%
ERA at Home
Advanced Pitching Stats
Loading Advanced Pitching Stats...
Defensive Stats
Loading MLB Defensive Stats...
Stats Vs Today's Lineup
Want more matchup stats?
View Codi Heuer vs. Batter Stats
Loading Matchup Stats...
Cubs Depth Chart
Our full team depth charts are reserved for RotoWire subscribers.
Subscribe Now
Recent RotoWire Articles Featuring Codi Heuer See More
Collette Calls: Pitching Bold Predictions Reviews
99 days ago
99 days ago
Jason Collette analyzes what he got right and what he got wrong with his preseason pitching predictions, including an outstanding season from Dylan Cease.
Closer Encounters: 2022 Closer Rankings 2.0
311 days ago
311 days ago
Ryan Rufe updates his closer rankings as fantasy drafts hit the home stretch. How much does the needle move on Blake Treinen?
Collette Calls: Endgame Favorites
319 days ago
319 days ago
Jason Collette turns his focus to the endgame of fantasy baseball drafts. Is Mitch Keller worth another look in Pittsburgh in 2022? What should we prioritize in the reserve rounds?
TGFBI Draft Recap
325 days ago
325 days ago
Erik Siegrist breaks down how he assembled his TGFBI roster, and he's expecting big things this season from Jazz Chisholm.
LABR Mixed League Draft Review
337 days ago
337 days ago
Jeff Erickson selected Kyle Tucker in the first round of Tuesday's LABR Mixed League draft. Read his recap of the draft here.
Past Fantasy Outlooks
2022
2021
After making his major-league debut during the shortened 2020 campaign, Heuer used the 2021 season to prove he has a promising future as a high-leverage reliever. In 91 career innings, he's limited opposing hitters to 0.8 HR/9 and has also posted a respectable 8.6 BB%. Though his 19.9 K% across 67.1 innings was disappointing on the surface, his 13.5 percent swinging-strike rate suggests that he has plenty of strikeout upside beyond what he displayed in 2021. After being dealt to the Cubs at the trade deadline in exchange for Craig Kimbrel, Heuer earned a pair of saves, potentially auditioning for the closer role in 2022. Though he may not begin the season seeing the majority of save chances in Chicago, Heuer is a strong reliever to speculate on in the later rounds.
Heuer was one of several young White Sox relievers to shine in 2020, posting a sterling 1.52 ERA and 0.89 WHIP across 23.2 innings. He yielded three earned runs across his first five appearances before settling into a groove the remainder of the campaign, finishing the regular season by allowing just one earned run over his final 17.1 frames. The right-hander averaged nearly 98 mph on his fastball as a rookie, helping him boast a solid 27.2 K% and 14.4 SwStr%. The stuff is that of a closer, and Heuer proved capable of handling the stress of high-leverage situations, notching six holds and one save. There was some thought that Heuer could step into a ninth-inning role with the anticipated departure of Alex Colome, but that possibility went out the window when Liam Hendriks was brought aboard. Instead, Heuer should feature as a key setup man in one of the American League's top bullpens.
More Fantasy News