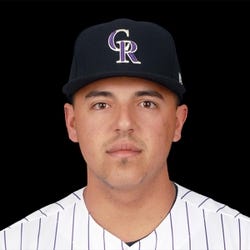 Calculate Stats Over Time
Just click on any two dates.
Loading Minor League Batting Game Log...
Left/Right Batting Splits
Since 2020
+84%
OPS vs RHP
2022
No Stats
2021
+84%
OPS vs RHP
2020
No Stats
Home/Away Batting Splits
Since 2020
+59%
OPS at Home
2022
No Stats
2021
+59%
OPS at Home
2020
No Stats
Prospect Rankings History
Advanced Batting Stats
Loading Advanced Batting Stats...
Additional Stats
Games By Position
Defensive Stats
Loading Games Played by Position...
Loading MLB Defensive Stats...
Batted Ball Stats
Loading Batted Ball Stats...
Stats Vs Upcoming Pitchers
Want more matchup stats?
View Colton Welker vs. Pitcher Stats
Loading Matchup Stats...
Giants Depth Chart
Our full team depth charts are reserved for RotoWire subscribers.
Subscribe Now
Recent RotoWire Articles Featuring Colton Welker See More
Rookie Hitter Tiers 1.0
9 days ago
9 days ago
James Anderson releases Vol. 1 of his rookie hitter tiers for 2023 value only, in which Orioles infielder Gunnar Henderson is in a tier of two at the top.
Past Fantasy Outlooks
2021
2020
2019
2018
2017
Welker was added to the Rockies' 40-man roster in November of 2020. He spent the summer under the team's watchful eye at the alternate site as part of Colorado's 60-man pool. Welker absolutely crushed at the lower levels of the minors and was above league average by wRC+ at Double-A in 2019. His strikeout rate against Double-A arms was just 17.3% at age 21 and Welker reached double-digit homers while maintaining a walk rate right around 8% even with the jump in competition. Welker has also shown a splash of speed, stealing seven bases in nine attempts from 2018-19. Most of his time has been spent at third base, but Welker can also play first, and now that he's on the 40-man, Welker looks primed to debut in 2021. The appeal here in dynasty is the future ballpark, which will in theory prop up a respectable-but-modest skill set (by MLB standards).
After spending 2018 with High-A Lancaster, one of the best hitting environments in the minors, Welker was promoted to Double-A Hartford where he toiled last season. His numbers with the Yard Goats are more representative of his true skill level. As expected, his rate stats dipped though his contact rate improved while maintaining the gains made in patience the previous season. Further, Welker's .252/.313/.408 came as a 21-year old, younger than most of his competition at the level. A high school shortstop drafted to be a third baseman, Welker's lateral agility has declined to the point that he is a below-average defender at the hot corner, and the Rockies already have roughly a half dozen similarly skilled offensive-minded first basemen in the organization. It's unclear where Welker will begin the 2020 season, but keep in mind his numbers will inflate when he is advanced to Triple-A Colorado Springs.
When a hitting prospect plays half his games at Lancaster, arguably the most hitter-friendly park in the minors, it is best to just examine his road performance. Welker hit .289/.345/.404 with four home runs and a 55:21 K:BB in 225 road at-bats (he hit .379/.419/.572 at home). He uses the whole field, has always struck out at a manageable clip and could very well end up with a 60-grade hit tool. As he matures, he could also develop above-average power without selling out for it. Welker makes the plays he gets to at third base, but his lateral quickness and range leave a lot to be desired. If he eventually gets to call Coors Field home and his defense is good enough to earn him everyday at-bats, Welker could contend for batting titles. Nolan Arenado will be a free agent after the 2019 season, and his return or departure will affect Welker's dynasty-league value as much as anything he does on the field this season. A trade would obviously be a big blow.
While he flies under the national radar as a bat-first third baseman who has yet to fully tap into his plus raw power, Welker's uncommon bat-to-ball skills make him a legitimate foundational piece in dynasty leagues. He missed 10 weeks in the middle of the season with a groin injury, but was the Sally League's best hitter (158 wRC+) when healthy. Welker spits on good pitches, striking out just 15.1 percent of the time. He took advantage of the favorable hitting conditions at Asheville -- a time-honored tradition among Rockies hitting prospects -- but still hit .302 on the road as a 19-year-old at Low-A, confirming that his hit tool is among the best in the minors. While he is primarily a line-drive hitter, his youth, contact skills and plus bat speed suggest he will eventually grow into 20-plus homer power, although his ability to hit for a very high average will always be his calling card. The only concern is that his middling defense could force him off third base, but he is working diligently on that aspect of his game.
Welker is the type of bat-first prep prospect who can be snatched up for a great value in dynasty league drafts this spring, fitting a similar mold as Bobby Bradley and Austin Riley in recent years. He did not come off the board until pick 110, but it was an over-slot deal, and if there was a consensus that he would bring value with his glove, he would have gone much higher. A corner infielder who will hope to be average at third and could end up moving to first, Welker is unlikely to appear on real-life prospect lists anytime soon, but he has the makings of a middle-of-the-order hitter with a plus hit tool and plus power. His hit tool probably needs to get to at least above average to carry the rest of his profile to an everyday role, given the defensive limitations. Every hitter who has not yet played in a full-season league carries a lot of risk, but Welker makes for a worthwhile gamble given his future home ballpark, contact skills and prodigious power.
More Fantasy News