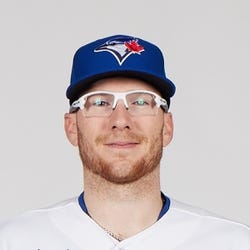 2022 Stats
AVG
.260
HR
15
RBI
44
R
34
SB
1
2023 Projections
AVG
HR
RBI
R
SB
Unlock Our Projections
2023 Fantasy Outlook
Jansen had two month-long stints on the injured list during 2022 due to an oblique strain and a broken finger, and he finished the regular season having played in 72 games. He started behind the plate Opening Day but didn't appear to have much job security with Alejandro Kirk and Gabriel Moreno also in the mix for playing time, but Jansen produced an .855 OPS with 15 home runs and 44 RBI, and he also improved his strikeout rate nearly four percentage points. He now has a .253 ISO over the past two years, which covers a stretch of 142 contests. Kirk also delivered a strong offensive campaign with a .285/.372/.415 slash line in 139 contests while splitting time between catcher and designated hitter. Jansen's availability is somewhat of a question mark since he's missed significant time each of the past two seasons, but when available he's hit with power. The Blue Jays have a plethora of strong options to stick behind the plate, so Jansen is likely to again be stuck in a timeshare in 2023, though that role could provide a better path to staying healthy. Read Past Outlooks
read more
RANKS
#

* Exit Velocity and Barrels/PA % are benchmarked against 2019 data (min 400 PA) and Hard Hit Rate is benchmarked against last season's data (min 400 PA). See here for more exit velocity/barrels stats plus an explanation of current limitations with that data set.
BB/K
0.57
BB Rate
10.1%
K Rate
17.7%
BABIP
.255
ISO
.256
AVG
.260
OBP
.339
SLG
.516
OPS
.855
wOBA
.366
Exit Velocity
90.4 mph
Hard Hit Rate
42.0%
Barrels/PA
9.3%
Expected BA
.264
Expected SLG
.514
Sprint Speed
22.4 ft/sec
Ground Ball %
33.5%
Line Drive %
15.9%
Fly Ball %
50.6%
Prospect Rankings History
View Complete Danny Jansen Prospect Ranking History
Advanced Batting Stats
Loading Advanced Batting Stats...
Additional Stats
Games By Position
Defensive Stats
Loading Games Played by Position...
Loading MLB Defensive Stats...
Batted Ball Stats
Loading Batted Ball Stats...
Stats Vs Upcoming Pitchers
Want more matchup stats?
View Danny Jansen vs. Pitcher Stats
Loading Matchup Stats...
Blue Jays Depth Chart
Our full team depth charts are reserved for RotoWire subscribers.
Subscribe Now
Recent RotoWire Articles Featuring Danny Jansen
MLB Dynasty Rankings + 10 Rookies for 2023
16 days ago
16 days ago
James Anderson links to his fresh update to the dynasty rankings and profiles 10 rookies he is targeting for 2023, including top prospect Corbin Carroll.
2023 Fantasy Baseball Rankings - Way Too Early Top 300 Draft Ranks
50 days ago
50 days ago
James Anderson provides a way too early top 300 rankings for those who have the itch to start drafting for 2023.
Past Fantasy Outlooks
2022
2021
2020
2019
It seemed like the Jays were destined to make a move at catcher, as Jansen, Alejandro Kirk and prospect Gabriel Moreno all seemed like candidates for playing time in 2022. However, Kirk may be a designated hitter, at least early in the year and Moreno won't be rushed to the majors, so Jansen still retains value even in a crowded situation. He hit .316/.373/.750 with eight home runs in 83 plate appearances from July on after missing time with an injury. Jansen's glove is good enough to keep him in the lineup over half the time, but if the improved offensive output from the end of last season carries over, he could be an excellent fantasy value, especially in two-catcher leagues.
Jansen is entering his fourth season at the big-league level, but has yet to approach 700 career PA. Sample size studies will tell you that past performance does not guarantee future results, and that is a good thing for Jansen because he has done little outside of a hot September 2019. The 2020 season saw him become more accepting of his walks, and somehow hit three of his eight homers off Tyler Glasnow (two in the Wild Card Game) but otherwise did little else at the plate. He mostly hunts for fastballs, which really leaves him susceptible to anything offspeed (.094 career batting average). The expected stats do not make us excited about a 2021 breakout from the young catcher, but the Jays can afford to give him time while the rest of their young studs carry the load. You can roster him as an endgame second catcher to see if the next few hundred plate appearances are better than the first 700.
Jansen entered last season with fewer than 100 MLB plate appearances to his name, but the sterling plate skills and improving pop he showed as a prospect made him an appealing fantasy target amid the barren catcher landscape. The juiced ball ultimately made many catchers more useful than expected, but Jansen wasn't one of them. In fact, he was actively harmful in fantasy. His .207 average placed him 29th among the 30 backstops with 300-plus plate appearances, and his 13 homers weren't special in the 2019 context. The disappointing numbers will drop Jansen's draft-day price, but he shouldn't be dismissed yet. His 81.3 percent contact rate and 42.4 hard-hit rate ranked highly among catchers and offer hope that he'll push his average to a more palatable level with some likely BABIP improvement. Additionally, a Jays lineup overflowing with young talent should lift Jansen's RBI and run ceilings compared to 2019.
A plus contributor at the desolate catcher position is a pipe dream for many. Jansen was a net positive during his time with Toronto in 2018, making him a popular late-round target this draft season. He smacked three homers, giving him 15 total across two levels, and posted a 115 wRC+, which if you lower the threshold to just 50 plate appearances, made Jansen a top-10 rate contributor at the position. Jansen also displayed quality plate skills with a manageable 17.9 K% and 9.5 BB%. The problem is that when he's everyone's favorite cheap catcher, eventually he will no longer be cheap. Drafters, especially those in two-catcher leagues, will continue to push him higher and higher as we get closer to Opening Day. It's possible Jansen will be worth it even after some helium, as he's firmly atop the depth chart with Russell Martin traded to Los Angeles. Just be sure to have some other names at the ready in case you get sniped.
More Fantasy News