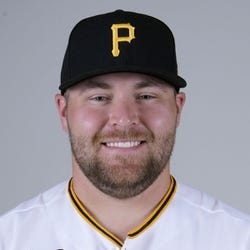 2022 Stats
W-L
3-4
ERA
2.61
WHIP
1.12
K
69
SV
19
2023 Projections
W-L
ERA
WHIP
K
SV
Unlock Our Projections
2023 Fantasy Outlook
When healthy, Bednar is one of the most secure closers in the league, as he has no competition for the role in Pittsburgh. However, just how long will he be pitching for the Pirates? With Bednar's arbitration window approaching, beginning in 2024, it will be interesting to see whether the rebuilding and typically cost-conscious team elects to trade the 28-year-old, or builds their bullpen around him. Bednar got off to a phenomenal start in 2022 and was one of the most dominant relievers in the league for two-and-half months. He mixed his 3 pitches successfully, with each producing a 30% whiff rate or higher. Bednar complements his 96.5 mph fastball with an excellent curve and a split-finger change that he threw primarily against left-handed hitters. Unfortunately, Bednar dealt with back issues for much of 2022, which eventually required an IL stint for nearly two months. As such, there's some risk in drafting him, especially since closing is no guarantee if he gets traded. Read Past Outlooks
read more
RANKSFrom Preseason
#

* Exit Velocity, Barrels/BBE %, Balls Hit 95+ MPH %, and Spin Rate are benchmarked against 2019 data (min 30 IP). See here for more exit velocity/barrels stats plus an explanation of current limitations with that data set.
K/BB
4.31
K/9
12.0
BB/9
2.8
HR/9
0.7
Fastball
96.5 mph
ERA
2.61
WHIP
1.12
BABIP
.331
GB/FB
0.98
Left On Base
74.4%
Exit Velocity
83.8 mph
Barrels/BBE
3.8%
Spin Rate
2174 rpm
Balls Hit 95+ MPH
24.5%
Swinging Strike
15.7%
Prospect Rankings History
View Complete David Bednar Prospect Ranking History
Advanced Pitching Stats
Loading Advanced Pitching Stats...
Defensive Stats
Loading MLB Defensive Stats...
Stats Vs Today's Lineup
Want more matchup stats?
View David Bednar vs. Batter Stats
Loading Matchup Stats...
Pirates Depth Chart
Our full team depth charts are reserved for RotoWire subscribers.
Subscribe Now
Recent RotoWire Articles Featuring David Bednar
The Z Files: OK, I'm SOLD
Yesterday
Yesterday
Todd Zola reconsiders his stance against adding holds as a roto category, and takes a look at the impact it would have on relievers like Devin Williams.
Past Fantasy Outlooks
2022
2021
Bednar's rookie season was stellar overall, but he really flashed his upside after the All-Star break, posting a miniscule 1.05 ERA, 0.78 WHIP and 35:7 K:BB over 25.2 innings. After allowing five home runs over the first two-and-a-half months of the season, the Pittsburgh native did not permit another long ball after June 16, a span of 35.2 innings. Armed with a 97-mph fastball, devastating curve and changeup - all of which held batters to a .204 average or below - Bednar impressed with a 16.9% SwStr% (T6th among qualified relievers), 32.5% strikeout rate (94th percentile) and 24.5% K-BB% (16th among qualified relievers). The 27-year-old finished the season with a 2.23 ERA, 0.97 WHIP, three wins, three saves and 13 holds over 61 appearances. Bednar should receive a good share of the Pirates' save opportunities, but will likely be deployed in the highest-leverage moments instead of closing exclusively.
It was easy to overlook Bednar in the Pirates' return for Joe Musgrove; he was a 35th-round pick in 2016 and struggled to a 6.75 ERA in his first 17.1 major-league innings with San Diego from 2019-20. The 26-year-old showed up to camp with his new team in 2021 and began opening eyes in the Grapefruit League, ultimately finishing with 18 strikeouts and only one walk allowed in 8.2 scoreless spring innings. The Pirates informed Bednar after his March 29 outing that he'd made the team (even with options remaining), and with his velocity ticking up in exhibition play all the way to 99 mph, it's now rather easy to draw the line to Bednar eventually being in the ninth inning for Pittsburgh. The Pirates' bullpen is completely unsettled, and if Bednar's spring dominance carries over into the regular season, he could separate from the pack quickly.
More Fantasy News