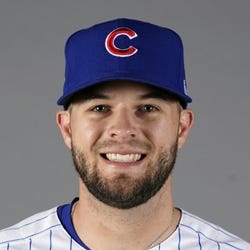 2022 Stats
AVG
.259
HR
4
RBI
12
R
15
SB
1
2023 Projections
AVG
HR
RBI
R
SB
Unlock Our Projections
2023 Fantasy Outlook
It was mostly a lost season for Bote in 2022, and he finished it by getting outrighted to Triple-A Iowa in November, which removes him from the 40-man roster heading into 2023. The utility player didn't make his season debut until late June due to shoulder surgery the previous offseason, and shoulder issues continued to hamper him throughout the year. Bote ended up playing in a career-low 41 games for the Cubs and appeared in nearly as many games at Triple-A (38). When healthy and playing more regularly, Bote has provided some value as a versatile defender who can occasionally offer some pop as well. His best season came in 2019, when he registered career bests with 11 home runs, 41 RBI and a .784 OPS across 127 games. That looks like a distant memory as he enters his age-30 season, as the likes of Nico Hoerner, Nick Madrigal and Patrick Wisdom figure to absorb most of Bote's potential playing time. He figures to be organizational depth in 2023 with limited fantasy appeal. Read Past Outlooks
read more
RANKS
#

* Exit Velocity and Barrels/PA % are benchmarked against 2019 data (min 400 PA) and Hard Hit Rate is benchmarked against last season's data (min 400 PA). See here for more exit velocity/barrels stats plus an explanation of current limitations with that data set.
BB/K
0.13
BB Rate
4.7%
K Rate
35.4%
BABIP
.382
ISO
.172
AVG
.259
OBP
.315
SLG
.431
OPS
.746
wOBA
.328
Exit Velocity
92.4 mph
Hard Hit Rate
32.4%
Barrels/PA
3.9%
Expected BA
.233
Expected SLG
.354
Sprint Speed
23.2 ft/sec
Ground Ball %
48.6%
Line Drive %
22.2%
Fly Ball %
29.2%
Prospect Rankings History
Advanced Batting Stats
Loading Advanced Batting Stats...
Additional Stats
Games By Position
Defensive Stats
Loading Games Played by Position...
Loading MLB Defensive Stats...
Batted Ball Stats
Loading Batted Ball Stats...
Stats Vs Upcoming Pitchers
Want more matchup stats?
View David Bote vs. Pitcher Stats
Loading Matchup Stats...
Cubs Depth Chart
Our full team depth charts are reserved for RotoWire subscribers.
Subscribe Now
Recent RotoWire Articles Featuring David Bote See More
NL FAAB Factor: Waiver Pickups of the Week
149 days ago
149 days ago
Jan Levine has profiled a couple of Atlanta starters who could provide fantasy worth down the stretch.
National League Trade Deadline Reactions
178 days ago
178 days ago
Juan Soto was the headline trade in the National League, but Jeff Erickson breaks down all of the NL trades at the deadline.
NL FAAB Factor: Waiver Pickups of the Week
219 days ago
219 days ago
Among his recommendations this week, Jan Levine profiles a couple middle-infield phenoms who provide plenty of potential.
NL FAAB Factor: Waiver Pickups of the Week
240 days ago
240 days ago
A couple middle infielders highlight Dan Marcus's list of NL additions.
Past Fantasy Outlooks
2022
2021
2020
2019
Bote's career appears to have peaked in 2019. It has been nothing but struggle since with 2022 not looking much better. Bote has hit under .200 over the last two seasons around his walks and strikeouts, and he is spending the offseason recovering from November left shoulder surgery. Front shoulder surgery for a hitter is never a good thing as it limits the extension a hitter can get on the swing thereby limiting the hitter's power. Given Bote's struggles the past two seasons with hitting, you are safer planning on another down year rather than hoping he rediscovers his 2018-19 form.
Bote is often more valuable in real life than he is in fantasy. The 27-year-old is able to play multiple infield positions and handle the bat decently, which makes him a useful reserve for the Cubs, especially with Kris Bryant dealing with some injury issues the past few seasons. However, the presence of Bryant and several other players keeps Bote from playing every day, and that of course limits his fantasy appeal. Bote appeared in 45 games during the shortened 2020 campaign, slashing .200/.303/.408 with seven home runs and a team-high 29 RBI. His best season came a year earlier, when he played in 127 games and hit 11 home runs with a .784 OPS. The Cubs have a 2021 team option on Bryant, though his name has also come up as a potential trade candidate. Bote's 2021 outlook largely depends on what happens with Bryant. If regular playing time opens up at third, Bote will see his fantasy stock rise.
Bote's defensive versatility provided him with considerable, albeit inconsistent, playing time during the 2019 season. His output was once again hindered by a 1.86 GB/FB rate, which would have ranked ninth-worst among all hitters had he qualified. The 26-year-old had an above-average walk rate of 12.4%, but also carried a 26.1 K%, which is especially concerning given his lack of power. Bote's 2020 outlook took another hit when Nico Hoerner impressed in his limited sample at shortstop late in the season; Javier Baez figures to shift to second base, blocking Bote's best path to playing time. Given Bote's modest production in limited opportunities over the past two seasons, he's best left for NL-only leagues, with duel eligibility (3B and 2B) helping his case in those formats. If Kris Bryant is traded, Bote could sneak into the mixed-league conversation, though he's unlikely to be a difference maker.
Bote is a hard guy to figure out. If we combine his Triple-A and major-league numbers from last season, we get 19 home runs and 140 runs-plus-RBI in 473 plate appearances. That's exciting if we prorate those numbers over the course of a full season, but his batting average and on-base percentage are both slightly below the league average. He will, as manager Joe Maddon loves to say, "accept his walk," but he also strikes out a lot. We don't yet have enough of a sample size to get into what his split are, but we do have enough data to show that his power upside is going to be limited by a high groundball rate. He has tried to add more loft to his swing, but it will be tough to overcome his 2.4 groundball-to-flyball ratio. At least Bote's utility role should remain intact.
More Fantasy News