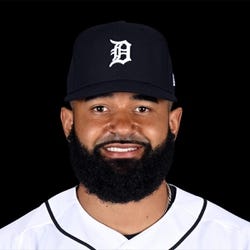 2022 Stats
AVG
.229
HR
1
RBI
3
R
8
SB
3
2023 Projections
AVG
HR
RBI
R
SB
Unlock Our Projections
2023 Fantasy Outlook
A first-round pick by the Tigers in 2014, Hill has carried the "bust" label for several years now due to injury and middling performance. He is still just 27 years old, however, and showed in his brief sample with Detroit last year that he can still turn on the burners, posting sprint speed ranking in the 97th percentile. Hill appeared in 80 MLB games over the past two seasons and slashed .248/.297/.351 with 70 strikeouts, four home runs and nine steals in 12 attempts -- certainly not great, but not completely embarrassing for a player who can play a high-level center field. The Nationals brought Hill in on a minor-league contract with an invitation to major-league spring training. Washington will have a lot of at-bats to spread around in the first full year of its rebuild, and Hill could end up with some of those, if mostly by attrition over the course of a long season. Read Past Outlooks
read more
League NRI
Bats R
Throws R
40 Man No
Height 6'2"
Weight 190
DOB 12/30/1995
Born Des Moines, IA
College None
Drafted 1st Rd 2014 DET
$Signed a one-year, minor-league contract with the Nationals in November of 2022.

* Exit Velocity and Barrels/PA % are benchmarked against 2019 data (min 400 PA) and Hard Hit Rate is benchmarked against last season's data (min 400 PA). See here for more exit velocity/barrels stats plus an explanation of current limitations with that data set.
BB/K
0.18
BB Rate
5.4%
K Rate
30.4%
BABIP
.327
ISO
.060
AVG
.229
OBP
.270
SLG
.289
OPS
.559
wOBA
.251
Exit Velocity
85.2 mph
Hard Hit Rate
18.6%
Barrels/PA
2.2%
Expected BA
.193
Expected SLG
.242
Sprint Speed
25.6 ft/sec
Ground Ball %
49.0%
Line Drive %
21.6%
Fly Ball %
29.4%
Prospect Rankings History
Advanced Batting Stats
Loading Advanced Batting Stats...
Additional Stats
Games By Position
Defensive Stats
Loading Games Played by Position...
Loading MLB Defensive Stats...
Batted Ball Stats
Loading Batted Ball Stats...
Stats Vs Upcoming Pitchers
Want more matchup stats?
View Derek Hill vs. Pitcher Stats
Loading Matchup Stats...
Nationals Depth Chart
Our full team depth charts are reserved for RotoWire subscribers.
Subscribe Now
Recent RotoWire Articles Featuring Derek Hill See More
MLB: Postseason Cheat Sheet and Strategy
118 days ago
118 days ago
Todd Zola tackles the MLB Postseason Cheat Sheet for RotoWire and discusses his approach to postseason leagues this year.
AL FAAB Factor: Waiver Pickups of the Week
255 days ago
255 days ago
Erik Siegrist reviews the available talent in the American League and suggests grabbing the Mariners' Kyle Lewis before his season debut Monday.
Spring Training Job Battles: American League
309 days ago
309 days ago
Erik Halterman reviews spring training job battles in the American League, including in Seattle where top prospect Julio Rodriguez is pushing for a roster spot.
Past Fantasy Outlooks
2017
2016
2015
The ultra-athletic Hill was a first round selection by the Tigers in the 2014 draft, but he has struggled to stay healthy or make consistent contact since entering the minors. Quad and knee injuries limited him to 53 games in 2015 and he ended 2016 on the disabled list following reconstructive elbow surgery. He hit a career-best .266 while repeating Low-A in 2016, though he bashed just one home run and struck out 105 times in 93 contests. While Hill swiped 35 bases over that span, he posted an anemic .312 OBP. The injuries, lack of power and impatience at the dish have caused Hill's prospect luster to fade, as his baseball skills have not been able to catch up with his raw tools. Hill remains a stellar defensive center fielder with plus-plus speed, but the 20-year-old has major red flags in the batter's box. Staying healthy in 2017 will be paramount if he is to make up for lost time.
Injuries have stalled the development of the Tigers’ first-round pick in the 2014 draft. Hill has played in just 90 games since being drafted, primarily due to lower-body injuries, and he dealt with a quad issue in April and then missed the entire second half with a knee injury. The number-one selling point with Hill as a fantasy prospect is his speed, which bordered on 80-grade entering the draft. However, as the lower-body injuries have mounted, not only has his speed been put at risk but he has also lost valuable reps to improve upon a fringey hit tool. It is too early to write off Hill entering his age-20 season, but the onus is now on him to prove he can stay relatively healthy over a full season before dynasty league owners start to buy back in.
The Tigers selected Hill with their first-round pick of the 2014 first-year player draft. Immediately after being selected, Hill was considered one of the Tigers' best prospects. The 19-year-old outfielder possesses plus-plus speed, which allows him to be a disruptive force on the basepaths. He’s also considered a premium defender and will likely patrol center field once he reaches the majors. At the plate, Hill has demonstrated elevated discipline for a player of his age, but his power potential appears to be limited to the double-digit range if he doesn’t more bulk than expected. Even with low-to-modest power production, Hill’s stellar speed and defense should one day earn him a regular spot in a major league lineup. He’ll need to work his way through the minors over the next few years, but Hill will eventually be a regular presence in Detroit’s outfield if he develops as projected.
More Fantasy News