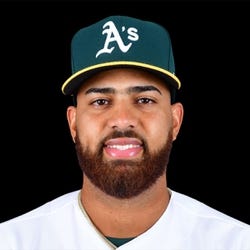 * Exit Velocity and Barrels/PA % are benchmarked against 2019 data (min 400 PA) and Hard Hit Rate is benchmarked against last season's data (min 400 PA). See here for more exit velocity/barrels stats plus an explanation of current limitations with that data set.
BB/K
0.15
BB Rate
6.4%
K Rate
44.0%
BABIP
.339
ISO
.181
AVG
.207
OBP
.264
SLG
.388
OPS
.652
wOBA
.287
Exit Velocity
86.5 mph
Hard Hit Rate
34.4%
Barrels/PA
6.4%
Expected BA
.167
Expected SLG
.324
Sprint Speed
23.8 ft/sec
Ground Ball %
45.9%
Line Drive %
18.0%
Fly Ball %
36.1%
Prospect Rankings History
View Complete Dermis Garcia Prospect Ranking History
Advanced Batting Stats
Loading Advanced Batting Stats...
Additional Stats
Games By Position
Defensive Stats
Loading Games Played by Position...
Loading MLB Defensive Stats...
Batted Ball Stats
Loading Batted Ball Stats...
Stats Vs Upcoming Pitchers
Want more matchup stats?
View Dermis Garcia vs. Pitcher Stats
Loading Matchup Stats...
Athletics Depth Chart
Our full team depth charts are reserved for RotoWire subscribers.
Subscribe Now
Recent RotoWire Articles Featuring Dermis Garcia
Todd's Takes: Popping Out and Popping Off
90 days ago
90 days ago
Todd Zola discusses foul territory and the new MLB rules before picking out the most fantasy-relevant bits of info from Friday's MLB slate.
AL FAAB Factor: Waiver Pickups of the Week
96 days ago
96 days ago
Erik Siegrist checks out the American League waiver wire after September roster expansion as Gunnar Henderson provides a boost to Baltimore's playoff push.
Past Fantasy Outlooks
2018
2017
When gambling on a power hitter with significant swing-and-miss issues, it’s best to target young, high-pedigree players who also walk a lot and offer top-of-the-spectrum power. Garcia checks all of those boxes. He was a prized international signing in 2014, and has true 80-grade raw power. His 27.7 percent strikeout rate in the Appalachian League was the best mark of his career, and after a promotion to Low-A, he was back to whiffing at a 33.6 percent clip, while also walking at an 11.2 percent rate -- the third best mark by a teenager in the Sally League. Among players in that league with at least 100 plate appearances, Garcia’s .291 ISO ranked second, and the next closest mark by a teenager was .201 (Carter Kieboom). His defensive home is uncertain, but third base, first base and DH are all in play. He will likely never hit even .250 in the majors, but if he gets on base enough to play every day, he would easily hit 30-plus homers over a full season. Essentially, he might be the next Joey Gallo.
Garcia showed in the Appalachian League that his swing certainly packs a punch. Of course, that only occurred when he managed to make solid contact, and that didn't happen all that often. The 18-year-old posted a .454 slugging percentage, thanks largely to 13 home runs, but finished barely above the Mendoza Line for the season as he fanned 79 times. Garcia has already shifted from shortstop to third base, and with that move comes greater emphasis on the development of his bat. His primary area of focus in 2017 will be making more consistent contact at the dish, likely at Low-A to begin the season.
More Fantasy News