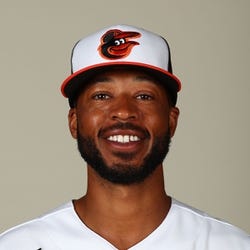 2022 Stats
W-L
4-4
ERA
3.05
WHIP
0.99
K
60
SV
5
2023 Projections
W-L
ERA
WHIP
K
SV
Unlock Our Projections
2023 Fantasy Outlook
Tate was arguably Baltimore's most important reliever last season. With Tyler Wells shifting from the bullpen to the starting rotation, and the team trading away two relievers right before the season, Tate was a workhorse for the O's, pitching a career-high 73.2 innings across 67 appearances. His strikeout rate (20.5%) doesn't stand out, but he makes up for it with an upper-50s groundball percentage thanks to his league-best sinker as measured by Statcast run value (-21). Tate's changeup was excellent for the fourth year in a row and his slider supplanted his cutter as a secondary he could reliably count on. The 28-year-old added five saves and 16 holds in his setup role to compliment his rock-solid 3.05 ERA (3.47 FIP), 0.99 WHIP and career-best 5.5% walk rate. Some ratio regression is likely, but Tate should remain part of the bridge to Felix Bautista and pitch in a handful of ancillary saves in 2023. Read Past Outlooks
read more
RANKSFrom Preseason
#

* Exit Velocity, Barrels/BBE %, Balls Hit 95+ MPH %, and Spin Rate are benchmarked against 2019 data (min 30 IP). See here for more exit velocity/barrels stats plus an explanation of current limitations with that data set.
K/BB
3.75
K/9
7.3
BB/9
2.0
HR/9
0.7
Fastball
94.0 mph
ERA
3.05
WHIP
0.99
BABIP
.257
GB/FB
2.77
Left On Base
68.1%
Exit Velocity
81.7 mph
Barrels/BBE
4.7%
Spin Rate
2011 rpm
Balls Hit 95+ MPH
26.6%
Swinging Strike
10.7%
Prospect Rankings History
View Complete Dillon Tate Prospect Ranking History
Advanced Pitching Stats
Loading Advanced Pitching Stats...
Defensive Stats
Loading MLB Defensive Stats...
Stats Vs Today's Lineup
Want more matchup stats?
View Dillon Tate vs. Batter Stats
Loading Matchup Stats...
Orioles Depth Chart
Our full team depth charts are reserved for RotoWire subscribers.
Subscribe Now
Recent RotoWire Articles Featuring Dillon Tate
Closer Encounters: 2022 Saves in Review, Part 1
50 days ago
50 days ago
Ryan Rufe recaps this past season's saves landscape. Just how many teams preferred closer committees over the conventional approach?
Collette Calls: Scoring Tweaks
62 days ago
62 days ago
Jason Collette advocates for more experimentation with scoring setups in order to give fantasy relevance to a larger pool of pitchers.
Past Fantasy Outlooks
2021
2020
2017
2016
Summer camp did not have stats but it did have injuries. Tate experienced forearm soreness in an intrasquad game in July, and while an MRI showed no structural damage, the injury cost him the first three-plus weeks of the season. A right finger sprain later forced Tate to the IL late in September, but in between he was quite good, posting a 3.24 ERA and a couple holds with only one HR allowed in 16.2 innings. The No. 4 overall pick by the Rangers in 2015, Tate has been traded twice and lost his shine a while ago, but his future as a major-league reliever looks a lot brighter than it did at this time last year. He continued with his sinker-heavy approach but showed more confidence in his slider last season and enjoyed great results with the pitch. Assuming he's healthy, Tate should compete for a setup role, and if he shows another level with the strikeout rate, he could challenge for saves.
Tate converted almost exclusively to relief in 2019, starting just three times after previously starting nearly all of his games. The transition appeared to work in the minors, as he cruised to a 3.25 ERA in 44.1 innings across the three highest levels of the Orioles' system, striking out 22.2% of opposing batters while walking 5.6%. He looked overmatched in his 21-inning big-league debut, posting a 6.43 ERA, though his peripherals weren't all that bad. His 21.5% strikeout rate and 9.7% walk rate weren't too much worse than league average and are numbers that could theoretically work for a middle reliever given his 59.3% groundball rate. He no longer appears to have a future as a starter, however, and he doesn't look likely to be near the top of the closer depth chart even in Baltimore.
Tate was selected with the fourth overall pick in the 2015 draft by the Rangers. The UC Santa Barbara standout didn't quite have the expected polish, though, and saw his velocity dip as a starter at Low-A to begin the 2016 campaign. Tate also battled a hamstring injury, limping to a 5.12 ERA in 65 innings. Opposing batters hit .311 against the 22-year-old righty, who was unable to strike out one batter per inning. His control was also suspect, as he walked 27 batters in those 65 innings. Tate was eventually dealt to the Yankees in the Carlos Beltran trade, where he finished the season in the bullpen with better success. Tate was a closer in college, and it remains to be seen if the Yankees will continue developing him as a starter. Regardless of his role, Tate's live arm still possesses plenty of upside. Still, he needs to improve his changeup as well as his command to remain a viable starting option.
The first pitcher selected in last year’s draft (fourth overall), Tate is a difficult player to evaluate at this point, as it is completely unclear if he will be able to make it as a starter. He has a plus-plus heater and a hard slider that could be an out pitch at the highest level -- essentially the tools to be a shutdown reliever. However, given the investment the Rangers made in the 6-foot-2 righty, he will be developed as a starter for now. Tate, 21, allowed one run while striking out eight and walking three in nine innings (six appearances) across short-season and Low-A last year, but it’s nearly impossible to draw anything from that, as they were one or two-inning appearances and the sample size is minuscule. If a third pitch comes along and Tate can show the ability to withstand a heavy workload, the Rangers could have a top-of-the-rotation starter, and if not, he has the realistic floor of an above-average big league closer.
More Fantasy News