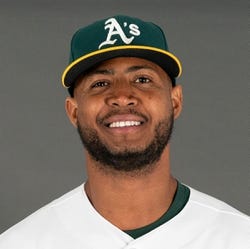 2022 Stats
W-L
4-4
ERA
3.33
WHIP
0.99
K
58
SV
4
2023 Projections
W-L
ERA
WHIP
K
SV
Unlock Our Projections
2023 Fantasy Outlook
After being a logical candidate to see save chances based on his steady performance throughout 2022, Acevedo finally saw ninth-inning duties over the final weeks, recording Oakland's last four saves of the season. However, injuries to other A's late-inning relievers essentially forced manager Mark Kotsay's hand, as Acevedo became his most trusted option by default. No matter the circumstances, the 28-year-old still turned in the best season of his career. Acevedo had one of the best changeups in the league as measured by Statcast run value (-8) while posting a top-25 WHIP (0.99) among qualified relievers. His 80.2% in-zone contact percentage was solid and his 15.9% SwStr% suggests we could see his strikeout rate improve. That said, Acevedo is no sure bet to close in 2023 and is a better bet for only a handful of saves rather than double-digits. Read Past Outlooks
read more
League Majors
Bats R
Throws R
40 Man Yes
Height 6'7"
Weight 240
DOB 6/3/1994
Born Villa Los Almacigos, DR
College None
Drafted 2013 NYY
$Signed a one-year contract with the Athletics in August of 2021.

* Exit Velocity, Barrels/BBE %, Balls Hit 95+ MPH %, and Spin Rate are benchmarked against 2019 data (min 30 IP). See here for more exit velocity/barrels stats plus an explanation of current limitations with that data set.
K/BB
3.41
K/9
7.7
BB/9
2.3
HR/9
1.2
Fastball
93.0 mph
ERA
3.33
WHIP
0.99
BABIP
.236
GB/FB
1.10
Left On Base
75.4%
Exit Velocity
80.7 mph
Barrels/BBE
5.5%
Spin Rate
2062 rpm
Balls Hit 95+ MPH
19.7%
Swinging Strike
15.9%
Prospect Rankings History
View Complete Domingo Acevedo Prospect Ranking History
Advanced Pitching Stats
Loading Advanced Pitching Stats...
Defensive Stats
Loading MLB Defensive Stats...
Stats Vs Today's Lineup
Want more matchup stats?
View Domingo Acevedo vs. Batter Stats
Loading Matchup Stats...
Athletics Depth Chart
Our full team depth charts are reserved for RotoWire subscribers.
Subscribe Now
Recent RotoWire Articles Featuring Domingo Acevedo
The Z Files: OK, I'm SOLD
7 days ago
7 days ago
Todd Zola reconsiders his stance against adding holds as a roto category, and takes a look at the impact it would have on relievers like Devin Williams.
Closer Encounters: 2022 Saves in Review, Part 2
52 days ago
52 days ago
Ryan Rufe recaps the saves landscape in this year's NFBC Main Event and shares his own hits and misses from this past season.
Closer Encounters: 2022 Saves in Review, Part 1
58 days ago
58 days ago
Ryan Rufe recaps this past season's saves landscape. Just how many teams preferred closer committees over the conventional approach?
MLB FAAB Factor: Waiver Pickups of the Week
78 days ago
78 days ago
Jason Shebilske offers his top waiver pickups of the week, including Domingo Acevedo, who should serve as Oakland's closer down the stretch.
Mound Musings: The 2022 Pitching Awards Issue
78 days ago
78 days ago
Brad Johnson reveals his 2022 Pitching Awards, with Dylan Cease earning Pitcher of the Year honors.
Past Fantasy Outlooks
2017
2016
The Yankees may have found a diamond in the rough in Acevedo, who had been brought along slowly until having a breakout season in 2016. Acevedo tormented hitters at Low-A using a combination of a blazing fastball, stellar changeup and emerging slider. The fastball is his best pitch, and he can hit triple digits on the radar gun. He was just as dominant after a jump in levels, notching a 3.22 ERA and 54:15 K:BB in 50.1 innings. The impeccable control is particularly noteworthy given Acevedo's 6-foot-7 stature. The development of his slider, which improved in 2016, will go a long ways toward determining his future role. Acevedo also spent three separate stints on the disabled list in 2016, so his health is worth monitoring. For now, Acevedo will remain in the starting rotation and likely return to High-A to start the 2017 season, with a quick promotion in the works if he gets off to a fast start once again.
Acevedo spent the majority of 2015 with Low-A Staten Island, posting very impressive numbers through 11 starts (1.69 ERA, 9.9 K/9). The 21-year-old relies heavily on his fastball — a pitch that has movement and can reach up to 100 mph, though his command is still a work in progress. The big righty leans on a slider and changeup as his secondary offerings, and both project as above-average pitches in time. Given his velocity and issues with command, Acevedo could eventually work out of the bullpen, but he's being developed as a starter for the time being. He should get a chance to start moving up the organizational ranks this year, but the majors are still at least a couple of years away.
More Fantasy News