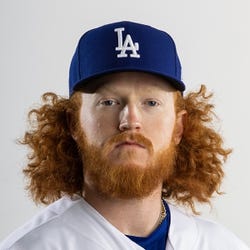 2022 Stats
W-L
2-3
ERA
4.50
WHIP
1.17
K
29
SV
0
2023 Projections
W-L
ERA
WHIP
K
SV
Unlock Our Projections
2023 Fantasy Outlook
It took May 475 days to resume his major league pitching career after his Tommy John Surgery in May of 2021. He made six starts for the Dodgers and pitched about as well as any young arm recovering from a major surgery would. The velocity and movement were there as those two aspects are typically the first things to come back, but the command was not as he struggled to throw strikes and was more hittable than the guy we saw before he went down with his injury. Even with all the challenges, he still had three pitches with greater than a 30% whiff rate, so it really comes down to him getting more repetitions and rediscovering his command. His electric stuff is rarely straight, but he must be able to put it where it needs to go and not rely upon it getting there accidentally. The work on reshaping his slider toward the end of the season is worth watching as well. Drafting his full ceiling is risky given the fact he has never worked a full season at the major league level and has never eclipsed the 135 inning mark in any one season as a professional. Read Past Outlooks
read more
RANKSFrom Preseason
#

* Exit Velocity, Barrels/BBE %, Balls Hit 95+ MPH %, and Spin Rate are benchmarked against 2019 data (min 120 IP). See here for more exit velocity/barrels stats plus an explanation of current limitations with that data set.
K/BB
2.07
K/9
8.7
BB/9
4.2
HR/9
0.9
Fastball
97.7 mph
ERA
4.50
WHIP
1.17
BABIP
.245
GB/FB
2.05
Left On Base
58.4%
Exit Velocity
80.2 mph
Barrels/BBE
3.1%
Spin Rate
2477 rpm
Balls Hit 95+ MPH
20.9%
Swinging Strike
13.5%
Prospect Rankings History
View Complete Dustin May Prospect Ranking History
Advanced Pitching Stats
Loading Advanced Pitching Stats...
Defensive Stats
Loading MLB Defensive Stats...
Stats Vs Today's Lineup
Want more matchup stats?
View Dustin May vs. Batter Stats
Loading Matchup Stats...
Dodgers Depth Chart
Our full team depth charts are reserved for RotoWire subscribers.
Subscribe Now
Recent RotoWire Articles Featuring Dustin May
2023 Fantasy Baseball Rankings - Way Too Early Top 300 Draft Ranks
40 days ago
40 days ago
James Anderson provides a way too early top 300 rankings for those who have the itch to start drafting for 2023.
The Z Files: NFBC Holdem Rankings and Strategies
50 days ago
50 days ago
Todd Zola shares his gameplan and his rankings for NFBC Postseason Holdem contests.
MLB: Postseason Cheat Sheet and Strategy
54 days ago
54 days ago
Todd Zola tackles the MLB Postseason Cheat Sheet for RotoWire and discusses his approach to postseason leagues this year.
Fantasy Baseball Injury Report: End of Regular-Season Wrap-Up
63 days ago
63 days ago
Jeff Stotts breaks down significant injuries as the MLB regular-season winds down and he starts with Ronald Acuna, who's had a disappointing season while recovering from an ACL tear suffered last season.
Todd's Takes: Passing Judgment
68 days ago
68 days ago
Todd Zola discusses the AL MVP race and shares his biggest fantasy takeaways from Wednesday's MLB action.
Past Fantasy Outlooks
2021
2020
2019
2017
While May was used in a flexible role during the postseason, he was mostly a true starter during the regular season, starting 10 of his 12 games. Judging purely by his 2.57 ERA, it appears as though he's already delivering on his considerable hype, but his underlying numbers don't paint him in quite the same light, especially his 4.62 FIP. May's 54.7% groundball rate and 7.1 BB% were both strong, but his 19.6 K% wasn't very impressive. He wasn't a high strikeout guy in the minors, either, posting a 23.3 K% at the two highest levels. May's 8.4% swinging-strike rate came in a full three ticks below league average, so, despite his pedigree, don't expect him to suddenly start racking up whiffs any time soon. It's certainly possible to carve out a long and successful career with modest strikeout numbers, and May has the rest of the profile necessary to make that work, but it does put a cap on his ceiling.
May logged over five innings in four of his first five MLB appearances and then shifted to a bullpen role due to the Dodgers' impressive rotation depth. He is the best pitching prospect in a deep system, even though his strikeout rates don't stand out. His 44.4 GB% in the majors was easily his worst mark in pro ball, and generating weak contact will be critical if May is to be a No. 2 or No. 3 starter. His repertoire is unusual, as his three best pitches (sinker, cutter, fourseam fastball) are all thrown at over 90 mph, while he has not had much success with his curveball, changeup or slider. That said, he turned 22 in September, so he is not a finished product, and no other MLB pitcher his age throws six distinct pitches with above-average command. There will be stiff competition for the Dodgers' final rotation spots. Even if May doesn't break camp in the rotation, he should still make double-digit starts.
If May can improve his secondary pitches, he would have No. 2 starter upside. Considering he is entering his age-21 season, we certainly can't rule out that possibility. A lean 6-foot-6, 180-pound righty, May has steadily increased his fastball velocity, and that pitch is now a mid-90s worm-killing monster (GB% around 55%), which gives his repertoire an excellent base. He has two decent secondary offerings in his curveball and cutter, but both pitches still need a good deal of refinement. His control was excellent (4.2 BB%) in 17 starts at High-A, and while that mark almost doubled after a promotion to Double-A (8.3 BB%), he comfortably projects to have at least 50-grade command/control in the majors. May should return to Double-A to start the year, but could spend most of 2019 at Triple-A. If he improves those two secondary offerings, his stock will skyrocket. If not, he could be a groundball-heavy No. 4 starter or power reliever.
A tall, lanky right-hander boasting an impressive mid-90s fastball with sink, May showed unexpectedly stellar command in 30.1 innings in the Arizona League following the 2016 draft. The teenager posted a 34:4 K:BB over that span, did not allow a single home run and ended up with a 3.86 ERA in his first taste of the minors. At 6-foot-6, there are some concerns about his ability to repeat his delivery, though May did not have any issues to begin his professional career. It is just as likely that May ends up in the bullpen, but for now he will remain a starter. The development of a third pitch will be key in his growth. The Dodgers could decide to be bullish on May and start him at Low-A Great Lakes to begin the 2017 campaign.
More Fantasy News