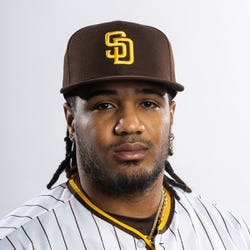 2022 Stats
AVG
.200
HR
0
RBI
0
R
0
SB
0
2023 Projections
AVG
HR
RBI
R
SB
Unlock Our Projections
2023 Fantasy Outlook
Rosario boosted his prospect stock considerably with a strong 2021 campaign in Double-A, then took another step forward with an even better performance in Triple-A last season. His 22 homers were easily the most he has hit in a single season as a pro, and he added 21 thefts (in 29 attempts) to join 26 other minor-leaguers in putting up a 20/20 campaign. At 5-foot-9 and 150 pounds, Rosario isn't likely to see much more growth in terms of power, so he figures to be more of a gap hitter than one who swings for the fences in the majors. He has improved his plate discipline as he's made his way up the ladder, which bodes well for his ability to reach base and make use of his above-average speed that has resulted in four campaigns of 20-plus steals in five full minor-league seasons. Defensively, Rosario has a big arm and can play all over the infield, which should help him carve out a place in the majors. However, San Diego's infield got more crowded with the offseason addition of Xander Bogaerts, leaving little room for Rosario to step into a significant role. He could still see plenty of time with the big club in 2023, but he'll have a hard time finding enough at-bats to make an impact in fantasy. Read Past Outlooks
read more
RANKS
#600
ADP
#

Calculate Stats Over Time
Just click on any two dates.
Loading Minor League Batting Game Log...
Left/Right Batting Splits
Since 2020
-100%
OPS vs RHP
2022
-100%
OPS vs RHP
2021
No Stats
2020
No Stats
Home/Away Batting Splits
Since 2020
+900%
OPS at Home
2022
+900%
OPS at Home
2021
No Stats
2020
No Stats
Stat Review
How does Eguy Rosario compare to other hitters?
This section compares his stats with all batting seasons from the previous three seasons (minimum 400 plate appearances)*. The bar represents the player's percentile rank. For example, if the bar is halfway across, then the player falls into the 50th percentile for that stat and it would be considered average.