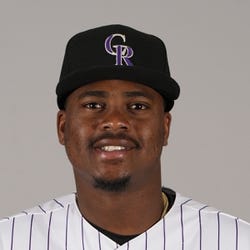 2022 Stats
AVG
.233
HR
6
RBI
20
R
21
SB
0
2023 Projections
AVG
HR
RBI
R
SB
Unlock Our Projections
2023 Fantasy Outlook
Montero made his MLB debut in 2022 and was solid in his first taste of the majors with a .233/.270/.432 slash line in 53 games. He struggled with strikeouts at time in the minors, which carried over to the big leagues with a 32.4 percent strikeout rate, and his 4.3 percent walk rate was also poor. However, those numbers at Triple-A were manageable, and he likely doesn't have much else to prove at the highest level of the minors. Colorado's infield appears mostly set with C.J. Cron at first base, Brendan Rodgers at second and Ryan McMahon at third, while top prospect Ezequiel Tovar appears primed to start at shortstop. Montero doesn't have a clear path to regular playing time to open 2023, so he may need to settle for a bench role early on, assuming he's able to crack the Opening Day roster. Read Past Outlooks
read more
RANKS
#554
ADP
League Majors
Bats R
Throws R
40 Man Yes
Height 6'3"
Weight 235
DOB 8/17/1998
Born Santo Domingo, DR
College None
Drafted 2014 STL
$Traded to the Rockies in February of 2021.

* Exit Velocity and Barrels/PA % are benchmarked against 2019 data (min 400 PA) and Hard Hit Rate is benchmarked against last season's data (min 400 PA). See here for more exit velocity/barrels stats plus an explanation of current limitations with that data set.
BB/K
0.13
BB Rate
4.3%
K Rate
32.4%
BABIP
.318
ISO
.199
AVG
.233
OBP
.270
SLG
.432
OPS
.702
wOBA
.305
Exit Velocity
89.8 mph
Hard Hit Rate
33.6%
Barrels/PA
5.4%
Expected BA
.213
Expected SLG
.338
Sprint Speed
23.1 ft/sec
Ground Ball %
37.1%
Line Drive %
21.6%
Fly Ball %
41.4%
Prospect Rankings History
View Complete Elehuris Montero Prospect Ranking History
Advanced Batting Stats
Loading Advanced Batting Stats...
Additional Stats
Games By Position
Defensive Stats
Loading Games Played by Position...
Loading MLB Defensive Stats...
Batted Ball Stats
Loading Batted Ball Stats...
Stats Vs Upcoming Pitchers
Want more matchup stats?
View Elehuris Montero vs. Pitcher Stats
Loading Matchup Stats...
Rockies Depth Chart
Our full team depth charts are reserved for RotoWire subscribers.
Subscribe Now
Recent RotoWire Articles Featuring Elehuris Montero See More
FanDuel MLB: Friday Targets
134 days ago
134 days ago
Chris Bennett suggests that Mookie Betts is a must-play at his salary Friday as part of a 12-game FanDuel slate.
MLB: One Man's Trash... (Week 23)
141 days ago
141 days ago
Jeff Zimmerman examines the week's most frequently dropped players in search anyone worth giving a second chance to. Should you be rushing to pick up Matt Manning?
MLB FAAB Factor: Waiver Pickups of the Week
163 days ago
163 days ago
Matt Manning's strong run of form since his return from a shoulder injury earns him a spot in Jason Shebilske's latest set of pickup recommendations.
NL FAAB Factor: Waiver Pickups of the Week
174 days ago
174 days ago
Jan Levine anticipates the return of a fairly high-profile pitcher to the LA rotation.
MLB FAAB Factor: Waiver Pickups of the Week
177 days ago
177 days ago
Jason Shebilske's list of top pickups of the week includes Rowan Wick, who looks like the Cubs' closer down the stretch.
Past Fantasy Outlooks
2022
2021
2019
The top hitter the Rockies got back in last offseason's trade that sent Nolan Arenado to St. Louis, Montero made a strong impression in his first season with his new organization. He hit .278/.360/.529 with 28 home runs, a 21.8 K% and a 10.6 BB% in 499 PA across Double-A and Triple-A. Montero is an aggressive hitter and a shaky defender at the infield corners, but with the designated hitter likely coming to the National League, there will be another way for him to get in the lineup. He has plus raw power, and while he may only have a 40-grade hit tool, Coors Field could help him hit for a passable average. The Rockies' depth chart is very fluid, but given that Montero is on the 40-man roster, he will likely make his big-league debut sometime this season.
Montero thrived in the lower levels of the minors before hitting a roadblock at Double-A in 2019, slashing .188/.235/.317 with a 31.1 K% in his first stint at that level. That Montero was overmatched may have had more to do with his age (he was 20 at the time of his promotion) and a pair of injuries (including a broken hamate bone in his left hand) than his skillset, and his struggles did not prevent the Cardinals from adding him to their 40-man roster the following November. Whether Montero's contact returns at the upper levels with more seasoning will be key; despite an aggressive approach at the plate, he demonstrated solid bat-to-ball skills and posted strikeout rates mostly in the teens prior to reaching Double-A. With that in mind, 2021 will be an important year for Montero. A strong showing early could lead to a callup to the big club, while further stumbles may stoke talk of his bust potential.
Sometimes a unique skill allows a hitter to have success even when it seems he should be an easy out. Montero is an uber-aggressive hitter with length in his swing that should, in theory, lead to hard contact that is mitigated by a lot of swing and miss. Fortunately, Montero has elite hand-eye coordination and barrel awareness that has allowed him to have immense success thus far, particularly as a 19-year-old at Low-A. He won the Midwest League batting title (.322 AVG) and took home MVP honors while finishing second in the league with a 157 wRC+. He maintained an impressive all-fields, line-drive-oriented approach after a promotion to High-A. All but one of his 16 home runs went to the pull side, but if he can maintain a strikeout rate around 20% while lacing line drives to all fields, he should continue to have a lot of success. Double-A will be a big test. He may outgrow third base, so it is imperative that he continues to rake.
More Fantasy News