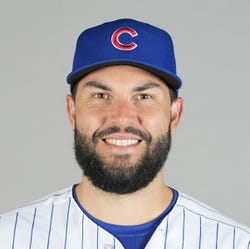 2022 Stats
AVG
.268
HR
8
RBI
44
R
38
SB
0
2023 Projections
AVG
HR
RBI
R
SB
Unlock Our Projections
2023 Fantasy Outlook
Hosmer was released by the Red Sox in December but latched on with the Cubs, and he should split time at first base with Trey Mancini in 2023. Hosmer's .268/.334/.382 slash line was good for a technically above-average 104 wRC+, but that sort of mediocre performance doesn't cut it at first base. Hosmer's fantasy appeal was even more muted, as he homered just eight times in 419 plate appearances. There's little reason to bet on a bounce back in 2023. Outside of a brief blip in 2020 (when he played just 38 games), that 104 wRC+ represents his best mark of the last five years, with his extreme groundball tendency the culprit as usual. He makes plenty of contact, posting a 15.3 K% last season, but his 3.1 degree average launch angle means most of that contact is harmless. Even if the shift ban means more of those grounders squeak through, it's unlikely to make him much of fantasy asset. Read Past Outlooks
read more
RANKS
#504
ADP
#