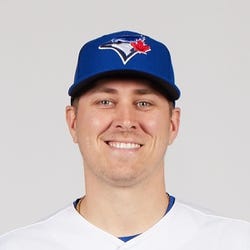 * Exit Velocity, Barrels/BBE %, Balls Hit 95+ MPH %, and Spin Rate are benchmarked against 2019 data (min 30 IP). See here for more exit velocity/barrels stats plus an explanation of current limitations with that data set.
K/BB
7.00
K/9
11.7
BB/9
1.7
HR/9
0.5
Fastball
93.7 mph
ERA
1.68
WHIP
0.91
BABIP
.307
GB/FB
0.79
Left On Base
84.8%
Exit Velocity
78.4 mph
Barrels/BBE
2.8%
Spin Rate
1985 rpm
Balls Hit 95+ MPH
16.1%
Swinging Strike
15.8%
Prospect Rankings History
View Complete Erik Swanson Prospect Ranking History
Advanced Pitching Stats
Loading Advanced Pitching Stats...
Defensive Stats
Loading MLB Defensive Stats...
Stats Vs Today's Lineup
Want more matchup stats?
View Erik Swanson vs. Batter Stats
Loading Matchup Stats...
Blue Jays Depth Chart
Our full team depth charts are reserved for RotoWire subscribers.
Subscribe Now
Recent RotoWire Articles Featuring Erik Swanson
The Z Files: Saving the Best for First
42 days ago
42 days ago
Todd Zola discusses the strategic decisions made to lock up a 2022 title in the Premature Edraftulation League, and nabs Trea Turner to headline the 2023 roster.
The Z Files: NFBC Holdem Rankings and Strategies
50 days ago
50 days ago
Todd Zola shares his gameplan and his rankings for NFBC Postseason Holdem contests.
MLB: Postseason Cheat Sheet and Strategy
54 days ago
54 days ago
Todd Zola tackles the MLB Postseason Cheat Sheet for RotoWire and discusses his approach to postseason leagues this year.
MLB: Six Underrated Players for the Final Weeks
79 days ago
79 days ago
Corbin Young highlights three veteran hitters and three interesting relievers to consider for the final few weeks of the season.
Closer Encounters: A First Look at Closers for 2023 Drafts
98 days ago
98 days ago
Ryan Rufe breaks down the 2023 closer market before taking a look at a handful of closer situations that are currently in flux.
Past Fantasy Outlooks
2021
2020
2019
Swanson made his big-league debut in 2019 and has since appeared in 36 games, including eight starts. The results have been poor, as he's surrendered a 6.58 ERA due in large part to a 2.7 HR/9. As implied by each of those numbers, hitters have not had a difficult time squaring up Swanson's offerings as he's surrendered a 12.8% barrel late, which has led to a .539 xSLG. In order for things to improve, Swanson will need to diversify his arsenal and trust more in his secondary pitches. In 2020, he threw his fastball 74.5% of the time, and a similar 67.7% rate in 2019. Despite working through the Yankees' and Mariners' minor-league systems primarily as a starter, it's difficult to foresee him getting another extended chance in the rotation until he expands his arsenal and his results improve. Heading into his age-27 season, those things appear unlikely to occur.
Among the three prospects acquired from the Yankees for James Paxton, Swanson played the largest role for Seattle in 2019, tossing 58 innings over 27 appearances. The right-hander scuffled in eight starts, compiling a 7.56 ERA and .277 BAA, but fared much better as a reliever, posting a .191 BAA and a respectable 3.28 ERA in 19 outings. Armed with a three-pitch arsenal centered around a 93-mph fastball, Swanson demonstrated solid strikeout ability throughout his minor-league career and translated that to a decent 21.2 K% in the majors. He also excelled at limiting walks, posting a 4.9 BB% that ranked in the top 10% among pitchers who threw 50-plus innings. Swanson's primary struggle was keeping the ball in the park; he gave up a 2.6 HR/9, fifth-worst in the league. Spring training will be important for Swanson in 2020 as he could conceivably emerge as a starter or reliever or head back to the minors.
Acquired from New York in the James Paxton trade, Swanson will likely use a lot of his bullets at the big-league level this upcoming season. He split his 2018 between the Yankees' Double-A and Triple-A affiliates, throwing 42.2 innings with Trenton and 72.1 frames with Scranton/Wilkes-Barre. The right-hander fared well at the highest level of the minor leagues, posting a 22.0 K-BB% and just a 17.9% line-drive rate. The numbers are less impressive when considering he was 24 years old, but the point is that he passed that last test and appears ready to graduate. Swanson is mostly a two-pitch guy (fastball/slider) and long term he may be better off as a multi-inning reliever, but it would make sense for the rebuilding Mariners to give him a chance to start in 2019. They will need rotation reinforcements when injuries inevitably hit.
More Fantasy News