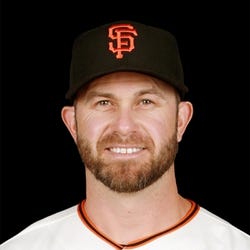 Out
Injury Thumb
Est. Return 2/1/2023
2022 Stats
AVG
.244
HR
14
RBI
42
R
31
SB
0
2023 Projections
AVG
HR
RBI
R
SB
Unlock Our Projections
2023 Fantasy Outlook
Longoria's debut was delayed a month after surgery on a ligament in his index finger. After playing through shoulder and hamstring soreness, Longoria was felled by an oblique injury, costing him a 10-day IL stint. After returning, it didn't take Longoria long to suffer a Grade 1 hamstring sprain, requiring another IL stint. Fittingly, Longoria missed the last few games with a fractured thumb. In between the injuries, he posted a 115 wRC+ and a 47% Hard Hit rate, so there is still some juice left in Longoria's bat. However, he did fan at a career high 28% clip while exhibiting below average defense. Longoria is clearly in the twilight of his career so he's probably looking at a platoon job with a lefty-heavy Diamondbacks lineup. Even if he does secure a starting gig, health is a problem and his skills aren't worth stashing, so he's only viable in leagues with a separate IL. Read Past Outlooks
read more
RANKS
#525
ADP
#