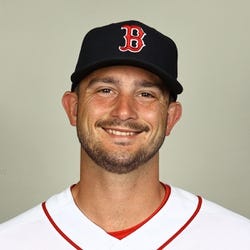 Out
Injury Hip
Est. Return 2/25/2023
2022 Stats
W-L
4-2
ERA
3.45
WHIP
1.02
K
82
SV
6
2023 Projections
W-L
ERA
WHIP
K
SV
Unlock Our Projections
2023 Fantasy Outlook
Whitlock's status last winter was sky high after his surprising major-league debut as a Rule 5 pick and there were as many speculating him as a starter as those believing he could even close. At the end of the day, he pitched nearly a 50/50 split as a starter and reliever with the latter work coming once he returned from the injured list with a hip issue in the summer. His numbers were more dominant as a reliever (.237 wOBA) than as a starter (.315 wOBA), but the hip certainly was a factor as it was bad enough require surgery to ultimately address the soreness after the season. The offseason acquisitions of both Kenley Jansen and Chris Martin should allow Boston the flexibility of pushing Whitlock back into the rotation as long as his offseason hip surgery recovery goes as well as expected. His overall numbers are helped by just how dominant he was in relief, but in two seasons of major league work, he has yet to have a pitch with below a 20% Whiff rate. Given the fact the entire Boston rotation is a health question mark, Whitlock could end up being the best of all the non-Sale options when it is all said and done. Read Past Outlooks
read more
RANKS
#290
ADP
#