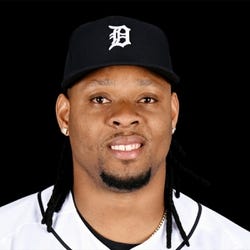 2022 Stats
W-L
2-11
ERA
3.28
WHIP
1.38
K
60
SV
30
2023 Projections
W-L
ERA
WHIP
K
SV
Unlock Our Projections
2023 Fantasy Outlook
Tigers manager A.J. Hinch announced Soto would enter 2022 as his closer only a few days after the 2021 season ended. With only a half-season of experience in the role and a career walk rate over 13%, expectations for the southpaw were low, especially given the veteran competition in Detroit's bullpen if things went south. However, Soto recorded a career high 30 of the Tigers' 38 saves last year for a 78.9% team save share that was third-highest among closers. He made his second All Star team and established career marks in ERA (3.28) and home run rate (0.3 HR/9) while still pumping heat at 98.4 mph on average. On the flip side, Soto's strikeout rate dipped nearly five percentage points to a league average 22.8%, while his 12.9% walk rate was sixth-worst among qualified relievers. Given these factors, plus the perennial trade rumors, drafting Soto for saves is a risky proposition in 2023. Read Past Outlooks
read more
RANKSFrom Preseason
#

* Exit Velocity, Barrels/BBE %, Balls Hit 95+ MPH %, and Spin Rate are benchmarked against 2019 data (min 30 IP). See here for more exit velocity/barrels stats plus an explanation of current limitations with that data set.
K/BB
1.76
K/9
9.0
BB/9
5.1
HR/9
0.3
Fastball
98.4 mph
ERA
3.28
WHIP
1.38
BABIP
.299
GB/FB
1.60
Left On Base
63.6%
Exit Velocity
83.3 mph
Barrels/BBE
3.7%
Spin Rate
2386 rpm
Balls Hit 95+ MPH
22.5%
Swinging Strike
11.7%
Advanced Pitching Stats
Loading Advanced Pitching Stats...
Defensive Stats
Loading MLB Defensive Stats...
Stats Vs Today's Lineup
Want more matchup stats?
View Gregory Soto vs. Batter Stats
Loading Matchup Stats...
Tigers Depth Chart
Our full team depth charts are reserved for RotoWire subscribers.
Subscribe Now
Recent RotoWire Articles Featuring Gregory Soto
2023 Fantasy Baseball Rankings - Way Too Early Top 300 Draft Ranks
40 days ago
40 days ago
James Anderson provides a way too early top 300 rankings for those who have the itch to start drafting for 2023.
Closer Encounters: 2022 Saves in Review, Part 2
42 days ago
42 days ago
Ryan Rufe recaps the saves landscape in this year's NFBC Main Event and shares his own hits and misses from this past season.
Closer Encounters: 2022 Saves in Review, Part 1
48 days ago
48 days ago
Ryan Rufe recaps this past season's saves landscape. Just how many teams preferred closer committees over the conventional approach?
Collette Calls: Scoring Tweaks
60 days ago
60 days ago
Jason Collette advocates for more experimentation with scoring setups in order to give fantasy relevance to a larger pool of pitchers.
Mound Musings: The 2022 Pitching Awards Issue
68 days ago
68 days ago
Brad Johnson reveals his 2022 Pitching Awards, with Dylan Cease earning Pitcher of the Year honors.
Past Fantasy Outlooks
2022
2021
Soto was a first-time All Star last year while collecting six wins, seven holds and 18 saves with a 3.39 ERA, 1.35 WHIP and 10.7 K/9 over 63.2 innings. Detroit used a closer committee for the first few months of 2021, but the job was Soto's alone from July through mid-September until a fractured finger ended his season. The southpaw possesses a nasty slider (.138 BA, 43% Whiff%) and brings 98-mph heat that ranks among the top 1% of the league, but he's a little wild with a 5.7 BB/9 that was eighth-worst among qualified relievers. Despite allowing a few too many baserunners, Tigers manager A.J. Hinch already named Soto the closer heading into 2022. Detroit is an up-and-coming team that finished 10th in the majors with 42 saves last season, so if Soto maintains the role all year, he could finish among the league leaders in saves. There is risk associated with the pick, but he's a fringe top-12 closer option.
Joe Jimenez's struggles led the Tigers to give other players opportunities for saves last year. Soto finished third on the team in that category with two, behind Jimenez (five) and Bryan Garcia (four). The second-year lefty's 4.30 ERA in 23 innings overall wasn't closer material, but it did at least come with some fairly interesting underlying numbers. His 13.3 BB% was poor, but his 29.6 K%, 53.7 GB% and 97.3 mph average fastball velocity were all well above average. Purely a sinker-slider reliever, Soto shut down lefties, holding them to a .391 OPS (albeit in a tiny sample of 27 plate appearances), while his .679 OPS allowed against righties wasn't bad either. Overall, his profile looks more like someone who could pitch in the seventh inning than the ninth, but the Tigers' lack of alternatives means Soto could add to his saves total in 2021, perhaps splitting the closer role with the right-handed Garcia.
More Fantasy News