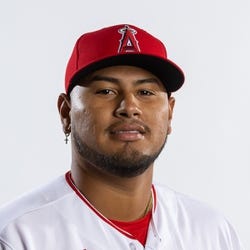 * Exit Velocity, Barrels/BBE %, Balls Hit 95+ MPH %, and Spin Rate are benchmarked against 2019 data (min 30 IP). See here for more exit velocity/barrels stats plus an explanation of current limitations with that data set.
K/BB
2.84
K/9
6.1
BB/9
2.2
HR/9
1.2
Fastball
92.0 mph
ERA
2.61
WHIP
1.03
BABIP
.235
GB/FB
1.07
Left On Base
79.6%
Exit Velocity
81.9 mph
Barrels/BBE
5.8%
Spin Rate
2153 rpm
Balls Hit 95+ MPH
23.3%
Swinging Strike
11.1%
Prospect Rankings History
View Complete Jaime Barria Prospect Ranking History
Advanced Pitching Stats
Loading Advanced Pitching Stats...
Defensive Stats
Loading MLB Defensive Stats...
Stats Vs Today's Lineup
Want more matchup stats?
View Jaime Barria vs. Batter Stats
Loading Matchup Stats...
Angels Depth Chart
Our full team depth charts are reserved for RotoWire subscribers.
Subscribe Now
Recent RotoWire Articles Featuring Jaime Barria
The Z Files: OK, I'm SOLD
Yesterday
Yesterday
Todd Zola reconsiders his stance against adding holds as a roto category, and takes a look at the impact it would have on relievers like Devin Williams.
Weekly Pitcher Rankings: Flying Solo
119 days ago
119 days ago
Todd Zola ranks pitchers ahead of a week in which very few have a pair of appealing starts, with Zack Wheeler a notable exception.
Collette Calls: Next Man Up
131 days ago
131 days ago
Jason Collette breaks down the players most likely to be dealt at the deadline as well as those who are set to benefit from increased playing time.
The Z Files: Sometimes, Crime Does Pay
197 days ago
197 days ago
Todd Zola examines the league-wide stolen-base environment and identifies some speedy players who could be valuable as streaming options, including Andres Gimenez.
Weekly Pitcher Rankings: What Have You Done Lately?
217 days ago
217 days ago
Todd Zola ranks the week's starting pitching as there is finally a big enough sample of outings to be actionable.
Past Fantasy Outlooks
2021
2020
2019
Barria is an intriguing pitcher, if only for the turnaround he put together in 2020 in the amount he did pitch. Barria closed the 2019 season with many of his indicators in the bottom 10th percentile of the league as hitters had little trouble squaring him up and sending rockets all over the field to the tune of a 6.42 ERA, .274 opponents' average and a 1.44 WHIP. Last season in seven games, he lowered those numbers to 3.62, .221, and 1.11, respectively. Barria took many of those same bad 2019 expected measures from the bottom 10th percentile to the top 10th percentile last season despite the fact he won't light up any radar guns. He effectively pairs his slider and fastball while mixing in changeups and sinkers to keep hitters off balance. Statcast says he most closely aligns to Masahiro Tanaka and Jake Odorizzi based on velocity and movement, yet will come much cheaper on draft day than those two.
Barria had a winning record and a 3.41 ERA across 26 starts as a 22-year-old rookie in 2018, but the juiced ball was not kind to flyball pitchers. His HR/FB rate essentially doubled and his HR/9 shot from 1.18 to 2.61, one of the 10 worst home-run rates in the majors (min. 50 IP). His Barrel%, xSLG, wOBA and xwOBA on contact all ranked in the bottom 10% in the league. While his K and BB rates both went in the right direction (20.6 K%, 7.4 BB%), it didn't matter given all the home runs against him. Barria ended up riding the shuttle for most of the year and spent some time in the bullpen. His numbers at home were actually pretty good (3.06 ERA, .210 BAA) and he's still very young, but until he shows more consistency in games that matter, Barria can't be trusted as a regular starter. At best, he's a low-end streamer in deep leagues.
Barria enjoyed quite a bit of success in the starting rotation as a 22-year-old rookie, but the peripherals were underwhelming. The righty barely managed two strikeouts for every walk he issued, finishing with a 9.5 K-BB% over 129.1 innings. That was a bottom-20 mark among 116 pitchers with at least 120 innings. Meanwhile, he gave up home runs at a 1.18 HR/9 clip. He had a dramatic reverse platoon split, with same-handed hitters combining for a .268/.358/.466 line against Barria (compared to .216/.275/.339 for lefties). That leaves him little margin for error against lefties. His minor-league track record suggests the control numbers could get better, though a 55.3% first-pitch strike rate and 39.5 Zone% don't portend significant improvement. The one major thing Barria has going for him is opportunity -- the Angels aren't exactly teeming with viable alternatives. We suggest going quality over quantity unless you're desperate for volume.
More Fantasy News