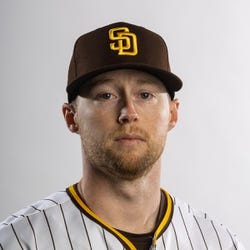 2022 Stats
AVG
.239
HR
17
RBI
88
R
88
SB
3
2023 Projections
AVG
HR
RBI
R
SB
Unlock Our Projections
2023 Fantasy Outlook
"Pesky" may be the best word to describe Cronenworth as a player. He did not have a particularly good season by his standards (.722 OPS), but he lays off pitches out of the zone and punishes mistakes. Despite a Statcast hard-hit rate ranking in the bottom quarter of the league, Cronenworth got to a respectable 17 homers last season. He made the most of his lineup placement batting in front of Manny Machado and eventually Juan Soto. He puts the ball in play at a strong clip (career 16.5 K%), but this is not a flashy talent. What makes Cronenworth appealing is dual-position eligibility (2B, 1B), everyday playing time in a good offense and a relatively high floor thanks to his contact and plate management skills. If everyone else is jumping at the perceived higher-upside players, welcome him to your roster with open arms as he's a strong bet to clear 600 plate appearances again. Read Past Outlooks
read more
RANKS
#186
ADP
#

* Exit Velocity and Barrels/PA % are benchmarked against 2019 data (min 400 PA) and Hard Hit Rate is benchmarked against last season's data (min 400 PA). See here for more exit velocity/barrels stats plus an explanation of current limitations with that data set.
BB/K
0.53
BB Rate
10.3%
K Rate
19.2%
BABIP
.275
ISO
.152
AVG
.239
OBP
.332
SLG
.390
OPS
.722
wOBA
.322
Exit Velocity
87.6 mph
Hard Hit Rate
25.6%
Barrels/PA
3.8%
Expected BA
.221
Expected SLG
.356
Sprint Speed
22.8 ft/sec
Ground Ball %
35.4%
Line Drive %
16.9%
Fly Ball %
47.7%
Prospect Rankings History
View Complete Jake Cronenworth Prospect Ranking History
Advanced Batting Stats
Loading Advanced Batting Stats...
Additional Stats
Games By Position
Defensive Stats
Loading Games Played by Position...
Loading MLB Defensive Stats...
Batted Ball Stats
Loading Batted Ball Stats...
Stats Vs Upcoming Pitchers
Want more matchup stats?
View Jake Cronenworth vs. Pitcher Stats
Loading Matchup Stats...
Padres Depth Chart
Our full team depth charts are reserved for RotoWire subscribers.
Subscribe Now
Recent RotoWire Articles Featuring Jake Cronenworth See More
FanDuel MLB: Sunday Targets
101 days ago
101 days ago
Chris Morgan checks out the two LCS matchups and provides his picks.
FanDuel MLB: Friday Targets
103 days ago
103 days ago
Chris Bennett breaks down Game 3 of the NLCS between the Padres and Phillies on Friday.
2023 Fantasy Baseball Rankings - Way Too Early Top 300 Draft Ranks
104 days ago
104 days ago
James Anderson provides a way too early top 300 rankings for those who have the itch to start drafting for 2023.
The Z Files: NFBC Holdem Rankings and Strategies
114 days ago
114 days ago
Todd Zola shares his gameplan and his rankings for NFBC Postseason Holdem contests.
Yahoo DFS Baseball: Sunday Picks
115 days ago
115 days ago
Chris Morgan is going with Pete Alonso to lead his lineup for Yahoo's single-game Sunday MLB contests.
Past Fantasy Outlooks
2022
2021
2020
On the surface, Cronenworth followed up on his strong 2020 campaign with an equal effort across a full 2021 season, but a deeper look offers reason for pause. Though he topped 20 home runs and his ISO remained stable at .194, Cronenworth's xSLG dipped from .538 to .445 and his barrel rate fell to a near league-average 7.2 percent clip. After successfully swiping three of four stolen bases in 2020, Cronenworth was successful on only four of seven attempts in 2021. Meanwhile his .283 BABIP suggests his .266 batting average should rise, yet his infield-flyball rate rose from 4.8% to 10.4% and his flyball rate from 29.4% to 36.1%. Despite some of these negatives, Cronenworth hit between second and fourth in the Padres' lineup in 504 of his 643 plate appearances in 2021. If he can maintain that role in 2022, he should remain a solid fantasy contributor in all five categories, though a significant jump in production doesn't appear to be a probable outcome.
Viewed by many as a secondary piece in the Tommy Pham-Hunter Renfroe-Xavier Edwards trade, Cronenworth broke out in the short 2020 season to finish tied for second in the NL Rookie of the Year voting. His mid-teens K% from the upper levels of the minors was copied-and-pasted over his first 192 PA in the majors (15.6%), and Cronenworth showed good gap power with 15 doubles (t-12th in MLB). Statcast suggests more of those would clear the fences in a more neutral setting; keep in mind the Padres played in a lot of spacious parks out west with the geographical scheduling of 2020. There is room for growth in the SB department as well as Cronenworth showed 92nd percentile sprint speed. His playing time at second base is now in question after the team signed Ha-seong Kim. That being said, Cronenworth can move around if necessary, like he did in 2020, gaining three-position eligibility in many leagues (2B, SS, 1B).
The Padres acquired Tommy Pham and a good prospect in an offseason trade that sent Hunter Renfroe and a great prospect (Xavier Edwards) to the Rays. That good prospect was Cronenworth, a big-league-ready infielder (shortstop by trade) who doubles as a right-handed reliever. He missed a third of the season with a hamstring injury, but led the International League with a .334 AVG and ranked fourth with a 0.79 BB/K. It was his age-25 season, but Cronenworth's plate skills seem legitimate, and he may end up with a 55-grade hit tool. Power probably won't be a big part of his game, but he could chip in 10-15 steals. He would need at least one injury to get starts on the left side of the infield and will be competing with newly-acquired Jurickson Profar and upwards of five other internal options for time at the keystone. His two-way ability could work as a tie breaker and give him the edge if Profar falters.
More Fantasy News