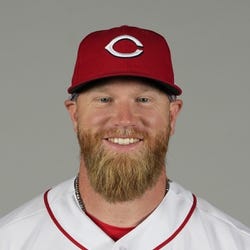 2022 Stats
AVG
.259
HR
12
RBI
28
R
33
SB
4
2023 Projections
AVG
HR
RBI
R
SB
Unlock Our Projections
2023 Fantasy Outlook
Fraley was acquired by the Reds from the Mariners just before the start of the 2022 campaign, and he took a major step forward when available with an .812 OPS and 12 home runs in 247 plate appearances. The problem being he was sidelined for much of the summer with knee and toe injuries and played in only 68 games. Still, Fraley cut his strikeout rate nearly five percentage points to 21.9 percent and took advantage of playing at hitter-friendly Great American Ball Park with a .287/.362/.511 slash line at home. The Reds aren't likely to make any significant splashes in free agency, so Fraley should receive regular playing time to open 2023. He could be a decent depth option for mix-league fantasy formats and could especially have value as a streamer for homestands. Read Past Outlooks
read more
RANKS
#311
ADP
#

* Exit Velocity and Barrels/PA % are benchmarked against 2019 data (min 400 PA) and Hard Hit Rate is benchmarked against last season's data (min 400 PA). See here for more exit velocity/barrels stats plus an explanation of current limitations with that data set.
BB/K
0.48
BB Rate
10.5%
K Rate
21.9%
BABIP
.289
ISO
.208
AVG
.259
OBP
.344
SLG
.468
OPS
.812
wOBA
.354
Exit Velocity
85.1 mph
Hard Hit Rate
27.4%
Barrels/PA
4.9%
Expected BA
.248
Expected SLG
.417
Sprint Speed
23.5 ft/sec
Ground Ball %
43.3%
Line Drive %
20.1%
Fly Ball %
36.6%
Prospect Rankings History
View Complete Jake Fraley Prospect Ranking History
Advanced Batting Stats
Loading Advanced Batting Stats...
Additional Stats
Games By Position
Defensive Stats
Loading Games Played by Position...
Loading MLB Defensive Stats...
Batted Ball Stats
Loading Batted Ball Stats...
Stats Vs Upcoming Pitchers
Want more matchup stats?
View Jake Fraley vs. Pitcher Stats
Loading Matchup Stats...
Reds Depth Chart
Our full team depth charts are reserved for RotoWire subscribers.
Subscribe Now
Recent RotoWire Articles Featuring Jake Fraley See More
MLB Roundtable Rankings: 2023 Fantasy Baseball Top 300
Yesterday
Yesterday
From Trea Turner to Spencer Torkelson, RotoWire's Roundtable Rankings crew offers their combined top 300 fantasy baseball rankings.
Collette Calls: Buckle Up
118 days ago
118 days ago
Jason Collette is excited for the increase in steals which the new rules should bring next season. Which hitters and pitchers will be affected the most?
MLB: One Man's Trash... (Week 25)
122 days ago
122 days ago
Jeff Zimmerman analyzes a handful of players who have been dropped frequently, with an eye towards figuring out how interesting they'll be next season.
Yahoo DFS Baseball: Monday Picks
143 days ago
143 days ago
Mike Barner’s Monday Yahoo picks include Jays starter Jose Berrios against visiting Tampa.
FanDuel MLB: Monday Targets
143 days ago
143 days ago
Framber Valdez hasn't allowed more than three runs in a start since April 19 and pitching against the Tigers who are last in MLB in runs scored and 29th in team OPS.
Past Fantasy Outlooks
2022
2021
2020
2019
2017
If you like OBP, Jake Fraley provides that. Throughout Fraley's short MLB career, he totaled 13 home runs and 11 steals with a slash line of .196/.320/.336 in 335 plate appearances. Fraley's high BB% at 17.4% comes a 26.8% K%. With more playing time, Fraley's upside could be a 20/20 season. However, Fraley's .531 OPS versus lefties may limit that. In terms of skills, Fraley rocks a 24.7% LD% and 5.9% barrel rate with a patient approach, evidenced by the 22.6% O-Swing% and 41.4% Swing% well below the league averages. Fraley dealt with a quad, hamstring, and shoulder injury throughout 2020-2021 that caused him to lose plate appearances. Outside of Mitch Haniger and Jarred Kelenic, Fraley will battle with Taylor Trammell, Dylan Moore, and Kyle Lewis in the outfield. Top prospect Julio Rodriguez is also on his way. Fraley serves as a cheap source of power and speed.
Fraley hasn't done much with his major-league opportunities, posting a .152/.200/.227 slash line and registering a 35.7 K% across 70 plate appearances over parts of the last two seasons. The outfielder's struggles are a sharp contrast to his hitting prowess in the minors. Between 2018 and 2019, Fraley batted .316 and struck out less than 20% of the time while progressing from High-A to Triple-A. His appeal grew with an emergence of power in 2019, when he more than doubled his previous minor-league output with 19 homers in only 382 at-bats. Fraley has reached double-digit stolen bases three times in four minor-league seasons, so he could have fantasy value as a moderate speed-power contributor if he can prove himself against big-league pitching. However, Fraley turns 26 in May and Jerred Kelenic is waiting in the wings, so Fraley's window to squeeze himself into Seattle's future plans could be closing.
The Mariners had to add Fraley to the 40-man in 2019 one way or another, so they selected his contract in August after he obliterated Double-A pitching (156 wRC+) and was OK in 38 games at Triple-A (104 wRC+). His season was cut short when he sprained ligaments in his thumb. Fraley missed significant time due to injuries earlier in his career, so he is not a normal 24-year-old from a developmental standpoint. The No. 77 pick from 2016 has been dominant at almost every MiLB stop. He is an above-average defender with above-average speed who excels at lifting the ball, but his LD% dipped after his promotion from Double-A while he worked on using the whole field. Fraley projects to be a better real-life player than Mallex Smith, so he will be given the opportunity this spring to take the center field job and run with it. There is some swing-and-miss in his game, but he has 20/20 upside.
Injuries prevented Fraley's career from taking off in his first full season after being selected by the Rays with the No. 77 overall pick in 2016. However, he hit .361/.449/.680 with 13 home runs and 39 steals over 40 games in the Australian Baseball League last offseason, which put him squarely back on the dynasty-league map. He followed that up by notching a 172 wRC+ in 260 plate appearances at High-A, but undisclosed injuries once again cost him time. An offseason trade to the Mariners put him on the national radar, which unfortunately ups the acquisition cost, but it was a boon for those who already had him rostered, as he goes from a club with ridiculous depth to an organization where he should have a clear path to playing time. Fraley is an excellent defender in center field, makes hard contact to all fields and rarely strikes out. The key going forward will be proving he can hold up over a full season. He will likely be assigned to Double-A.
The 21-year-old center fielder slashed .238/.339/.364 with a homer, 18 RBI, seven triples and 33 stolen bases at short-season Hudson Valley after being selected 77th overall in the 2016 first-year player draft. He posted a solid 14.2 percent strikeout rate and 83 percent contact rate while batting at or near the top of the order. The speed and plate skills make him somewhat intriguing, but will Fraley hit enough against higher-level pitching to take full advantage of his speed? Time will tell. . . and for most, waiting it out will be a tough sell.
More Fantasy News