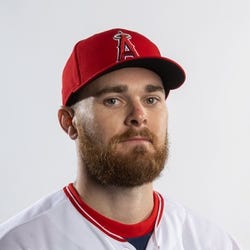 Out
Injury Shoulder
Est. Return 3/1/2023
2022 Stats
AVG
.215
HR
15
RBI
44
R
41
SB
2
2023 Projections
AVG
HR
RBI
R
SB
Unlock Our Projections
2023 Fantasy Outlook
Walsh had a strong first full season in the majors in 2021 with 29 homers, 98 RBI and an .849 OPS, but he cratered last year and posted a .215/.269/.374 slash line. He also required surgery to address thoracic outlet syndrome and missed the final month of the season, though it's unclear how much the injury affected his 2022 production. The first baseman's strikeout rate spiked to 30.4 percent, while his walk rate fell to 6.0 percent. Pitchers attacked the strikezone more against him last year, and his contact rate dropped more than two percentage points. He was expected to provide some lineup protection for Mike Trout and Shohei Ohtani but instead regressed significantly. Walsh is a strong rebound candidate in 2023 but comes with significant risk for fantasy managers after his poor production last year, so he shouldn't be counted on as more than a depth option, albeit with a higher ceiling. Read Past Outlooks
read more
RANKS
#

* Exit Velocity and Barrels/PA % are benchmarked against 2019 data (min 400 PA) and Hard Hit Rate is benchmarked against last season's data (min 400 PA). See here for more exit velocity/barrels stats plus an explanation of current limitations with that data set.
BB/K
0.20
BB Rate
5.9%
K Rate
30.4%
BABIP
.281
ISO
.158
AVG
.215
OBP
.269
SLG
.374
OPS
.642
wOBA
.280
Exit Velocity
90.1 mph
Hard Hit Rate
34.7%
Barrels/PA
5.9%
Expected BA
.221
Expected SLG
.368
Sprint Speed
21.6 ft/sec
Ground Ball %
45.4%
Line Drive %
18.1%
Fly Ball %
36.5%
Advanced Batting Stats
Loading Advanced Batting Stats...
Additional Stats
Games By Position
Defensive Stats
Loading Games Played by Position...
Loading MLB Defensive Stats...
Batted Ball Stats
Loading Batted Ball Stats...
Stats Vs Upcoming Pitchers
Want more matchup stats?
View Jared Walsh vs. Pitcher Stats
Loading Matchup Stats...
Angels Depth Chart
Our full team depth charts are reserved for RotoWire subscribers.
Subscribe Now
Recent RotoWire Articles Featuring Jared Walsh
MLB Barometer: End-of-Season Risers and Fallers
63 days ago
63 days ago
For his end-of-year-wrap-up, Erik Halterman goes by round to list his risers to see how they performed vs. their earned auction value ranking, starting with Mookie Betts in Round 1.
AL FAAB Factor: Waiver Pickups of the Week
89 days ago
89 days ago
Erik Siegrist takes a look at the AL free-agent pool as Kerry Carpenter heats up for the Tigers.
AL FAAB Factor: Waiver Pickups of the Week
96 days ago
96 days ago
Erik Siegrist checks out the American League waiver wire after September roster expansion as Gunnar Henderson provides a boost to Baltimore's playoff push.
MLB Barometer: Risers & Fallers
102 days ago
102 days ago
Erik Halterman kicks off this week's risers and fallers with a pair of veteran hitters who have reached another level in recent weeks, including Paul Goldschmidt.
Past Fantasy Outlooks
2022
2021
2020
Walsh had his coming-out party in 2020 with nine homers in 32 games. He kept the power production going into 2021, but how he got to those stats changed quite a bit. His strikeout rate nearly doubled from 13.9% to 26.0%. The 26% is more in line with his minor-league numbers. He was able to maintain a similar batting average (.293 vs. .277) by raising his BABIP from .256 to .335. While he's an acceptable hitter, it would be nice if he could lower his 48.3 GB% and thereby generate a few more home runs (see Vlad Jr.). Walsh is a nice fall-back option at first base. He may not have the 50-homer upside of some other first basemen, but his batting average (.271 for his career) is not a drag.
Walsh struggled out of the gate last season, going 0-for-10 before an Aug. 3 demotion to alternate camp. Upon returning to the big club nearly four weeks later, the first baseman opened eyes around the league -- and in fantasy circles -- with a dominant finish during which he slashed .326/.357/.719 with nine home runs in 98 PA. Walsh's much-hyped power was on full display as he led all big-league hitters who logged at least 100 PA with an overall .354 ISO and ranked second with a .646 SLG. What's more, he was rarely fooled at the plate, posting a superb 13.9 K%. A glance at Walsh's minor-league stats suggests that the contact numbers are likely to regress, but the power is legitimate. He'll have to cede the occasional start to Albert Pujols for one more season, but Walsh could be a draft-day steal if he's able to carry his September magic into 2021.
Shohei Ohtani is not the only slugger in the Angels organization to double as a pitcher. Walsh has shown legitimate potential as a lefty reliever over the past two seasons, compiling a 3.38 ERA and 7.7 K/9 in 18.2 innings at three minor-league levels and holding his own in five major-league innings in 2019. Walsh's ability to pitch is a unique twist to his status as a power-hitting first-base prospect. Since 2018, he has racked up 65 home runs and 185 RBI while batting .298 in the minors. Though he struggled to make contact (40.2 K%, 68.8 Contact%) during his first taste of the big leagues last season, Walsh did flash power with a 54.5% hard-hit rate and 91.3 mph average exit velocity. Walsh is likely to be a platoon player in 2020 with Albert Pujols still in the picture, but if he is able to reduce his strikeout rate and utilize his raw power, he could force his way into more playing time.
More Fantasy News