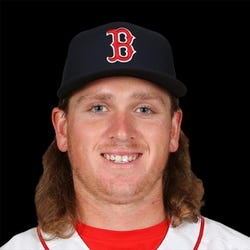 2022 Stats
W-L
0-0
ERA
0.00
WHIP
0.00
K
0
SV
0
2023 Projections
W-L
ERA
WHIP
K
SV
Unlock Our Projections
2023 Fantasy Outlook
Groome has thus far been unable to meet the lofty expectations that come with being the 12th overall pick in the 2016 MLB Draft. He was at least healthy last season, logging a professional-high 144 innings between Double-A and Triple-A. That's almost as much as he compiled over the previous six years combined, as his 2018 campaign was wiped out by Tommy John surgery and 2020 was a loss due to Covid-19. Groome's 2022 surface numbers (a 3.44 ERA and 1.33 WHIP) aren't exactly eye-opening, and they came with a paltry 8.8 K/9 -- the first time as a pro he's failed to reach a strikeout per inning. A drop in velocity is largely to blame, as Groome's fastball now typically sits in the 89-92 mph range rather than in the mid-90s as was the case before the TJ surgery. A trade to San Diego will give the lefty a bit of a clean slate, but it's hard to envision him as more than a back-end starter given the diminished velocity and lack of a true plus-pitch. Read Past Outlooks
read more
League AAA
Bats L
Throws L
40 Man Yes
Height 6'6"
Weight 220
DOB 8/23/1998
Born Toms River, NJ
College None
Drafted 1st Rd 2016 BOS
$Traded to the Padres in August of 2022.

Calculate Stats Over Time
Just click on any two dates.
Loading Minor League Pitching Game Log...
Prospect Rankings History
Advanced Pitching Stats
Loading Advanced Pitching Stats...
Defensive Stats
Loading MLB Defensive Stats...
Stats Vs Today's Lineup
Want more matchup stats?
View Jay Groome vs. Batter Stats
Loading Matchup Stats...
Padres Depth Chart
Our full team depth charts are reserved for RotoWire subscribers.
Subscribe Now
Recent RotoWire Articles Featuring Jay Groome See More
Rookie Pitcher Tiers 1.0
6 days ago
6 days ago
James Anderson ranks rookie pitchers for 2023 value within tiers, and Astros righty Hunter Brown is one of four pitchers in the top tier.
AL FAAB Factor: Waiver Pickups of the Week
179 days ago
179 days ago
Erik Siegrist checks out the post-trade deadline free agent pool as Baltimore's Felix Bautista is just one of a few new potential closers in the American League.
National League Trade Deadline Reactions
180 days ago
180 days ago
Juan Soto was the headline trade in the National League, but Jeff Erickson breaks down all of the NL trades at the deadline.
American League Trade Deadline Reactions
183 days ago
183 days ago
Jeff Erickson analyzes each American League team's deals at the deadline, with Luis Castillo looking like the best player who moved from the NL to the AL.
Pitching Prospect Tiers 2.0
349 days ago
349 days ago
James Anderson ranks the best pitching prospects for 2022 in his updated tiers, with ADP and player shares, where Angels lefty Reid Detmers reigns supreme.
Past Fantasy Outlooks
2021
2018
2017
Groome is a high-pedigree prospect, drafted 12th overall in the 2016 draft. He signed for $3.65 million -- a franchise record for a drafted pitcher-- thanks to a combination of physical traits and unusual polish for a high-school prospect. At 6-foot-6 and 220 pounds, there's no doubt that Groome has the size to make it as a starter at the big-league level. However, the southpaw has been slow to develop, mostly because he dealt with back and forearm problems before ultimately being forced to undergo Tommy John surgery in the spring of 2018. Injuries combined with the lost 2020 campaign have limited Groome to no more than 55 innings in a single season and only 66 total frames in organized ball since being drafted. Now 22, Groome was added to the 40-man roster this offseason, though he's still likely at least a year away from the big leagues as he looks to refine his repertoire and control.
He only posted a 6.70 ERA in 44.1 innings (he missed 10 weeks with a lat injury) in the Sally League, but there are scouts who covered the league who say Groome was the best pitcher they saw all season. At his best he features a mid-90s fastball and one of the best curveballs in the minors. He has struggled with his command and his changeup is still a work in progress. However, as a lefty with excellent size (6-foot-6, 220 pounds) and a couple monster pitches, his dynasty-league owners would be wise to exercise patience. His father was arrested on gun and drug charges in mid July, and Groome proceeded to post a 9.00 ERA over the following four starts, so it’s possible that he was distracted over that stretch. Without a strong support system from his family, there is an extra level of risk with Groome that is not present with most high-end pitching prospects. He ended the year on the shelf with a forearm strain, so staying healthy and building up his innings will be imperative in 2018.
Groome was selected out of Barnegat Township (N.J.) with the 12th overall pick in the 2016 draft. Some evaluators felt the left-hander was the top talent in the draft, but questions about his makeup cropped up during his senior year of high school, precipitating a draft-day slide. The Red Sox were happy to land the 6-foot-6, 220-pound Groome, whose easy delivery and preternatural curve give him a good base from which to build something special -- a potential No. 2 starter with the stuff to overshoot that projection. The fastball sits in the 93-95 mph range, topping out at 97, and could achieve greater velocity as he adds weight. At 18 years old, he already owns of one of the best curveballs in the minors, and along with his fastball he could bring two 70-grade pitches to the table as he moves up the ladder. He will work on refining his third pitch (a changeup) in the coming season. His command, which wavered during his outings in the Gulf Coast League and the one appearance at short-season Lowell, will also need to improve.
More Fantasy News