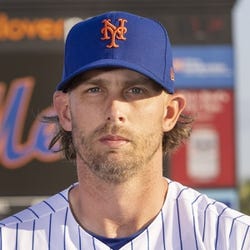 2022 Stats
AVG
.326
HR
9
RBI
62
R
73
SB
4
2023 Projections
AVG
HR
RBI
R
SB
Unlock Our Projections
2023 Fantasy Outlook
McNeil entered the season with little job security after he posted a .679 OPS in 2021 while the Mets signed Eduardo Escobar during the offseason and returned Robinson Cano from suspension, but McNeil turned things around in a resounding way and led MLB with a .326 average. He hit .319 across his first three big-league campaigns before he dropped to .251 in 2021, and in 2022 he showed the previous poor season was an aberration. The second baseman still didn't hit for much power with nine home runs, but he struck out at only a 10.4 percent clip. McNeil's counting stats were nothing special at 73 runs and 62 RBI, but that could be attributed to the fact he spent most of the year in the bottom half of the order. Leadoff man Brandon Nimmo is headed for free agency, and if he continues his career elsewhere McNeil would be a logical candidate to take over atop the order for the Mets. Read Past Outlooks
read more
RANKS
#176
ADP
#

* Exit Velocity and Barrels/PA % are benchmarked against 2019 data (min 400 PA) and Hard Hit Rate is benchmarked against last season's data (min 400 PA). See here for more exit velocity/barrels stats plus an explanation of current limitations with that data set.
BB/K
0.66
BB Rate
6.8%
K Rate
10.4%
BABIP
.353
ISO
.128
AVG
.326
OBP
.382
SLG
.454
OPS
.836
wOBA
.368
Exit Velocity
86.9 mph
Hard Hit Rate
24.5%
Barrels/PA
2.2%
Expected BA
.280
Expected SLG
.389
Sprint Speed
22.2 ft/sec
Ground Ball %
41.1%
Line Drive %
23.8%
Fly Ball %
35.0%
Advanced Batting Stats
Loading Advanced Batting Stats...
Additional Stats
Games By Position
Defensive Stats
Loading Games Played by Position...
Loading MLB Defensive Stats...
Batted Ball Stats
Loading Batted Ball Stats...
Stats Vs Upcoming Pitchers
Want more matchup stats?
View Jeff McNeil vs. Pitcher Stats
Loading Matchup Stats...
Mets Depth Chart
Our full team depth charts are reserved for RotoWire subscribers.
Subscribe Now
Recent RotoWire Articles Featuring Jeff McNeil See More
2023 Fantasy Baseball Rankings - Way Too Early Top 300 Draft Ranks
102 days ago
102 days ago
James Anderson provides a way too early top 300 rankings for those who have the itch to start drafting for 2023.
Yahoo DFS Baseball: Sunday Picks
113 days ago
113 days ago
Chris Morgan is going with Pete Alonso to lead his lineup for Yahoo's single-game Sunday MLB contests.
FanDuel MLB: Saturday Division Series Targets
114 days ago
114 days ago
Chris Morgan likes Triston McKenzie for his FanDuel lineups on a day full of elimination games.
Collette Calls: Buckle Up
115 days ago
115 days ago
Jason Collette is excited for the increase in steals which the new rules should bring next season. Which hitters and pitchers will be affected the most?
DraftKings MLB: Friday Breakdown
115 days ago
115 days ago
The playoffs have begun and Chris Morgan likes Toronto pitcher Alek Manoah, who’s been on fire, recording a 1.00 ERA over his last seven starts.
Past Fantasy Outlooks
2022
2021
2020
2019
McNeil posted an .884 OPS across his first three big-league campaigns but struggled at the plate in 2021 with a .251/.319/.360 slash line in 426 plate appearances. He hit 23 homers in 133 games during the 2019 campaign, though that power stroke looks like an aberration since he otherwise has 14 home runs in 235 major-league contests. McNeil will open the season as the Mets' primary second baseman, but Robinson Cano returning from suspension and Eduardo Escobar signing as a free agent, McNeil may not have a ton of job security if his 2022 production is similar to last season.
Many players will have a breakout in their third season in the big leagues, but it could be said that came in McNeil's second year with his big sophomore power season. His third season at the big-league level was a disappointment if you viewed 2019 as his new performance level, but a satisfactory performance if you viewed him against the backdrop of most of his minor-league career. In this day and age of low-contact and low-average hitters, McNeil shines as someone who makes excellent contact, hits the balls to all fields and will accept walks. He has a career .319 batting average and a .383 OBP spanning over 1,000 plate appearances. The expected stats do not love him, but the actual results are tough to overlook, as long as he continues to feast on fastballs (.354 BA in 2020). As good as his batting average was, it could have been even better were it not for his .146 average against breaking balls.
Even after batting .329 over his first two-plus months of MLB action in 2018, McNeil was slated to open last season in a utility role until injuries intervened. Suffice it to say, McNeil now owns a full-time lineup spot after demonstrating that the exceptional contact skills he exhibited as a rookie weren't a fluke. More surprisingly, McNeil showed he wasn't merely a slap hitter, either. He raised his barrel rate from 2.4% to 4.8%, allowing him to tap into power (62 extra-base hits) that was mostly absent from his minor-league profile. The 2019 baseball undoubtedly helped McNeil, but his high batting-average floor and spot near the top of the order are enough to make him a quality building block for fantasy teams even if the power production proves unsustainable. McNeil's eligibility at three spots (second base, third base and outfield) only burnishes his value further.
McNeil has stellar bat-to-ball ability, as evidenced by the minuscule 9.7% strikeout rate he posted with the Mets last season. Those skills helped McNeil to a .329 average after his late-July callup, which was a top-10 mark among second-half qualifiers. McNeil had a K-rate above 13.3% at only one stop on the farm (16.4% in 30 games at High-A). While there isn't a ton of pop to be found here (.142 ISO, 30.2% hard-hit rate), he uses the entire field with balanced batted-ball distribution. McNeil can also run a little. His recorded average sprint speed of 27.8 ft/sec actually wasn't very good, but he was caught stealing just once in eight attempts, giving him 13 steals total across three levels. New general manager Brodie Van Wagenen said early in the offseason that McNeil was "penciled in" as the starter at second base, but that changed after the team's acquisition of Robinson Cano. Look for McNeil to open in a utility role.
More Fantasy News