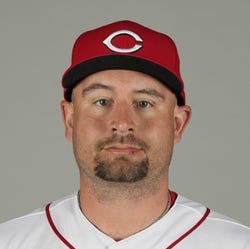 * Exit Velocity, Barrels/BBE %, Balls Hit 95+ MPH %, and Spin Rate are benchmarked against 2019 data (min 30 IP). See here for more exit velocity/barrels stats plus an explanation of current limitations with that data set.
K/BB
4.00
K/9
8.7
BB/9
2.2
HR/9
1.2
Fastball
96.1 mph
ERA
6.36
WHIP
1.40
BABIP
.354
GB/FB
1.98
Left On Base
57.3%
Exit Velocity
81.2 mph
Barrels/BBE
4.1%
Spin Rate
2158 rpm
Balls Hit 95+ MPH
21.8%
Swinging Strike
11.5%
Advanced Pitching Stats
Loading Advanced Pitching Stats...
Defensive Stats
Loading MLB Defensive Stats...
Stats Vs Today's Lineup
Want more matchup stats?
View Joel Kuhnel vs. Batter Stats
Loading Matchup Stats...
Reds Depth Chart
Our full team depth charts are reserved for RotoWire subscribers.
Subscribe Now
Recent RotoWire Articles Featuring Joel Kuhnel See More
Mound Musings: The Biggest Surprises (So Far) of 2022
227 days ago
227 days ago
Brad Johnson discusses a few pitchers making a significant positive impact so far this season, like the Yankees' Nestor Cortes, plus a few pitchers who have disappointed.
Closer Encounters: Hader's Gone Streaking
239 days ago
239 days ago
Ryan Rufe recaps the bullpen developments in May as Josh Hader is streaking in Milwaukee.
NL FAAB Factor: Waiver Pickups of the Week
August 18, 2019
August 18, 2019
Jan Levine continues to guide us along the latest path of free-agent possibilities, including some up-and-coming pitchers and a couple serviceable infielders.
Past Fantasy Outlooks
2021
2020
Shoulder discomfort in March lingered into summer camp, costing Kuhnel a chance to make the Reds' Opening Day roster. He ended up joining the club a couple times and totaling three appearances. It is essentially meaningless as a sample, but clearly the Reds did not like what they at the alternate site as they outrighted Kuhnel to Triple-A in October of 2020 after he cleared waivers. Kuhnel was used as a closer on the farm, collecting double-digit saves at three different levels, but it's unrealistic to think he could fill that role in the majors. Kuhnel will be focused simply on staying healthy and trying to get back onto the 40-man in 2021.
Kuhnel has enjoyed a relatively rapid rise to the majors, riding a breakout 2018 campaign in High-A ball to his first cup of coffee in the majors last season. Standing 6-foot-5 and armed with a mid-90s fastball capable of touching triple digits, Kuhnel fits a closer's profile and has saved 32 games over his last two minor-league seasons. His ability to throw heat hasn't yet translated to overwhelming strikeout numbers -- he has averaged less than a strikeout per inning in the minors -- but the potential is certainly there, and he did whiff nine batters in his 9.2 big-league innings last season. Kuhnel also offers better-than-average command as he has registered a 1.7 BB/9 across four minor-league campaigns. A strong spring training could help Kuhnel land a spot on the Opening Day roster, and it's not infeasible that he could soon be used in high-leverage situations given Cincinnati's shaky bullpen.
More Fantasy News