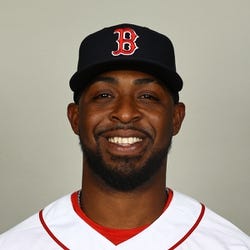 * Exit Velocity, Barrels/BBE %, Balls Hit 95+ MPH %, and Spin Rate are benchmarked against 2019 data (min 30 IP). See here for more exit velocity/barrels stats plus an explanation of current limitations with that data set.
K/BB
2.19
K/9
10.2
BB/9
4.6
HR/9
0.5
Fastball
92.8 mph
ERA
4.47
WHIP
1.35
BABIP
.315
GB/FB
2.50
Left On Base
62.7%
Exit Velocity
78.8 mph
Barrels/BBE
2.0%
Spin Rate
1590 rpm
Balls Hit 95+ MPH
20.1%
Swinging Strike
11.4%
Advanced Pitching Stats
Loading Advanced Pitching Stats...
Defensive Stats
Loading MLB Defensive Stats...
Stats Vs Today's Lineup
Want more matchup stats?
View Joely Rodriguez vs. Batter Stats
Loading Matchup Stats...
Red Sox Depth Chart
Our full team depth charts are reserved for RotoWire subscribers.
Subscribe Now
Recent RotoWire Articles Featuring Joely Rodriguez See More
Todd's Takes: Reviewing the Moves and ADP
53 days ago
53 days ago
Todd Zola breaks down the early rush of offseason moves. Does Jacob deGrom's deal with the Rangers imply anything about his health?
MLB: Postseason Cheat Sheet and Strategy
118 days ago
118 days ago
Todd Zola tackles the MLB Postseason Cheat Sheet for RotoWire and discusses his approach to postseason leagues this year.
Past Fantasy Outlooks
2021
2020
2017
2016
2015
After Rodriguez spent 2018 in the minor leagues and 2019 pitching abroad, he returned to the major leagues in 2020 as a part of the Rangers bullpen. The time away gave him the chance to replace the slider in his arsenal with a changeup. The result was a breakout campaign, as Rodriguez registered a 32.7 K% -- nearly double his previous best mark of 17.9%. Paired with a 51.7% groundball rate, Rodriguez posted a strong 2.13 ERA and 1.03 WHIP across 12 innings. Given the small-sample nature of the 2020 campaign, it's reasonable to expect pullback. For example, Rodriguez didn't allow a home run, something that is sure to change as he throws more. Even so, Rodriguez's skills provide some confidence that he will be a stable arm in the Rangers' bullpen. While not the most likely outcome, Rodriguez could factor into the saves picture given the offseason trade that sent Rafael Montero to Seattle.
Rodriguez will return stateside in 2020 after one-and-a-half seasons in Japan. He signed a two-year, $5.5 million contract with the Rangers in December, and that kind of financial commitment implies Texas is confident Rodriguez has turned a corner and will be able to make it work as a big-league reliever this time around. The southpaw was brilliant for the Chunichi Dragons in 2019, posting a 1.64 ERA, 0.93 WHIP and 77:14 K:BB in 64 relief appearances. Rodriguez allowed a mere three homers in his 60.1 innings, and limiting the long ball has always been a strength for him as an extreme groundball pitcher (58.3 GB% in majors). It's not a stretch to think Rodriguez could eventually challenge Brett Martin for the top left-handed setup role in Texas.
Rodriguez lost his 40-man roster spot in the winter after a terrible season in 2015, but he turned things around last year. The Phillies made an adjustment to his arm slot and how his foot lands when he finishes his delivery and both moves seem to have paid off. He was a combined 7-0 with a 2.35 ERA and a 69:23 K:BB in 76.2 innings between Double-A Reading and Triple-A Lehigh Valley last season while holding left-handed batters to under a .200 batting average against. He was promoted to the majors in September and was solid over 12 appearances with a 2.79 ERA and 1.24 WHIP. Rodriguez, who works in the mid-90s with his fastball, has a chance to settle in as a dominant lefty killer. The Phillies will have him compete for a bullpen spot this spring.
The Phillies picked up Rodriguez from the Pirates last offseason for Antonio Bastardo. He began the year at Triple-A Lehigh Valley after being mentioned as a possible rotation candidate in spring training. Things went south from there as he was demoted to Double-A after 13 starts and a 6.32 ERA for Lehigh Valley. Things didn't get much better at Double-A where Rodriguez had a 5.90 ERA in 19 games, eight of which were starts. It seems likely that the Phillies will move Rodriguez to a relief role permanently to see if his stuff plays up better in that role. He could get another look this spring as the Phillies will likely have an opening for a second lefty in their pen.
Rodriguez had a disastrous 2014 campaign, posting a 4.84 ERA and 1.45 WHIP in 134 innings for Double-A Altoona. The lefty didn't miss very many bats, as evidenced by a 73:43 K:BB ratio, and the team moved him to the bullpen by mid-July. He's still only 23 years of age and was making his first appearance in Double-A, so there's still a chance he can turns things around with the Phillies following a December trade. In the meantime, however, there's no reason for fantasy owners to rush out and pick up the Dominican product.
More Fantasy News