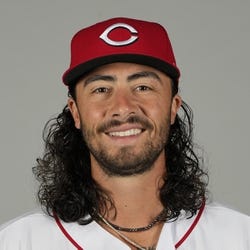 2022 Stats
AVG
.249
HR
10
RBI
41
R
48
SB
3
2023 Projections
AVG
HR
RBI
R
SB
Unlock Our Projections
2023 Fantasy Outlook
After being named National League Rookie of the Year in 2021, India injured his hamstring a week into the season and landed on the injured list. He returned a couple weeks later only to wind up back on the IL in short order with the same injury. From there he battled a number of aches and pains, mostly the result of his many hit-by-pitches along with some foul balls off his body. India was plunked 14 times in 431 plate appearances last season after leading the NL in HBPs in his rookie year with a whopping 23. That aspect of his game adds to his injury risk, but India put together a red-hot stretch from July to September in which he hit .306/.376/.505 across 52 games and reminded everyone that he's a high-level talent. We know India likes to run and the short porch in left field at Great American Ball Park is conducive to right-handed power. Read Past Outlooks
read more
RANKS
#181
ADP
#

* Exit Velocity and Barrels/PA % are benchmarked against 2019 data (min 400 PA) and Hard Hit Rate is benchmarked against last season's data (min 400 PA). See here for more exit velocity/barrels stats plus an explanation of current limitations with that data set.
BB/K
0.33
BB Rate
7.2%
K Rate
21.8%
BABIP
.305
ISO
.130
AVG
.249
OBP
.327
SLG
.378
OPS
.705
wOBA
.316
Exit Velocity
85.1 mph
Hard Hit Rate
25.7%
Barrels/PA
3.2%
Expected BA
.238
Expected SLG
.353
Sprint Speed
22.7 ft/sec
Ground Ball %
41.2%
Line Drive %
22.7%
Fly Ball %
36.1%
Prospect Rankings History
View Complete Jonathan India Prospect Ranking History
Advanced Batting Stats
Loading Advanced Batting Stats...
Additional Stats
Games By Position
Defensive Stats
Loading Games Played by Position...
Loading MLB Defensive Stats...
Batted Ball Stats
Loading Batted Ball Stats...
Stats Vs Upcoming Pitchers
Want more matchup stats?
View Jonathan India vs. Pitcher Stats
Loading Matchup Stats...
Reds Depth Chart
Our full team depth charts are reserved for RotoWire subscribers.
Subscribe Now
Recent RotoWire Articles Featuring Jonathan India See More
Collette Calls: 2023 AL East Bold Predictions
15 days ago
15 days ago
Jason Collette shares his bravest takes on 10 AL East players, including arguments for buying Brandon Lowe and passing on Carlos Rodon.
Past Fantasy Outlooks
2022
2021
2020
2019
India demonstrated in his NL Rookie of the Year campaign that hard work can pay off. His work ethic drew raves in the Reds' alternate training site in 2020, both at the plate and in learning second base. That carried over to an electric spring training, which prompted the Reds to rearrange their infield to make room for his bat, moving Eugenio Suarez to shortstop and Mike Moustakas to third, with India at second base. After struggling the first two months, India caught fire in June and claimed the leadoff spot, hitting .275/.383/.482 there. India added some category juice to go along with the solid rate stats, swiping 12 bases, slugging 21 homers and scoring 98 runs. Opposing pitchers threw fastballs 55.7% of the time against India, where he hit .302 and slugged .525, compared to .225/.351 against breaking pitches, so look for the pitch mix to change against him in 2022.
India is a highly-rated prospect in the Cincinnati organization, but one with some question marks. He had health issues in 2019 (wrist) and 2020 (lat) that cut into his development time. While he was reportedly more impressive at the plate at the Reds alternate training site than he was in 2019, that's not saying a whole lot and he wasn't facing many quality arms this past summer. Additionally, he projects as a below-average defender at third base and second base, leading to concerns about his defensive utility. Heading into his age-24 season, India needs to handle upper-level pitching. If he does, he could make his MLB debut this summer in a part-time capacity or as an injury replacement. A David Bote type of second-division role seems like a reasonable floor, with room to eclipse that if he can unlock more power at the plate.
India's breakout junior year at Florida that led to the Reds selecting him with the No. 5 overall pick in 2018 looks like the outlier. Some of the criticism of him has been overblown -- his .256/.346/.410 line in the pitcher-friendly Florida State League does not look great, but he was the ninth-best hitter on the circuit (125 wRC+). He was even better in the Southern League (138 wRC+), but it's the nature of his production that is underwhelming, especially for those in batting average leagues. He hasn't hit for much power and his .270 BA at Double-A was a career high. Additionally, his body has gotten worse, losing much of the explosiveness that allowed him to play shortstop in college. The Reds sent him to the Arizona Fall League, where his .587 OPS ranked 47th out of 57 qualified hitters. India will get to the big leagues, likely in 2021, but his ceiling no longer looks worthy of a top-five draft pick.
Last year's No. 5 overall pick confirmed positive biases in his initial Appy League assignment. However, it will be his 27-game run in the Midwest League that garners the most attention from those in dynasty-league drafts. As one of the most advanced college hitters in the draft, he deserved a taste of Low-A in his debut year, and was 14 percent better than league average despite hitting .229, as he worked the count (11.6 BB%) and hit for power (.167 ISO). Over his final 13 games, India's BABIP (.344) normalized and he hit .277/.370/.511. He looks to do damage to the pull side when he gets his pitch -- an aggressive approach that will lead to plenty of strikeouts, but could result in Cody Bellinger-esque production in the big leagues. Like Bellinger, India is a versatile defender (capable of playing everywhere in the infield) with good speed and instincts on the bases. His surface stats could lead to an unwarranted discount in first-year player drafts.
More Fantasy News