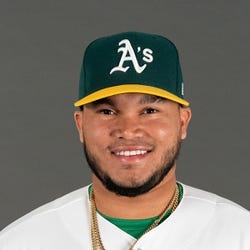 2022 Stats
AVG
.265
HR
0
RBI
1
R
3
SB
0
2023 Projections
AVG
HR
RBI
R
SB
Unlock Our Projections
2023 Fantasy Outlook
In most organizations, a player with Diaz's limited physical tools and defensive utility would be an afterthought in fantasy. However, as one of the best pure hitters in an Oakland system that is severely lacking in young big-league-ready position players, he is worth taking a look at. It's kind of a Jose Miranda lite type of profile. Diaz got more starts at designated hitter than anywhere else in the minors last year while playing more at the keystone in the majors, which is where he will be eligible in fantasy entering the year. He hit .326/.366/.515 with a 14.4 K% and 5.3 BB% as a 21-year-old across Double-A and Triple-A. Diaz's Triple-A output is greatly helped by the hitter-friendly conditions of the Pacific Coast League, but his contact skill immediately translated in the majors (13.7 K%). Obviously he is better in AVG leagues than OBP leagues, and there is no speed to speak of, but Diaz should play a lot for the A's this season as long as he hits for a modicum of power. Read Past Outlooks
read more
RANKSFrom Preseason
#