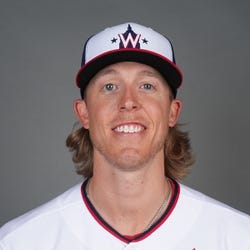 * Exit Velocity, Barrels/BBE %, Balls Hit 95+ MPH %, and Spin Rate are benchmarked against 2019 data (min 30 IP). See here for more exit velocity/barrels stats plus an explanation of current limitations with that data set.
K/BB
3.42
K/9
9.3
BB/9
2.7
HR/9
1.6
Fastball
96.9 mph
ERA
5.22
WHIP
1.18
BABIP
.283
GB/FB
0.83
Left On Base
61.8%
Exit Velocity
82.1 mph
Barrels/BBE
2.5%
Spin Rate
2085 rpm
Balls Hit 95+ MPH
17.5%
Swinging Strike
12.8%
Advanced Pitching Stats
Loading Advanced Pitching Stats...
Defensive Stats
Loading MLB Defensive Stats...
Stats Vs Today's Lineup
Want more matchup stats?
View Jordan Weems vs. Batter Stats
Loading Matchup Stats...
Nationals Depth Chart
Our full team depth charts are reserved for RotoWire subscribers.
Subscribe Now
Recent RotoWire Articles Featuring Jordan Weems See More
Dream11 Fantasy Baseball: Athletics at Giants
August 13, 2020
August 13, 2020
juan Pablo Aravena breaks down Friday's Athletics at Giants game for Dream11 contests.
Dream11 Fantasy Baseball: Astros at Athletics
August 8, 2020
August 8, 2020
Juan Pablo Aravena breaks down Sunday's Astros at Athletics game for Dream11 contests.
Past Fantasy Outlooks
2021
2012
It was a successful debut for Weems in 2020, working his way to a 3.21 ERA, 1.21 WHIP and an 18:7 K:BB across 14 innings. His strikeout rate was also noticeably impressive, sitting at 31% for the year. Weems has several weapons at his disposal, including a fastball that sits around 95 mph, along with a splitter, slider and curveball. He leans primarily on his fastball, a pitch her threw 62.2% of the time in 2020. The 28-year-old could be in a position to earn high-leverage opportunities heading into the 2021 campaign, especially following the departure of the team's top reliever, Liam Hendriks, in free agency, though the makeup and roles within Oakland's bullpen is still very much unknown.
Weems is considered a bit lean and lanky at this point, so he'll need to add some strength to his frame if he's to stick as a catcher. He's pretty quick in his reactions behind the plate, but he still has some ways to go in the areas of throwing and getting out of the crouch. As a hitter, he projects to be a better-than-average hitter with similar power potential. When the team heads north in April, look for Weems to remain in extended spring training in Florida, where he can work on his defensive shortcomings and add some strength. He should see Short-Season Lowell in June.
More Fantasy News