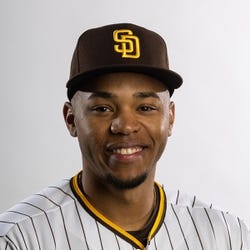 2022 Stats
AVG
.257
HR
0
RBI
10
R
24
SB
5
2023 Projections
AVG
HR
RBI
R
SB
Unlock Our Projections
2023 Fantasy Outlook
Azocar finally got his first taste of the big leagues last season and received a substantial amount of playing time, logging 216 plate appearances over 98 games. As those numbers suggest, much of his work came as a pinch hitter/runner and as a defensive replacement. While he had a few memorable moments at the plate, Azocar didn't make much of an impression with his bat, posting an 81 wRC+ and .075 ISO. The latter is no surprise -- Azocar's approach doesn't portend much power -- but it's concerning that he was able to translate his 96th percentile sprint speed to only five stolen bases in 11 attempts. There's certainly room to grow in that area, though Azocar also needs to work on his ability to take a walk to maximize his base-stealing potential. Defense and speed will be his tickets to sticking in the majors, and his most likely career path is as a reserve outfielder. Read Past Outlooks
read more
RANKS
#600
ADP
League Majors
Bats R
Throws R
40 Man Yes
Height 5'11"
Weight 189
DOB 5/11/1996
Born Sucre, Venezuela
College None
Drafted 2012 DET
$Signed a one-year, minor-league contract with the Padres in November of 2020.