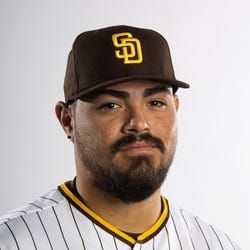 * Exit Velocity, Barrels/BBE %, Balls Hit 95+ MPH %, and Spin Rate are benchmarked against 2019 data (min 30 IP). See here for more exit velocity/barrels stats plus an explanation of current limitations with that data set.
K/BB
1.00
K/9
9.0
BB/9
9.0
HR/9
0.0
Fastball
94.8 mph
ERA
9.00
WHIP
2.00
BABIP
.355
GB/FB
2.00
Left On Base
50.0%
Exit Velocity
81.6 mph
Barrels/BBE
14.3%
Spin Rate
2343 rpm
Balls Hit 95+ MPH
42.9%
Swinging Strike
18.8%
Advanced Pitching Stats
Loading Advanced Pitching Stats...
Defensive Stats
Loading MLB Defensive Stats...
Stats Vs Today's Lineup
Want more matchup stats?
View Jose Castillo vs. Batter Stats
Loading Matchup Stats...
Padres Depth Chart
Our full team depth charts are reserved for RotoWire subscribers.
Subscribe Now
Past Fantasy Outlooks
2021
2020
2019
2018
Castillo's 2020 season was over before it could begin. The lefty went down during an intrasquad game in July and was diagnosed with a Grade 2 lat strain, with the injury ultimately forcing a move to the 45-day IL and costing him the entire year. That was after he missed nearly all of 2019 with a forearm flexor strain and a tendon tear in his left hand. The Padres reinstated Castillo to the 40-man roster in November of 2020 and made a point to say that he was healthy heading into the winter. He showed a lot of promise in 2018, riding his fastball-slider combo to a 34.7 K% and 14.0 SwStr% in his first spin around the majors. Castillo is now a wild card given we have barely seen him over the past two seasons. If he's finally healthy, he should be a big difference-maker in the late innings for San Diego.
Castillo pitched 7.2 innings during the 2019 season around two major injuries. He missed most of the year with a left forearm flexor strain, only to come back from that and tear a tendon in his pitching hand. When he was healthy in 2018, Castillo was absolute death to lefties (.133/.220/.133) and held his own very well against righties (.189/.270/.333) over 38.1 innings of work. The San Diego bullpen has become more crowded over the past 12 months, but Castillo's ability to handle lefties and righties should serve him well as long as his pitching arm is in good shape. While he may be best utilized as a lefty specialist in 2020, especially with Drew Pomeranz now on the roster to provide a late-inning lefty, the new usage rules could give Castillo a jump in production and perhaps some value in deep NL-only leagues as a ratios play who can vulture the occasional win.
Castillo reached the majors for the first time as a 22-year-old in June and looked like he belonged, tossing 38.1 innings with a 3.29 ERA. His FIP came in even lower at 2.64 as Castillo had an excellent 34.7% strikeout to go along with an 8.0% walk rate. He absolutely dominated lefties, holding the 50 he faced to a .333 OPS, and he was no slouch against righties (.603 OPS he allowed in 100 plate appearances). Castillo should fill a high-leverage role in the Padres' bullpen from the start of the season this time around. His handedness could hurt his chance of getting save opportunities, though the Padres used lefty Brad Hand as closer recently. It's unlikely that he'll get the job to start the season, but he'll be a name worth knowing should Kirby Yates and Craig Stammen disappoint, break down or get traded.
A throw-in in the 2014 Wil Myers trade, Castillo reached the Double-A level late last season as a 21-year-old and showed enough in 47 total appearances to warrant Rule 5 protection. Walks have held him back some (4.2 BB/9 at High-A last year), but an uptick in strikeouts over the past two years has helped him limit the damage from the free passes. The lefty was excellent against same-handed hitters last season with Lake Elsinore, holding them to a .197 average and 1.03 WHIP (23:6 K:BB). He touches the mid-90s with his fastball and has been mostly healthy since missing nearly all of 2014 with an arm injury. There are a trio of capable southpaws on the Padres' roster behind Brad Hand (Buddy Baumann, Jose Torres, Kyle McGrath), but with Castillo now on the 40-man roster, he will likely be among the top candidates to come up when bullpen reinforcements are needed.
More Fantasy News