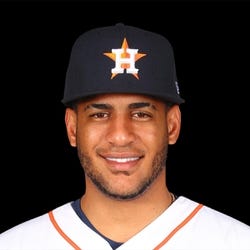 2022 Stats
AVG
.213
HR
7
RBI
24
R
53
SB
14
2023 Projections
AVG
HR
RBI
R
SB
Unlock Our Projections
2023 Fantasy Outlook
Siri had a .542 OPS in 48 games for the Astros before he was traded to the Rays at the trade deadline, and he worked as Tampa Bay's primary center fielder the rest of the way. He had a .241/.292/.367 slash line with four home runs and eight steals in 56 games for the Rays and could open 2023 as the Opening Day starter in center fielder. Siri had a 33.2 percent strikeout rate between Houston and Tampa Bay last season, as he's been unable to shed the swing-and-miss issues he showed in the upper minors. The Rays have moved on from Kevin Kiermaier, but the team may not be contest with Siri in center field for long, especially if his strikeout rate remains untenable. Read Past Outlooks
read more
RANKSFrom Preseason
#

* Exit Velocity and Barrels/PA % are benchmarked against 2019 data (min 400 PA) and Hard Hit Rate is benchmarked against last season's data (min 400 PA). See here for more exit velocity/barrels stats plus an explanation of current limitations with that data set.
BB/K
0.19
BB Rate
6.2%
K Rate
33.2%
BABIP
.305
ISO
.126
AVG
.213
OBP
.268
SLG
.339
OPS
.607
wOBA
.270
Exit Velocity
87.2 mph
Hard Hit Rate
23.4%
Barrels/PA
3.7%
Expected BA
.207
Expected SLG
.323
Sprint Speed
24.1 ft/sec
Ground Ball %
42.6%
Line Drive %
21.1%
Fly Ball %
36.3%
Prospect Rankings History
View Complete Jose Siri Prospect Ranking History
Advanced Batting Stats
Loading Advanced Batting Stats...
Additional Stats
Games By Position
Defensive Stats
Loading Games Played by Position...
Loading MLB Defensive Stats...
Batted Ball Stats
Loading Batted Ball Stats...
Stats Vs Upcoming Pitchers
Want more matchup stats?
View Jose Siri vs. Pitcher Stats
Loading Matchup Stats...
Rays Depth Chart
Our full team depth charts are reserved for RotoWire subscribers.
Subscribe Now
Recent RotoWire Articles Featuring Jose Siri
Collette Calls: Buckle Up
61 days ago
61 days ago
Jason Collette is excited for the increase in steals which the new rules should bring next season. Which hitters and pitchers will be affected the most?
NFBC Main Event: Fever Dream, Chapter 5
62 days ago
62 days ago
Ryan Rufe walks us through the final few weeks of his first foray into the NFBC Main Event.
MLB: Postseason Cheat Sheet and Strategy
62 days ago
62 days ago
Todd Zola tackles the MLB Postseason Cheat Sheet for RotoWire and discusses his approach to postseason leagues this year.
MLB FAAB Factor: Waiver Pickups of the Week
76 days ago
76 days ago
Jason Shebilske offers his top waiver pickups of the week, including Domingo Acevedo, who should serve as Oakland's closer down the stretch.
Collette Calls: Shifting Expectations
76 days ago
76 days ago
Jason Collette examines a handful of spray charts in search of hitters who will particularly benefit from the shift ban.
Past Fantasy Outlooks
2022
2020
2019
2018
Siri made his major-league with Houston last season and played in 21 games, hitting .304/.367/.609 with four home runs, nine RBI and three stolen bases. The 26-year-old flashed his power and speed during his brief time in the big leagues, and he also enjoyed a strong Triple-A campaign with a .921 OPS, 15 home runs and 24 steals after previously struggling in the upper minors during 2019. He'll make the Opening Day roster as a reserve outfielder, and Houston's depth is likely to limit his opportunities. Michael Brantley, Yordan Alvarez and Kyle Tucker are locked into everyday roles between designated hitter and the corner outfield spots, while Chas McCormick is set to start in center field after posting a .766 OPS during his debut campaign in 2021. Siri could provide some value if given the opportunity, but there may need to be an injury, or McCormick could struggle, for him to receive worthwhile playing time this year.
Despite a meager .251 average with Double-A Chattanooga last season, Siri was promoted to the Triple-A level for the first time. The advancement proved to be overwhelming as Siri batted .186 and struck out 39 times in 102 at-bats. That isn't exactly surprising for a player who has hit only .264 in over 2,000 minor-league at-bats while displaying inconsistent power and inflated strikeout rates. Siri has whiffed in over 30% of his at-bats in the minors and has posted contact rates in the low-mid-60s after reaching the Double-A level. That's undoubtedly frustrating for a prospect who possesses tantalizing defensive skills, plus-plus speed and above-average raw power. Siri has stolen as many as 46 bases in the minors and could approach that with enough playing time in the big leagues, but that's unlikely to happen if he proves unable to handle major league -- or even Triple-A -- pitching.
Facing a pivotal year, Siri couldn't have started 2018 on worse note. He suffered ligament damage in his left thumb crashing into the wall during spring training and began the year on the DL. He returned with a bang for High-A Daytona, going 8-for-18 with a homer and three doubles in his first four games, but then stalled, ultimately hitting .261/.280/.395 in 30 games there. Because of his age, he was promoted to Double-A Pensacola to get him closer to being on the proper track, and with that promotion also came his power. Alas, it came at the expense of him being able to hit for average. Siri's inability to make consistent contact (64% at Pensacola) bodes ill for his potential to hit big-league pitching, thus limiting the likelihood that his speed/mid-power package ever plays.
Siri's 2017 season at Low-A is a perfect example of a false positive in the prospect world. He hit 24 home runs, stole 46 bases, had a 39-game hit streak and hit .293 in his first full season above rookie ball, yet he is not a top-100 prospect for dynasty leagues. Age relative to level is extremely important when evaluating prospects, and Siri, who turned 22 in July, has not played above the Midwest League. His Dayton teammate Taylor Trammell, a top-25 prospect, is over two years younger. Vladimir Guerrero Jr., the best prospect in the Midwest League last year, is almost four years younger than Siri. It also doesn't help that Siri was barely a prospect of note before last season. The 6-foot-2, 175-pound outfielder has some exciting tools (plus-plus speed, above-average power), but his hit tool remains questionable. His 0.25 BB/K was the eighth-worst mark in the league. If he were 18 or 19, that would be fine, but given his age, he is one bad season away from essentially being a non-prospect (see Aristides Aquino).
More Fantasy News