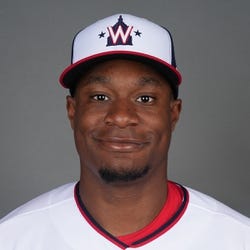 2022 Stats
W-L
7-10
ERA
5.02
WHIP
1.36
K
154
SV
0
2023 Projections
W-L
ERA
WHIP
K
SV
Unlock Our Projections
2023 Fantasy Outlook
Gray completed his first full season in the majors with 28 starts and had a 5.02 ERA, 1.36 WHIP and 154:66 K:BB across 148.2 innings. His strikeout and walk rates (23.7 and 10.2 percent, respectively) remained relatively unchanged from his first taste of the big leagues in 2021, and he also had the same HR/FB rate (18.6 percent). The subpar Washington defense didn't help his numbers, which is illustrated by his 4.57 xFIP. Now entering his age-25 campaign, the Nationals are likely banking on Gray taking a significant step forward in 2023, and he should be locked into a rotation spot as long as he stays healthy. His fantasy outlook is a bit less certain, but the potential and workload will be there in spades. Read Past Outlooks
read more
RANKS
#416
ADP
#

* Exit Velocity, Barrels/BBE %, Balls Hit 95+ MPH %, and Spin Rate are benchmarked against 2019 data (min 120 IP). See here for more exit velocity/barrels stats plus an explanation of current limitations with that data set.
K/BB
2.33
K/9
9.3
BB/9
4.0
HR/9
2.3
Fastball
94.5 mph
ERA
5.02
WHIP
1.36
BABIP
.270
GB/FB
0.77
Left On Base
79.3%
Exit Velocity
81.4 mph
Barrels/BBE
6.8%
Spin Rate
2219 rpm
Balls Hit 95+ MPH
24.2%
Swinging Strike
11.4%
Prospect Rankings History
View Complete Josiah Gray Prospect Ranking History
Advanced Pitching Stats
Loading Advanced Pitching Stats...
Defensive Stats
Loading MLB Defensive Stats...
Stats Vs Today's Lineup
Want more matchup stats?
View Josiah Gray vs. Batter Stats
Loading Matchup Stats...
Nationals Depth Chart
Our full team depth charts are reserved for RotoWire subscribers.
Subscribe Now
Recent RotoWire Articles Featuring Josiah Gray See More
Collette Calls: Beltway Pitching Projects
62 days ago
62 days ago
Jason Collette examines a pair of young starting pitchers with plenty of potential but unimpressive 2022 numbers.
Collette Calls: Pitching Bold Predictions Reviews
100 days ago
100 days ago
Jason Collette analyzes what he got right and what he got wrong with his preseason pitching predictions, including an outstanding season from Dylan Cease.
Collette Calls: Scoring Tweaks
122 days ago
122 days ago
Jason Collette advocates for more experimentation with scoring setups in order to give fantasy relevance to a larger pool of pitchers.
DraftKings MLB: Wednesday Breakdown
124 days ago
124 days ago
Dan Marcus likes Zac Gallen as a potential leverage option against Justin Verlander and the Astros on Wednesday.
Yahoo DFS Baseball: Wednesday Picks
124 days ago
124 days ago
Mike Barner’s Wednesday picks include an Angels stack of hitters against Oakland.
Past Fantasy Outlooks
2022
2021
2020
Gray reached the majors as a 23-year-old in 2021 and showed why he was a key piece in the Trea Turner deal. Gray has two excellent breaking balls that each generated whiffs 45% of the time or more and the league hit below .200 against both offerings. Those two pitches helped him strike out 25% or more of the hitters he faced at every stop throughout the minor leagues. It was not until he reached the majors that hitters became more disciplined and forced him to throw fastballs when down in the count and made him pay for it with 12 homers, a .282 average and .620 slugging percentage. All in all, he allowed 19 homers in 70.2 innings last season while struggling with his command, which marked the first time he had any such struggles to that extent. More consistent fastball command could allow him to take a big step forward in 2022 as a guaranteed member of the Nationals' rotation.
It's been a couple years since the Dodgers swindled the Reds in the deal that sent Gray to Los Angeles. They already flipped Jeter Downs to get Mookie Betts and Gray should start making an impact in the majors early this season. The converted shortstop has only been pitching full time for a few years, so it's quite the feat that he is not only close to big-league ready, but that he is a good bet to have a long career as a starting pitcher. The 6-foot-1 righty has a trio of above-average to plus offerings (fastball, slider, changeup) and his athleticism allows him to command his pitches quite well. He could have debuted last year if there was a need, and the Dodgers' internal depth could result in his debut coming as a swingman or reliever -- Dustin May's usage over the past couple years should be instructive. That usage may be frustrating early on, but eventually he should settle in as a rotation fixture.
From a fantasy standpoint, Jeter Downs was the jewel of the Dodgers' return from Cincinnati for Yasiel Puig, but Gray might have more real-life value. An athletic 6-foot-1 righty who has only been working as a starter for two years (dating back to college), Gray's mid-90s fastball remains his top offering, but his above-average slider and average changeup improved in his first full season. He does not generate groundballs at a high clip, but could end up with plus command/control. Gray climbed from Low-A (21.6 K-BB%) to High-A (25.1 K-BB%) and finished the year with an impressive run (18.6 K-BB%) as one of the youngest pitchers in the Texas League. The fact that he has come this far in less than two years in pro ball is incredibly impressive, and suggests that there is still more room for growth. He could reach the majors this summer as a reliever/swing man and could join the rotation full time in 2021.
More Fantasy News