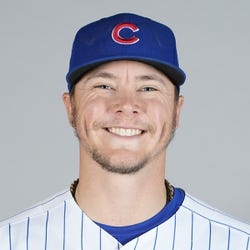 2022 Stats
W-L
4-7
ERA
3.18
WHIP
1.35
K
126
SV
0
2023 Projections
W-L
ERA
WHIP
K
SV
Unlock Our Projections
2023 Fantasy Outlook
Steele took a big step forward in 2022 and could be emerging as a staple of Chicago's rotation in the coming years. The lefty made 24 starts and posted a 3.18 ERA and 126 strikeouts across 119 innings. That ERA was supported by a 3.20 FIP, so Steele's production seems sustainable. His last appearance came in late August, however, as a back issue flared up and the Cubs decided not to push him when they had little to play for. That will probably benefit Steele heading into 2023, as he should be healthy to begin the season. Marcus Stroman should continue to lead the rotation followed by Hendricks, though the latter is dealing with a shoulder injury over the offseason. That leaves Steele as the No. 3 starter with the potential to move up. As a southpaw who can miss bats, Steele could be in store for a nice fantasy season, particularly if he can build on his career-best workload from 2022. Read Past Outlooks
read more
RANKS
#300
ADP
League Majors
Bats L
Throws L
40 Man Yes
Height 6'2"
Weight 205
DOB 7/11/1995
Born Lucedale, MS
College None
Drafted 5th Rd 2014 CHC
$Signed a one-year contract with the Cubs in March of 2022.

* Exit Velocity, Barrels/BBE %, Balls Hit 95+ MPH %, and Spin Rate are benchmarked against 2019 data (min 120 IP). See here for more exit velocity/barrels stats plus an explanation of current limitations with that data set.
K/BB
2.52
K/9
9.5
BB/9
3.8
HR/9
0.6
Fastball
92.2 mph
ERA
3.18
WHIP
1.35
BABIP
.330
GB/FB
1.99
Left On Base
72.1%
Exit Velocity
79.6 mph
Barrels/BBE
2.4%
Spin Rate
2534 rpm
Balls Hit 95+ MPH
18.7%
Swinging Strike
10.3%
Advanced Pitching Stats
Loading Advanced Pitching Stats...
Defensive Stats
Loading MLB Defensive Stats...
Stats Vs Today's Lineup
Want more matchup stats?
View Justin Steele vs. Batter Stats
Loading Matchup Stats...
Cubs Depth Chart
Our full team depth charts are reserved for RotoWire subscribers.
Subscribe Now
Recent RotoWire Articles Featuring Justin Steele See More
Collette Calls: Scoring Tweaks
122 days ago
122 days ago
Jason Collette advocates for more experimentation with scoring setups in order to give fantasy relevance to a larger pool of pitchers.
NL FAAB Factor: Waiver Pickups of the Week
141 days ago
141 days ago
Jan Levine details a few NLers riding late-season surges, including a starter in Philly who's making the most of his opportunities.
MLB FAAB Factor: Waiver Pickups of the Week
144 days ago
144 days ago
Jason Shebilske's weekly waiver column is headlined by Jose Suarez, who's pitched quite well since the All-Star break.
Weekly Pitcher Rankings: Back to Nola
149 days ago
149 days ago
Todd Zola ranks this week's starting pitchers, with Aaron Nola taking the top spot thanks to a pair of easy divisional matchups.
Past Fantasy Outlooks
2022
2016
Steele and Brad Wieck are projected as the lefties in the Cubs' bullpen, and the former finally made his major-league debut in 2021 with some bumps and bruises. The 23.8 K% was promising for a rookie, but the 10.9 BB% along with a 1.9 HR/9 offset the gains from his strikeouts. He somehow managed a respectable ERA given the recipe for disaster with the walks and allowing a homer for every four flyballs allowed. Steele can work as a swingman as he has the repertoire of a starting pitcher and worked almost exclusively as a starter throughout his minor-league career. What he lacks in velocity he makes up for with movement, and should he find better command as a sophomore, he could take a step forward and gain relevance in NL-only formats.
Steele, a fifth-round draft pick out of high school in 2014, was limited to just 40.2 innings for short-season Eugene, partially because of a minor "tweak" in his arm. Issues in the arm of young pitchers are always a concern, but the Cubs can afford to be cautious with Steele, as there is no hurry to advance him to the big-league level. Steele has a 2.73 ERA in his first two professional seasons, and they haven't been flukes, as his FIPs have been even better. The skinny 20-year-old southpaw has a decent future if he can stay healthy, but his ceiling is probably as a mid-rotation starter.
More Fantasy News